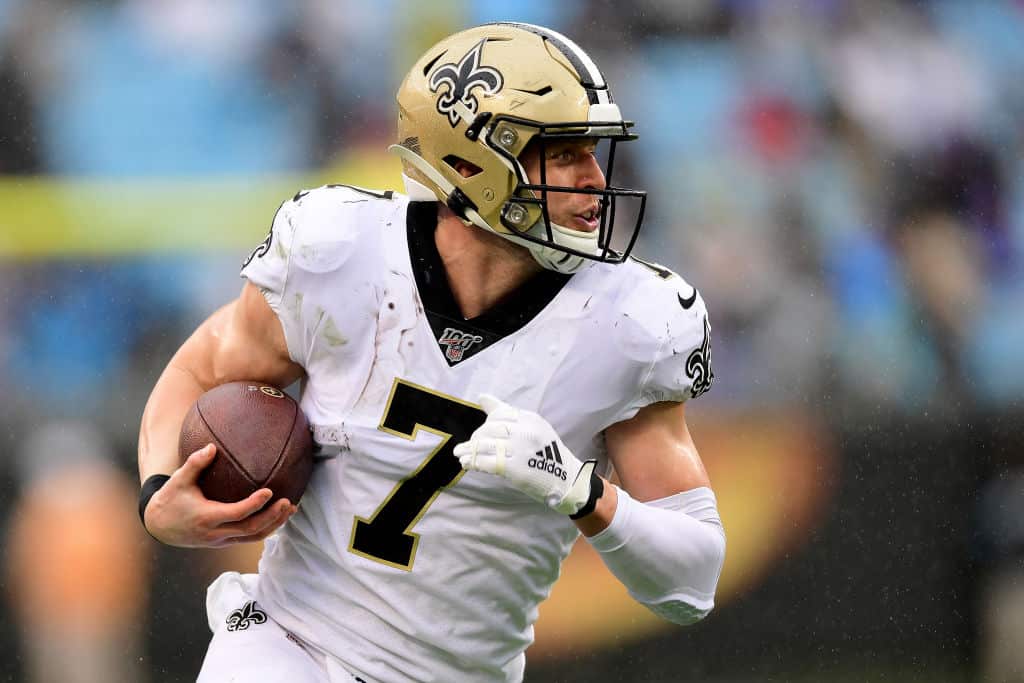 CHARLOTTE, NORTH CAROLINA - DECEMBER 29: Taysom Hill #7 of the New Orleans Saints during the second half during their game against the Carolina Panthers at Bank of America Stadium on December 29, 2019 in Charlotte, North Carolina. (Photo by Jacob Kupferman/Getty Images)
What's in this article? Click to show
NFL Week 11 Over/Under Best Bet: New Orleans Saints vs. Atlanta Falcons over 51 -105
Taysom Hill experiment continues
Other NFL Week 11 Over/Under Bet: Miami Dolphins vs. Denver Broncos under 45.5 -106

We have arrived at Week 11 of the NFL season, and the PFN betting team is back to find you some winners this Sunday. This article will focus on some of the over/under best bets my analytical model has identified as having value. We are riding high after two straight NFL over/under best bet winners, as we played the Packers/Jaguars under 49.5 last week, won in large part due to the horrid forecast that we identified. We will be sure to carry this momentum into Week 11 and keep this streak going. Be sure to bookmark the NFL betting team for all of our completely free content to help you cash during the 2020 NFL season.

Full disclosure, I made this pick initially under the impression that Jameis Winston would be the starter. Instead, Sean Payton shocked the world when he announced that quarterback and tight end combo Taysom Hill would get the start at quarterback on Sunday. This has caused sportsbooks to drop this total to around the 49-50 point range, but I still like it even with Hill at quarterback.

The Saints have struggled to keep their primary weapons on the field due to injury, but it appears they will have their full array of skill position weapons on Sunday. This horrible Falcons offense should have their hands full. On the other side of the ball, the Falcons offense has been moving the ball very well and is not the reason for the team’s 3-6 record going into Week 11. They should have no issue against this Saints defense.

Matt Ryan does not get enough credit for how consistently excellent he is, which is due in large part to his team’s unique ability to snatch defeat from the grasps of victory. He and Russell Wilson are the only quarterbacks averaging 300+ yards passing through Week 10. He has also been efficient in completing 67.2% of his passes and has limited turnovers with just five interceptions. Despite all of this, his team is only 3-6 and all but eliminated from contention in a stout NFC South.

Ryan and star wide receiver Julio Jones represent some of the only consistent assets around this Falcons organization. This duo consistently shows up both of the times they face the saints each season as well. Ryan averages 301.5 yards per game and has a 96 QBR versus his division foe in his career, and Jones has 1,175 yards through 13 games against the black and gold.

With both looking as good as ever in 2020, I see no reason why these two veterans won’t link up for a few big plays on Sunday. Expect an even more significant boost for this Falcons offense if Calvin Ridley, who is questionable, can give it a go.

The Saints defense has looked dominant in their most recent two games versus the Buccaneers and the 49ers, allowing just 16 points and forcing seven turnovers. The Saints will think that they can carry this momentum defensively into Week 11. However, I will ignore this short sample size and instead look at this defense’s season-long performance.

This paints a different picture, highlighting a defense that ranks 15th most yards per game through the air, sixth-most completions over 21 yards in the air, and 28th in passing touchdowns allowed. Look for Matt Ryan to exploit this defense for a few deep balls this Sunday, a good recipe for an over winner in our NFL over/under bets for Week 11.

For what seems like forever, the NFL world has been searching for an answer to Sean Payton’s infatuation with the erratically throwing Taysom Hill. PFN’s Mike Tanier compared Hill to the “El Camino that Payton bought at a sheriff’s auction and spends his weekends trying to polish and tune-up when he should be taking the kids to soccer practice.”

As funny as this comparison is, it is also pretty realistic, as Jameis Winston was the easy choice for starter this Sunday, and Payton still somehow found a way to justify starting Hill in Week 11.

While Hill may not be the best thrower of the ball, he is a fantastic athlete who can simply do it all, highlighted by the reps he has seen at running back, tight end, and wide receiver. In the Saints rout of the Buccaneers, Hill played 19 snaps that averaged 8.4 yards per play and +.51 EPA/play. Without Hill on the field, the Saints averaged just 4.8 yards per play and +.05 EPA/play.

It will be interesting to see if Hill playing full-time Quarterback will take some of his efficiency away. However, with a top-three offensive line and the dynamic duo of Michael Thomas and Alvin Kamara being active and healthy, this Falcon’s defense will have their hands full regardless of who plays quarterback.

With his athleticism and the many weapons around him, Hill will not need to throw exceptionally efficiently for the Saints to eclipse 27 point mark, exactly where we need to get to cash this Week 11 NFL over/under best bet. With no weather worry in the Superdome, take this over at whatever number you get it under 51 and hope that Taysom Hill is the golden boy that Sean Payton believes that he is. With the Falcons coming off a bye and their history of success offensively against the Saints, I trust them to do their part in the points department.

Have you heard that Tua is 3-0 in his first three starts of his career? Of course, you have. The rocket-armed young man from Hawaii’s success has been first-page news each week. While Tua has proved himself more than capable as a starter in the NFL, It has really been this defense that has propelled this Dolphins team to five straight wins. This defense has allowed only 17.2 points per game in those five games and allowed a total QBR of 36.

Drew Lock is questionable for the game, but this offense has been horrid regardless of who lines up at quarterback. They lead the league with 32 turnovers and average just 5.1 yards per play, 26th in the league. They have the skill position players to be a solid offense, but you cannot count on this offense for any points given their season thus far, especially against this stingy Dolphins defense that has a lot of momentum.

The Dolphins will have a conservative game plan in this game that they should win, but they will miss their bell-cow back Myles Gaskin often. This would have been my best bet if the number was just slightly higher, but it doesn’t take that many explosive plays to go over a total of 45.5. Nonetheless, I think these offenses led by young quarterbacks will struggle on Sunday, and I will be playing this under for my final NFL over/under bet for Week 11.

Follow Drew @DHaynesPFN and Pro Football Network @PFN365 on Twitter for all the best betting advice (kingscodes) for the 2020 NFL season.

In this article:matt ryan, Taysom Hill