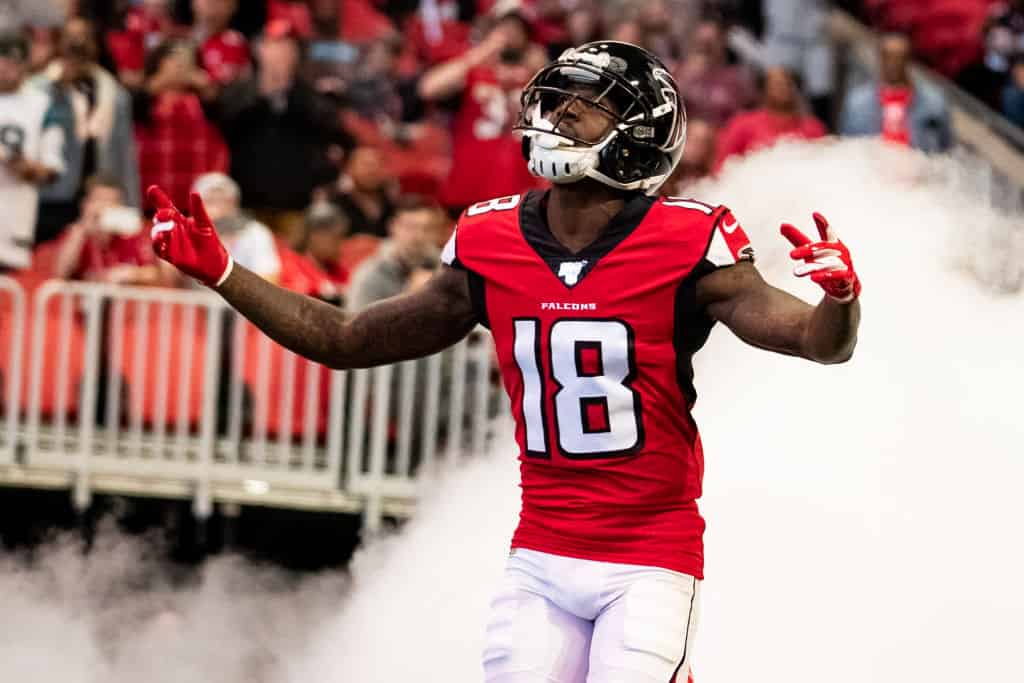 ATLANTA, GA - DECEMBER 08: Calvin Ridley #18 of the Atlanta Falcons takes the field prior to the game against the Carolina Panthers at Mercedes-Benz Stadium on December 8, 2019 in Atlanta, Georgia. (Photo by Carmen Mandato/Getty Images)
What's in this article? Click to show
Latest practice status for Calvin Ridley
Calvin Ridley back to running in Week 11, but game status is still uncertain
If Calvin Ridley plays in Week 11, he could have a monster game against the Saints
If Calvin Ridley misses Week 11 due to injury, deciphering the next option is difficult for the Falcons
Want more fantasy football analysis and news?

Following his second-year breakout in 2019, the fantasy football expectations for Atlanta Falcons WR Calvin Ridley were about as high as they could realistically be, with Ridley expected to be a WR1 in 2020. And in one of the rare instances in fantasy, Calvin Ridley has delivered on those lofty expectations, but an injury suffered in Week 8 has put a halt to his season. Could we see the return of one of the NFL’s brightest stars in Week 11 as they matchup against divisional rivals the New Orleans Saints, or will he require more time to get back on the field?

After being removed from the injury report on Friday, Calvin Ridley is active for the Atlanta Falcons Week 11 matchup with the New Orleans Saints.

Calvin Ridley back to running in Week 11, but game status is still uncertain

Falcons wide receiver Calvin Ridley, who suffered a mid-foot sprain against the Panthers on October 29, is trying to make it back to face the Saints on Sunday. Interim head coach Raheem Morris said that Ridley has resumed running with trainers and that the team will take a look at him on the field when they resume their practice schedule on Wednesday.

“We should have a better feel for him on Wednesday, getting him in here, getting him into individual drills, getting him into a little bit of team work and see how he goes, talking him through it and just seeing where he’s at little by little, step by step in order to get him to Sunday and see if we can get him going,” Morris said, this coming from D. Orlando Ledbetter of the Atlanta Journal-Constitution.

On Thursday, Ridley (foot) was a limited participant in practice. Although that is a positive first step, time is running out as Sunday is fast approaching. That said, Ridley might have gotten lucky with the timing of his injury as it occurred right before the team’s bye week, so he has only had to miss one game so far.

Despite missing a game, Calvin Ridley is the Falcons’ WR1, even with Julio Jones on the team. His 68 targets, 43 receptions, 657 yards, and six touchdowns are all team highs. It is worth mentioning that Julio Jones has played in one less game (7) but even when on the field together, this is a 1A-1B scenario with Ridley only trending even higher in fantasy value. In contrast, Jones is on the wrong side of 30 and is battling an opponent that remains undefeated, Father Time.

If Calvin Ridley plays in Week 11, he could have a monster game against the Saints

While the New Orleans Saints rank 16th in fantasy points allowed to wide receivers (37.38), Calvin Ridley could be in line for a huge day so long as he is able to get back on the field.

If you like points being scored, you should love this game. Due to Saints QB Drew Brees dealing with multiple rib fractures and a punctured lung, the team has made the switch (unofficially) to Jameis Winston as their quarterback.

The team goes from one of the most risk-averse teams to having the quarterback who loves nothing more than to sling the ball all over the field. During each of his first two seasons in the league, Jameis Winston threw for over 4,000-plus yards. Last season, he led the NFL in passing yards, throwing for 5,109 yards and 30 touchdowns while finishing as the QB5 in fantasy.

Combine the new mentality under center with the Falcons defense that has given up the second-most passing yards in the NFL (1,936), and it is likely the Falcons will be in a shootout trying to keep up, which leads right into Calvin Ridley having a phenomenal day.

Julio Jones should see coverage from Marshon Lattimore, although he is dealing with an oblique injury that needs to be monitored. Saints CB Chauncey Gardner-Johnson will likely miss this game (arm), leaving Janoris Jenkins as the remaining healthy starter for the team.

It would not surprise me at all to see Ridley cross the 100-yard mark for the fifth time this year if he is on the field.

While he sits at WR11 currently, Calvin Ridley was the WR2 in PPR at the end of Week 8. You can lock him in as a top-12 option if he is on the field this week.

If Calvin Ridley misses Week 11 due to injury, deciphering the next option is difficult for the Falcons

While conventional wisdom would say that Russell Gage would be the next man up after the start to the season he had, since Calvin Ridley’s injury, there has been no clear option for fantasy managers to target.

Since Week 8, Gage has seen the second-most targets, but it is only nine, so not nearly a large enough sample size to have any confidence moving forward. Behind him is Olamide Zaccheaus with six and Christian Blake with only five targets.

Zaccheaus has been the only other receiver in this stretch to show any real flash of ability. In Week 9, he caught four of his six targets for 103 yards and a 51-yards touchdown while leading the team in fantasy points. While it seems he has some big-play potential, I would not be willing to risk betting on him in fantasy. I feel the only safe options are Jones or Ridley for Week 11 with Russell Gage, a distant third in the WR5 territory for right now.

In this article:calvin ridley, julio jones