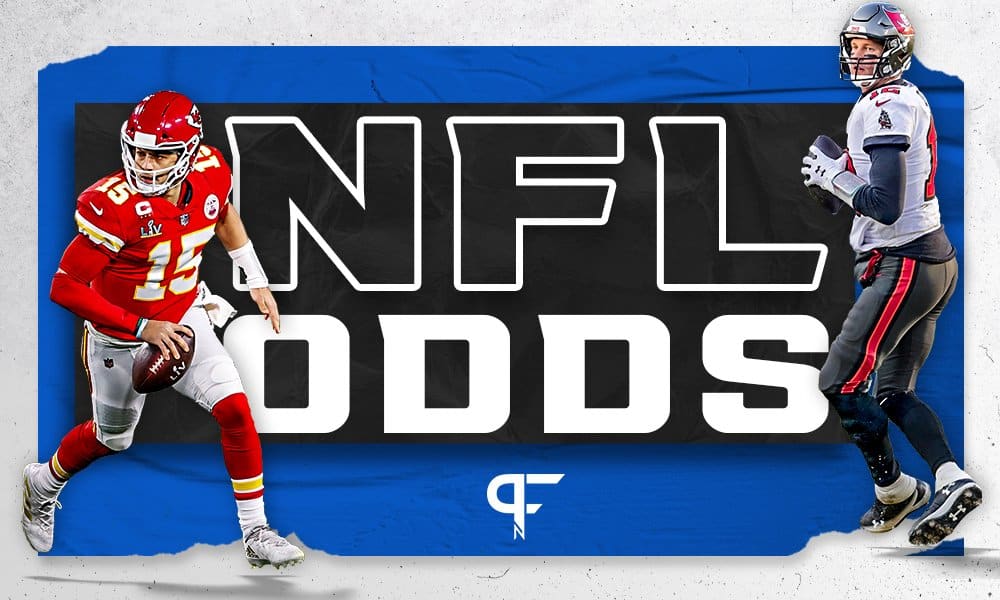 The NFL is king. It’s that simple. Even those who aren’t football fans have heard that four-word phrase uttered multiple times over the course of a lifetime. Now, interestingly, that unmistakable phrase can be slightly altered to fit another mega-industry currently exploding nationwide.

Caesars Sportsbook is one of the best NFL sports-betting mobile apps in the business. Matching its prestige, the sportsbook is currently offering an amazing $1,500 deposit match—something NFL fans should be all over:

As previously mentioned, DraftKings Sportsbook is PFN’s top choice among NFL sports bettors. It’s one of the most recognized powerhouse operators in the world — for good reason. It’s currently offering the very best in NFL odds, games, and promos, especially for the first-time NFL wagerer looking to dive in headfirst or with a single toe in the water.

What’s important to keep in mind is this: Don’t think for one moment that DraftKings Sportsbook is the only worthy platform to bet on pro football.

Several other choices are deserving of not only attention but your time and energy as well. FanDuel Sportsbook and BetMGM are just two more examples, and Pro Football Network now routinely investigates each sportsbook in order to make it easier for the NFL gambler to cut through the noise.

Follow Pro Football Network for the latest NFL betting news. From the latest Super Bowl odds to the exhilarating MVP race that seems to take shape every year, PFN has the pro football gambler covered 365 days a year.

All visible odds seen on this particular page are provided by DraftKings Sportsbook (last updated July 15, 2021):

Finally, the Super Bowl returns to Los Angeles. State of the art SoFi Stadium is set to host the first Los Angeles Super Bowl since January 1993 (the 1992 NFL season), when the Dallas Cowboys obliterated the Buffalo Bills in the first of two straight big-game matchups.

Although it’s nearly impossible to envision anybody else hoasting the Vince Lombardi Trophy these days, Tom Brady’s Tampa Bay Buccaneers aren’t leading the pack. Instead, Patrick Mahomes and the Kansas City Chiefs lead the way at +500. The following is a complete list of Super Bowl 56 odds:

A man named Brady has fouled up the odds to a considerable degree over the last two decades. This means the smart pro football bettor will dig deeper when looking at historical Super Bowl trends. Brady’s teams have taken four Super Bowl titles over the last decade while also partaking in six.

The good old days of the early 1990s made one thing very clear: The Pittsburgh Steelers and San Francisco 49ers accounted for the only two organizations to win four Super Bowls. Then, Steve Young’s Niners took Super Bowl 29 only to see the Dallas Cowboys quickly catch up a year later.

Thanks to Ben Roethlisberger, at least there’s one team, the Pittsburgh Steelers, who can claim as many rings as the New England Patriots.

In 2020, Green Bay Packers quarterback Aaron Rodgers took home his third NFL MVP award. His third-time’s-a-charm year didn’t help the unlikely Jeopardy! host in the NFC championship game, but it did move him into a second-place tie for most MVPs ever. Jim Brown, Tom Brady, Johnny Unitas, and former teammate Brett Favre are the other four with three. Only Peyton Manning can claim more MVP awards (five) than Rodgers at the moment.

The 2021 NFL MVP outlook is an interesting one from the get-go. Kansas City Chiefs quarterback Patrick Mahomes is the clear favorite at +400, which probably has to do with Rodgers’ current “jeopardizing” situation.

Rumors surrounding Rodgers and the Green Bay Packers’ future together could allow the savvy NFL sports bettor to win big this coming season. Sure, Rodgers is still in second with +1000 odds, but does he deserve that spot considering how fast Buffalo Bills quarterback Josh Allen is coming?

The likes of Peyton Manning, Tom Brady, and Aaron Rodgers have dominated the NFL MVP award for the better part of the last two decades.

Offensive Rookie of the Year Odds

Not even Mel Kiper Jr. could have predicted this. The NFL Draft has become so massive that it’s now an industry in its own right. From speculation to the combine, future projections to mock drafts (hello, PFN Mock Draft Simulator), this event delivers the one thing each of the 32 fanbases can fully consume: Hope.

The offseason delivers hope for every NFL team, whereas Week 10 of the regular season would have already buried several fanbases. 2021 is no different in this regard, and big names lead the Rookie of the Year award odds, especially on the offensive side.

Ah, yes, the “generational talent” that is Trevor Lawrence leads the pack. Once the term “generational talent” is wrestled with — I admit, I still don’t know what it means — the realization that the Jacksonville Jaguars’ new quarterback is a good one should surface. The Clemson product leads the Offensive Rookie of the Year odds at +300, well ahead of the next guy.

Zach Wilson went second to the New York Jets, so he should be second in line here, correct? Wrong.

Pittsburgh Steelers running back Najee Harris is currently holding down the second spot at +500, while San Francisco 49ers quarterback Trey Lance and Chicago Bears quarterback Justin Fields find themselves not too far behind. The Jets’ new “face of the franchise” (there goes one of those pesky terms again) is currently in the five-hole at +800.

Defensive Rookie of the Year Odds

Defensively, Dallas Cowboys linebacker Micah Parsons is currently the top dog at +400. Despite already employing a few good linebackers, Jerry Jones and company opted for the incredibly athletic Parsons in the first round of the 2021 NFL Draft.

Who doesn’t enjoy this category? The over-under game as it pertains to team win totals is one of sports bettors’ favorite football pastimes. Instead of betting one game, play the average of an entire season.

Championship Sunday always determines who plays in the biggest and most extravagant sporting event of the year. Yet, unlike the Super Bowl, the home-field advantage goes a long way in determining the AFC and NFC champions.

Could the oddsmakers currently be overshooting Tom Brady and the Tampa Bay Buccaneers right now? It’s extremely possible. Then again, they deserve the benefit of the doubt thanks to last year’s outcome. The defending champs (+300), Los Angeles Rams (+600), San Francisco 49ers (+625), and Green Bay Packers (+800) represent the four NFC favorites.

Offensive Player of the Year Odds

Welcome to the award all weapons need to shoot for each season. Unfortunately, those greedy quarterbacks gobble up the MVP awards (yes, even the Super Bowl MVP), so running backs and wide receivers have to settle for NFL Offensive Player of the Year.

It’s not like the MVP has always gone to the quarterback, but lately, the signal-caller dominance cannot be ignored. But hey, taking home the offensive or defensive version of the award is an incredible honor, nonetheless.

Tennessee Titans running back Derrick Henry earned his first in 2020 and looks to repeat the feat this coming season.

Defensive Player of the Year Odds

If Los Angeles Rams defensive tackle Aaron Donald snags his third NFL Defensive Player of the Year award in 2021, he will move into a league of his own, breaking the three-way tie with J.J. Watt and Lawrence Taylor.

Comeback Player of the Year Odds

The entire football world stopped in its tracks when Dallas Cowboys quarterback Dak Prescott went down via injury in 2020. Now, fresh off a brand-new mega-contract and great optimism in the Dallas air, America’s Team’s quarterback is the heavy favorite to take home 2021 Comeback Player of the Year honors.

Head Coach of the Year Odds

Everybody’s on the Brandon Staley train. The NFL Head Coach of the Year category seemingly always goes to an underachieving team from the year prior, and in the case of the Los Angeles Chargers, not even Staley’s rookie head-coaching status kept him away from leading the pack.

It doesn’t matter that there are just four teams per division; winning an NFL division is an incredible accomplishment. No, pro football teams don’t rush the field and pop champagne like their baseball counterparts do, but perhaps they should.

Just eight division champs in a world that hosts 32 organizations is more than worthy of over-the-top applause.

To see the Buffalo Bills predictably at -150 has old-school Jim Kelly/K-gun fans feeling the nostalgia. It’s been at least two decades since Bills Mafia could fully appreciate the consistent respect the Bills are experiencing right now.

The early surprise of the 2020 season, the Pittsburgh Steelers, are the Rodney Dangerfield of the football betting world right now. No respect. Currently, it’s a two-team race between the Baltimore Ravens and Cleveland Browns in the AFC North.

How the Indianapolis Colts lost that Wild Card matchup in Buffalo this past January is still a mystery, but the sportsbooks have them favored to take home the AFC South at +105.

Anybody other than Andy Reid’s squad capturing the AFC West in 2021 would come as a total and genuine shock.

The division that did everything possible to frustrate an entire sport was allowed back for 2021 play. (Just kidding; The NFL had no choice in the matter.) From the Dallas Cowboys’ +125 number to the Philadelphia Eagles’ +500 mark, all four teams are grouped incredibly close together.

If the AFC West sports bettors are playing Wheel of Fortune with a dominant head start, those who bravely take on the NFC North suit the very popular Jeopardy! Aaron Rodgers’ uncertain status — thanks in part to the classic game show — makes this division a complete wild card.

No Drew Brees means the NFC South becomes wildly unpredictable. Even the Carolina Panthers at +1100 is a team to look over for a considerable period of time.

Sure, the San Francisco 49ers did suffer through an incredible number of injuries a year ago, but do they really deserve top billing in the NFC West? This is the big question in this division at the moment.