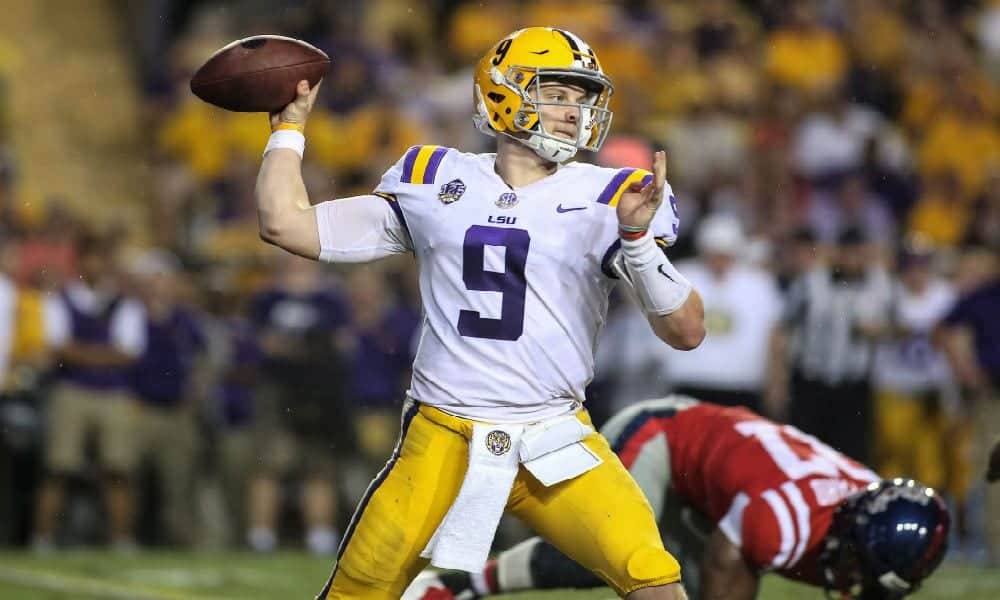 Every week, I open up the mailbag for anyone to send me their questions. This week, the mailbag includes several questions on quarterbacks and their outlook for the 2020 NFL Draft. This includes draft prospects such as LSU Tigers quarterback Joe Burrow, who has entered the Heisman Trophy race along with Oklahoma Sooners QB Jalen Hurts and Alabama Crimson Tide QB Tua Tagovailoa. We also talk about Texas Longhorns safety Brandon Jones, Utah State QB Jordan Love, Washington Huskies QB Jacob Eason, and Oregon Ducks QB Justin Herbert.

Do you have a question you want to send in? Send it to asktony@pfn365.com, and we’ll be sure to include it in an upcoming mailbag column.

Tony, I’m anxious to hear your thoughts on LSU Tigers quarterback Joe Burrow after tonight (this past Saturday). Your analysis of QBs is spot on.

Joe Burrow continues to impress everyone in and around Baton Rouge with his positive play: LSU head coach Ed Orgeron, NFL scouts, Heisman voters and anyone who watches LSU.

The fact that Florida pass rusher Jonathan Greenard left the game with an injury early on Saturday night made Burrow’s life a bit easier. Burrow had time to throw the ball, which helped him complete 87.5 percent of his passes (21 of 24) for 293 yards and 3 touchdowns. 10 of those completions went to wide receiver Justin Jefferson, who racked up 123 receiving yards and 1 touchdown. He also received a nice assist from the running game as RB Clyde Edwards-Helaire had 13 carries for 134 yards and 2 touchdowns.

Burrow has to be applauded for the way he’s exceeded expectations this season, but it’s a small body of work and he’ll face the toughest defenses of the season the next three games with Mississippi State, Auburn, and Alabama on the schedule.

I like Burrow’s athleticism, legs, arm, decision making, and ability to make plays in or out of the pocket. Everything is pointing in the right direction but there’s still a lot of college football season left.

In my opinion, no. Could that change? Possibly.

Although the Heisman Trophy candidate extended his school record of games with 20 or more completions (nine games) and has played well, the LSU Tigers QB needs to finish out the season strong.

He’ll get his chance to do so against some of the toughest defenses he’ll face, as mentioned above. After that, he’ll have to play and interview well during the Senior Bowl. The latter could be the difference-maker for Burrow being an early first-round pick or not – just ask Daniel Jones.

For more on Burrow and what the PFN Draft Staff had to say about his performance this past weekend, check out the updates from the PFN Live CFB Game Day Blog.

I noticed Chuba Robert-Shamar Hubbard wasn’t in your top-10 for your running back rankings. I was shocked by that as I thought he was better than a few on the list. Can you explain why?

Hubbard isn’t in my top ten running back rankings because he’s a redshirt freshman who plays in a wide-open system with running lanes a truck can fit through thanks to his offensive line.

The Oklahoma State Cowboys running back also only has five receptions for the season, which is another red flag, at least to this point. Ultimately, he reminds me of a faster version of Joseph Randle.

Who has hurt his stock more over the past few weeks – Utah State quarterback Jordan Love or Washington Huskies quarterback Jacob Eason?

I don’t think either of them has hurt their draft stock. Neither Love, who has led the Aggies to a 2-0 conference record in the Mountain West, nor Eason, have played horribly. Although they have been disappointing, I don’t believe a draft prospect can really hurt their draft stock over a few weeks’ time.

However, one person who has hurt his draft stock is Colorado Buffaloes starting quarterback Steven Montez. Furthermore, people are starting to get a bit turned off by the play of Oregon Ducks quarterback Justin Herbert.

It’s not that Herbert has played poorly. Rather, it’s been uninspired football and not the type of play one needs to see from a draft prospect graded as a potential franchise quarterback coming into the season. Herbert seems to play to his level of competition rather than really lifting up that Oregon offense.

I am hearing first-round draft hype on Texas Longhorns safety Brandon Jones. Do you agree?

I’ve had Brandon Jones rated higher than most since the 2018 season, but I don’t see a first-round draft prospect. I see a solid safety but not a great athlete. The earliest I think the senior safety is selected in the draft is the bottom part of round two. That said, I’ve always been a supporter.