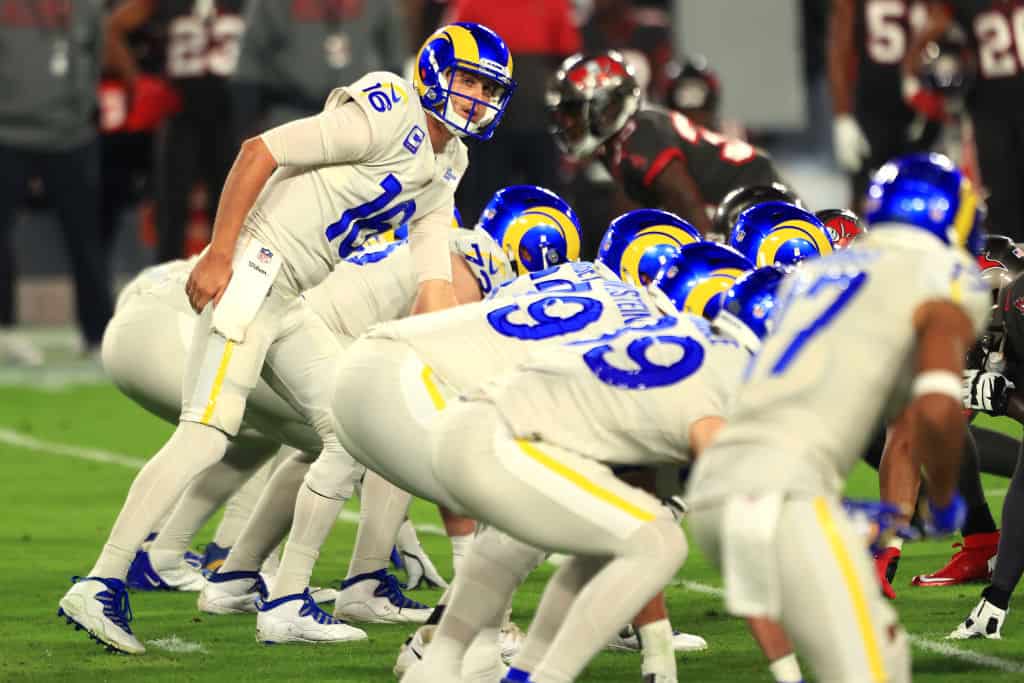 TAMPA, FLORIDA - NOVEMBER 23: Jared Goff #16 of the Los Angeles Rams calls a play against the Tampa Bay Buccaneers during the first half in the game at Raymond James Stadium on November 23, 2020 in Tampa, Florida. (Photo by Mike Ehrmann/Getty Images)
What's in this article? Click to show
Who is playing NFL games today? How and where to watch NFL games in Week 12
NFL games on TV today for Week 12
Who plays on Sunday Night Football tonight?
Who faces off on Monday Night Football?
Tuesday Night Football?

The NFL Stream and NFL Games Today TV Schedule in Week 12 features five divisional matchups. Round two of the Tennesee Titans versus the Indianapolis Colts with the winner taking control of the AFC South kicks off a Sunday filled with fascinating storylines. Many QB changes across the league due to injuries and reserve lists leave some teams in a tough spot. Can Buffalo keep up with the Dolphins on their heels? With a fresh set of games primed to go, let’s jump into your TV schedule for NFL games in Week 12.

Who is playing NFL games today? How and where to watch NFL games in Week 12

Below is a list of who’s playing today, what time the NFL games are on today, and their TV schedule and stream in Week 12. Week 12 features a one-week hiatus for bye weeks, with the final one coming in Week 13, so no teams are on a bye this week. You can see how and where to watch, but please remember to check your local listings for confirmation. For regional maps, you can click here. Be sure to check out our full 2020 NFL Schedule, which can be sorted by division, team, week, time, and more.

The Las Vegas Raiders come into Week 12 in do-or-die mode. A three-point loss to one of the best teams in the league in the Kansas City Chiefs is nothing to worry about. The worry comes with how many teams are contending in the AFC. There are currently nine teams in the AFC with a record of 6-4 or better. The Raiders must take advantage of an easy end to their season to secure a spot in the playoffs. Atlanta has been playing better football over the last few weeks, but the Raiders’ offense should be able to take advantage of a Falcons defense that is giving up 406.6 yards and 27.5 points per game.

Another playoff team needing to keep pace, Buffalo still holds the AFC East after a last-second hail mary loss to the Arizona Cardinals in Week 11. However, they must take care of business against the Los Angeles Chargers, especially with the Miami Dolphins taking on the Jets at 6-4.

The Chargers snapped a three-game losing streak but only defeated the Jets by one possession, which is a bit concerning. Interestingly enough, the only team Buffalo’s defense has held under 20 points this season has been the New York Jets. Buffalo’s offense will also be without WR John Brown and offensive lineman Cody Ford; both were placed on injured reserve with a high ankle sprain and torn meniscus, respectively. Los Angeles could pull off quite an upset today.

Cincinnati takes on NFC East opponents in back-to-back weeks but will, unfortunately, be without rookie QB Joe Burrow when they take on the New York Giants, according to the NFL games today TV schedule. Burrow suffered a torn ACL, MCL, and other structural issues in his left knee against the Washington Football Team in Week 12.

The Bengals will look to veteran QB Brandon Allen, who will make his fourth career start. The Giants need a win here to keep pace with Washington in the NFC East after Washington won on Thanksgiving. If they get out of their own way, that should be no problem, but that’s a big if.

The showdown for the AFC South. Tennessee bounced back with a win against the Ravens while the Colts kept up by taking down the Packers in Week 11. The Colts won the first matchup in Week 10, so they currently hold the tiebreaker for the AFC South lead.

While Derrick Henry rushed for 103 yards in the first game on 19 carries, the Colts managed to keep him out of the end zone and held A.J. Brown to one reception. The Titans need to open the playbook up a bit more as far as the passing game is concerned, as the Colts’ defensive front is a strong unit ready to take on Henry.

P.J. Walker got the job done for Carolina last week, but first-string QB Teddy Bridgewater makes his return to the football field in Week 12. Carolina’s rush defense has fared well in 2020, but they will face their toughest test of the season when heading to Minnesota to face off against Dalvin Cook. Cook has 580 rushing yards since the Vikings’ Week 7 bye.

According to the TV Schedule, this NFL game between the Cardinals and Patriots kicks off at 1 PM today. Arizona’s Week 11 loss to Seattle hurts – the Cardinals had the lead in the NFC West with tiebreakers but now sit one game behind both the Rams and Seahawks. This offense has a chance to rebound against an underperforming Patriots defense. The Cardinals’ offense might also need to be firing on all cylinders, as Arizona’s defense has not fared well against the run in 2020, and that’s a problem heading to New England this season.

This game has seen a fair amount of buzz in the past 24 hours, as the Dolphins downgraded rookie QB Tua Tagovailoa to doubtful for today’s game against the Jets. This means QB Ryan Fitzpatrick will start today for Miami. Fitzpatrick was at the helm of the offense in the Dolphins’ Week 6 shutout of the Jets.

RB Salvon Ahmed will also be out with a shoulder injury, forcing the Dolphins to dig even deeper into their RB room. Even with all of this commotion on the Dolphins’ offense, they should have no problem handing the Jets their 11th loss.

The Cleveland Browns take on Jaguars, Jets, and Giants in three of their games to end the season. Another AFC team hoping to clinch a wildcard berth, the Browns need to win this game to stay ahead of the Ravens in their own division.

Jacksonville’s defense is not too strong against the run and has a Browns team that averages 156.8 rushing yards per game coming to town. Jacksonville is also benching rookie QB Jake Luton in favor of veteran journeyman Mike Glennon. Things aren’t going great in Duval.

Let’s open up the late slate of games with some madness. The Broncos were forced to send all of their QBs home from practice after Jeff Driskel tested positive on Thursday, and then their three eligible QBs were determined to be high-risk close contacts to Driskel.

The Broncos’ emergency QB is RB Royce Freeman, but they have WR Kendall Hinton on the practice squad who was a QB at Wake Forest in college and will start for the Broncos. The Saints are still starting QB Taysom Hill, but that won’t matter when New Orleans’ defense takes on a fourth-string QB.

The 49ers activated DE Arik Armstead and DTJavon Kinlaw from the reserve list but will still be without OT Trent Williams and rookie WR Brandon Aiyuk. However, the more significant cause for concern in San Francisco is the absence of RG Tom Compton, who reported a concussion in walkthroughs.

That means rookie guard Colton McKivitz will get his first career start against Rams All-Pro DT Aaron Donald. The Rams are holding opposing offenses to 291.9 total yards of offense per game, the lowest in the NFL, and 19.2 points per game, the second-lowest.

According to the TV schedule, this NFL Game kicks off at 4:25 PM ET today. Tampa Bay has not played well against good defenses this season. However, Kansas City proposes a unique defensive challenge. The running game has been favorable against Kansas City’s defense, as they’ve allowed 133.5 yards per game.

However, Kansas City is letting up just 21.4 points per game, ranked seventh in the league, and they’re faring better against the pass. If Tampa’s rushing attack were better, then there would be a better chance of them taking this, but Kansas City’s offense is rolling, scoring 33-plus points in the past four weeks.

Oh, how the mighty fall, or should we say how the pretenders fall. Heading into Week 7 of the NFL season, the Bears were sitting at 5-1, tied with the Packers for the NFC North’s lead. Heading into this divisional showdown, the Bears are in freefall with a four-game losing streak.

All the problems lie on offense and their inability to move the ball consistently. With these two defenses having performed very similarly this season, this game is coming down to which offense can make plays. Aaron Rodgers will make more plays than Mitchell Trubisky, who is forced to start due to a Nick Foles hip injury.

Rounding out Week 12’s NFL Games Today TV schedule is an intriguing NFC matchup. The Seahawks need to keep pace with the Rams in the NFC West as well as the Packers and Saints, with Seattle still in position for first overall in the NFC. On the other side, the Eagles need a win to stay in contention for the NFC East after Washington’s previously mentioned Thanksgiving victory.

Is the Seattle defense just what Eagles QB Carson Wentz needs to figure out what’s going wrong? Unfortunately, the Seattle offense will play at a pace too quick for the Eagles to find out.

Unfortunately, no one knows what the status of this game will be when Tuesday night rolls around. There are 24 players currently on the reserve list heading into the game. Those players include Ravens QB Lamar Jackson, RBs Mark Ingram and J.K. Dobbins, all but three of Baltimore’s defensive linemen, Steelers RB James Conner, Pittsburgh DL Stephon Tuitt and Isaiah Buggs, and many more.

The feasibility of this game being played seems to be dwindling with every hour. Should the game go, Ravens QB Robert Griffin III will get his first start since Week 17 of last season.