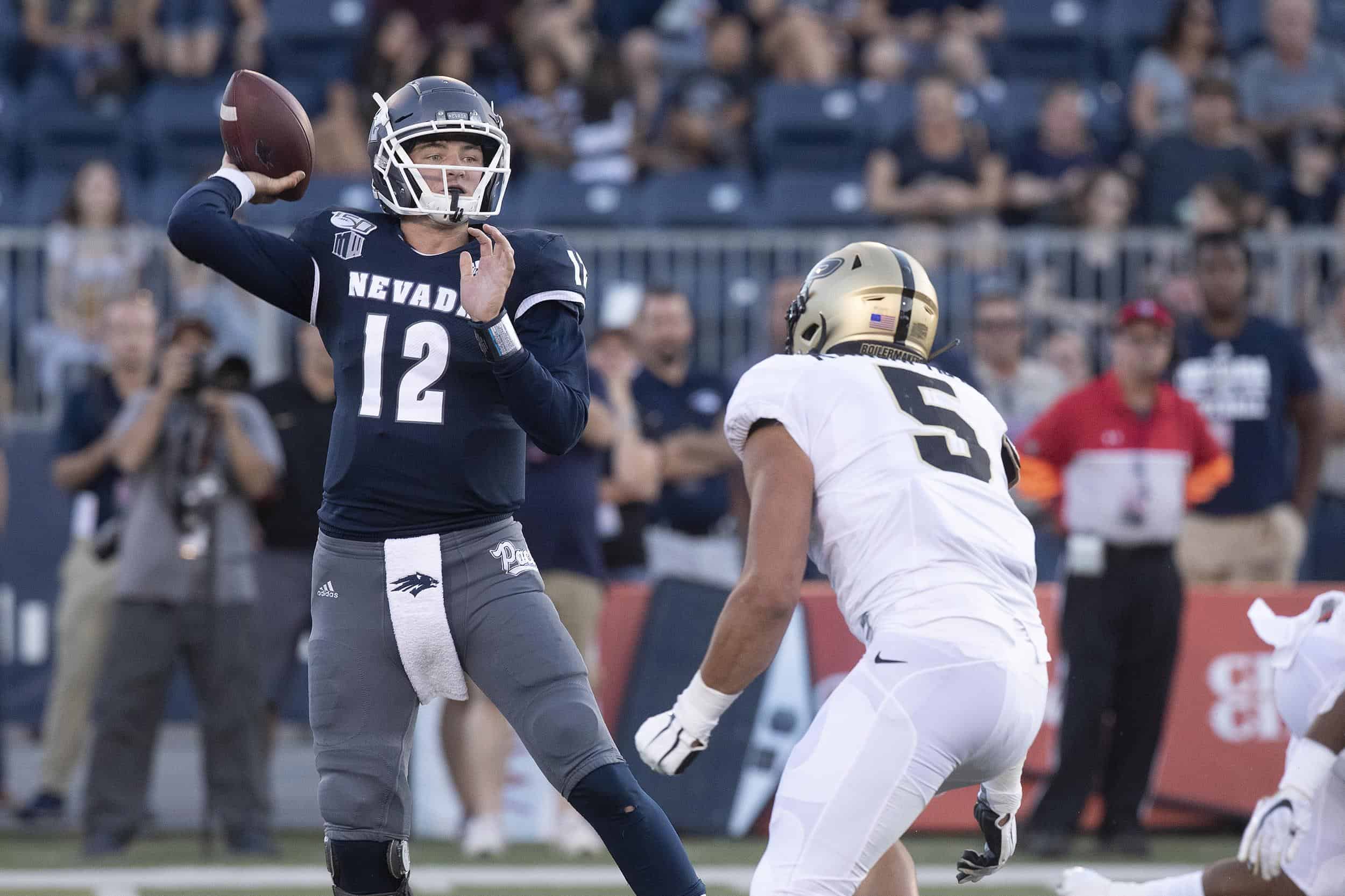 Week 8 of the college season welcomed the Big Ten and Mountain West to the party. Quarterback prospects from both of those conferences turned in splendid performances, as did several offensive linemen across the country, boosting their NFL draft stock in Week 8. Here are this week’s risers and sliders.

Over the summer, I made a prediction that Strong was likely to be the next Mountain West quarterback who’ll be selected in the first round. Strong made that case in the season opener against Wyoming in Week 8 with 39 completions on 52 attempts for 420 yards and four touchdowns during Nevada’s overtime victory, raising his NFL draft stock. The game ended up closer than it had to be, as Strong dominated the early part of the contest and manhandled Wyoming in every category.

The redshirt sophomore is a gunslinger who makes good decisions with the ball. Strong did a much better job of not locking onto receivers as the game progressed, and he’s shown a lot of progress since last season. He has incredible upside and the physical gifts to lead a franchise at the next level.

Buoyed by a few surprise wins, Tulsa is in the thick of the race for the AAC title. They have several under-the-radar NFL prospects, including center Gerard Wheeler. A player I graded as a third-round prospect off the 2019 film, Wheeler is looking even better this season as a junior. He was explosive and dominant during Tulsa’s victory over South Florida on Thursday, and he showed power at the line and agility in motion.

Wheeler could best be defined as a dancing bear, as he barely measures 6-foot-2 but tips the scales around 320 pounds. Underrated at this point in the process, Wheeler offers starting potential at the next level.

There were probably four different Buckeyes who boosted their NFL draft stock in Week 8 and could’ve made the risers list this week, but I’ll go with Josh Myers. He was terrific as both a run blocker and in pass protection, keeping Justin Fields upright and giving him time to improvise when receivers were covered. As I mentioned during the gameday blog, a number of scouts grade Myers as a top-60 pick who has starting potential for the next level.

The chatter on Ben Brown, who can play center or guard, is getting louder in the scouting community. The junior is a tough, slug-it-out lineman who gets the most from his ability and dominates opponents. He’s strong at the point, and though he’s not the niftiest looking athlete, he blocks effectively on the move. His blocking helped Mississippi rush for 283 yards against Auburn in a game they lost by seven points. I’m told there’s a very good chance the junior enters the 2021 NFL Draft.

The headline of this Week 8 game was the record-breaking performance of redshirt freshman quarterback Graham Mertz, but Jake Ferguson made the college debut of Mertz much easier by catching seven passes for 72 yards and three touchdowns. The junior is an athletic move tight end with the growth potential to develop into a traditional three-down player at the position. Coming off a disappointing 2019 campaign, Ferguson’s fast start this season is an encouraging sign as he looks to raise his NFL draft stock.

Mizzou pulled a slight upset over Kentucky and held the Wildcats to 145 yards of total offense and 10 points, a defensive charge that was led by Nick Bolton. Bolton led all Tigers defenders with seven tackles and added one tackle for loss, one sack, and a quarterback hurry. I gave Bolton a strong third-round grade entering the season, and I believe he could move higher up draft boards. He’s a smart, intense linebacker with great range and speed in lateral pursuit.

I graded John Raine as a PFA during my Northwestern preview over the summer, and I was surprised scouts did not grade him off the 2019 film when he totaled 38 receptions and six touchdowns. His stats in the first game of the season against Maryland included five receptions for 53 yards.

Raine is a serviceable prospect who could be used as a move tight end or H-back. While he won’t be selected in the draft, I fully expect him to compete next summer for a job as a third tight end.

South Dakota School of Mines is certainly not a bastion of NFL talent, and Batho won’t change that. But he will have scouts traveling to Rapid City to watch him play. Batho is a massive lineman who checks in at 6-foot-7.5 and 315 pounds, and he plays to that size and blocks with great technique.

Batho dominates defenders once he gets his hands on them, drives opponents off the line, and blocks down to smother them altogether. Batho is heavy-footed moving around the field and will have to move from his present left tackle spot to right tackle or possibly guard. He won’t get drafted, but Batho is a size prospect who should get practice-squad consideration in the NFL.

Brandon Peters was a player I graded as a sixth-round prospect entering the season, which was a full round higher than scouts. But he looked pedestrian during a season-opening loss to Wisconsin in Week 8, not helping his NFL draft stock.

Peters completed less than 50 percent of his throws for 87 yards and could not move the offense during the game. There’s plenty of season left for Peters, but he must quickly get his game into gear before he’s pulled from the starting lineup.