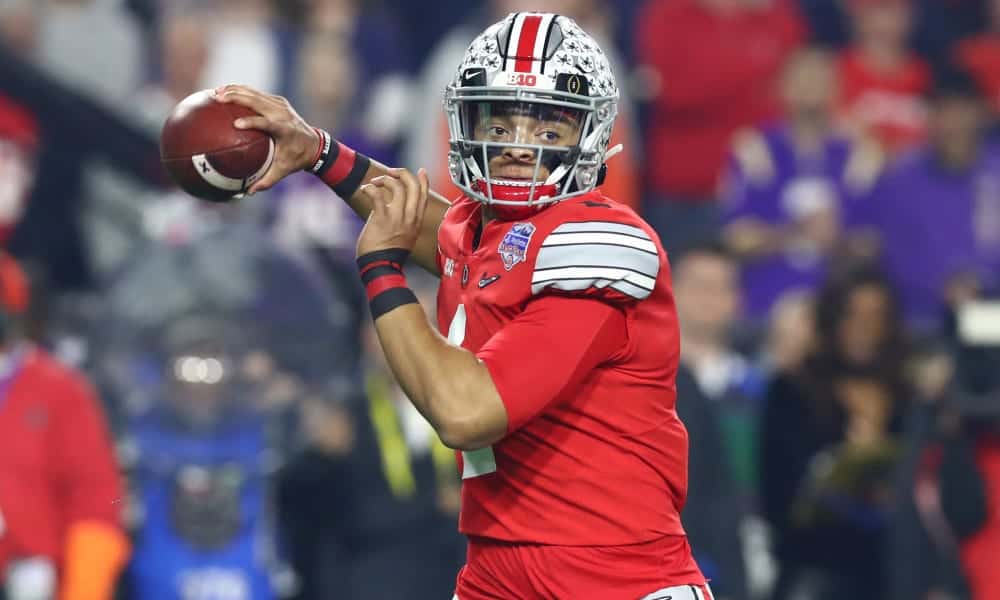 My early look at the potential prospects that may be available in the 2021 NFL Draft continues this week by doing a preview of our first “Power Five” conference. My 2020 Preseason Summer Scouting series kicked off already with early looks at the Mid-American Conference and American Athletic Conference. This week I take a closer look at the Big Ten Conference, the oldest Division I collegiate athletic conference in the nation.

The final installment covering the remainder of the Big Ten Conference has been published. To view my grades and projected draft rounds for Big Ten draft-eligible prospects, scroll to the end of the article.

A late-season surge and a bowl appearance helped head coach Lovie Smith maintain his job despite what seemed like an inevitable exit. Illinois did not have a player selected in this past April’s NFL Draft, but as many as three could be chosen in 2021.

Junior tight end Daniel Barker lands on top of my board, and he’s very much what teams are looking for at the position — an athletic pass catcher who looks like an oversized receiver. Barker’s ultimate draft position will be determined by his workouts and true 40-yard dash time.

I stamped left tackle Vederian Lowe as a draftable prospect last summer, and while I did not see a lot of progress in his game in 2019, he still gets a late-round grade. Lowe is a quick, agile blocker who controls opponents once engaged at the point. I’m not so sure he projects to left tackle at the next level, and he may in fact kick inside to guard, but Lowe has the skills to play on Sundays.

Quarterback Brandon Peters is a strong-armed passer with outstanding size. He showed terrific development throughout the 2019 season, made good decisions and threw accurate passes. Peters could definitely make a jump up draft boards with a good senior campaign.

The Hoosiers are becoming more and more competitive on the field, and I expect them to take the next step this season. They had just a single player selected this past April, but that number could be as many as a half-dozen in 2021, depending on which underclassmen enter the draft.

James Head Jr. is developing into a pass-rushing terror, as he’s an athletic defender who effectively comes out of a three-point stance and stands over tackle. Head bends the edge with speed and balance and makes a lot of plays in space. He has terrific upside and comes with growth potential.

Peyton Hendershot is a terrific pass-catching tight end who also gives a lot of effort as a blocker. He’s solid in all areas, but he lacks any great physical skill to his game. I think Hendershot is a step below former IU tight end Ian Thomas.

Indiana has a host of next-level linebackers, including a pair I grade as sixth-round prospects.

Cam Jones is explosive and athletic, and he makes plays sideline to sideline. He’s very effective in pursuit and shows skill in coverage. Marcelino Ball is another playmaker, but he lacks great next-level size and is more of a safety playing linebacker at the college level. While Ball is not a plug-and-play type of linebacker for the next level, Jones can line up in a variety of schemes.

Though he isn’t draft-eligible, keep an eye on Matt Bedford, a sensational left tackle who has first-round potential.

Reminder: To view my grades and projected draft rounds for Big Ten draft-eligible prospects, scroll to the end of the article.

The Hawkeyes had two players selected in the 2020 NFL Draft, both slightly lower than most initially expected. Tristan Wirfs was drafted in the middle of round 1, while A.J. Epenesa fell out of the first frame altogether. This year, it will be a purely offensive draft at the top for Iowa with several second-day selections.

Receivers Ihmir Smith-Marsette and Brandon Smith are highly thought of in the scouting community, and there’s little spread between the pair on my board.

Smith-Marsette is the speedier receiver with the ability to stretch the field, while Smith is the big-bodied wideout. I like Smith’s receiving skills better, though there is no denying that Smith-Marsette will have an easier time separating at the next level.

Alaric Jackson is all over the place on draft boards at the present time, but I believe he’s a legitimate second-day pick. He’s more of a natural pass protector than Tristan Wirfs, though Jackson is deficient as a run blocker.

Defensive end Chauncey Golston is explosive with nice length and growth potential. He works hard and makes plays on the ball, and Golston will only get better as he physically matures and gets stronger.

Like last year, the top players on my Maryland board are underclassmen, although this time they are blockers rather than skill players.

Jaelyn Duncan is a long, powerful college left tackle who I believe will ultimately land on the right side at the next level. He’s a terrific run blocker who anchors in pass protection, but he lacks fluid footwork and lateral blocking range.

Marcus Minor is a college right tackle who I believe will be a zone-blocking guard on Sundays. Minor blocks with solid fundamentals and moves relatively well, but he lacks tackle size.

Reminder: To view my grades and projected draft rounds for Big Ten draft-eligible prospects, scroll to the end of the article.

Is this the final dance for Jim Harbaugh at Michigan? Can he beat Ohio State or at least keep the game close? Harbaugh will have plenty of talent at his disposal in those attempts, as a half-dozen Wolverine prospects grade as top-100 selections on my board.

Michigan has consistently put talented offensive linemen into the draft, and Jalen Mayfield will be their next bigtime prospect. The third-year sophomore is large, athletic and versatile. He’s a terrific pass protector who is also effective as a run blocker and in motion. Mayfield also has the ability to play left or right tackle, in my opinion.

Kwity Paye bypassed the 2020 NFL Draft and has the potential to make a big move up draft boards for 2021. He’s an explosive, speedy pass rusher who is highly thought of in the scouting community. Paye needs to get stronger, but he has upside.

Ambry Thomas is a terrific cover corner with outstanding ball skills. He’s fast, feisty and instinctive and constantly makes positive plays. Thomas is thinly built and struggles in battles, but he should fill out his frame in time.

Nico Collins is another who bypassed April’s draft and is also highly thought of in the scouting community. He’s a tall, game-controlling receiver who not only wins on contested throws but also shows great awareness and concentration. I am concerned, however, about his limited quickness and speed and his ability to separate at the next level.

I graded Nick Eubanks as a potential second-day pick off the 2018 film, and he did nothing last year to diminish that standing. Eubanks looks and plays like a power forward on the football field. A big season could put him into the draft’s initial 45 selections.

Keep an eye on running back Chris Evans, who missed the 2019 season due to suspension. He looked like a legitimate second-day prospect off the 2018 film, something that is attainable for Evans next April if he plays well this season.