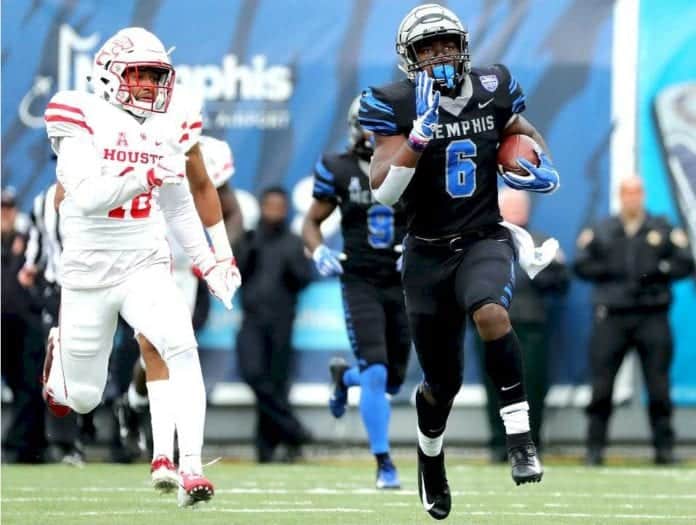 The first full weekend on the college football schedule offered few surprises though we did witness one terrific contest between Auburn and Oregon.  It was a week where a few next level prospects at the tight end position stood out, while another disappointed.

The first full weekend on the college football schedule offered few surprises, though we did witness one terrific contest between Auburn and Oregon.  It was a week where a few next-level NFL Draft prospects at the tight end position stood out, while another disappointed.

The weekend also saw some fine performances by several underrated defenders.  Here, to start the season, are the Risers & Sliders for Week One.

Taylor was an NFL Draft prospect I highlighted in the opening of Saturday’s CFB game day blog and the ball carrier did not disappoint.  He was impossible to stop and finished with 128 yards on 27 carries and 1 touchdown against a solid Mississippi defense. Taylor’s physical skills translate well to the next level. With the graduation of Darrell Henderson and Tony Pollard to the NFL, he now has a big opportunity to move up draft boards.

Herron was just one of many players from Saturday who turned in a terrific performance after missing most of 2018 with an injury.  The athletic tackle played well throughout Wake’s high scoring victory over Utah State. He’s a nimble, flexible blocker who plays with great knee bend and leverage, displaying terrific movement skills as well as the ability to knock speed rushers from their angle of attack.  While scouts grade Herron as an undrafted free agent, I think he’s worthy of middle-round consideration in the 2020 NFL Draft.

The Cougars were beaten up by in-state rival Utah, but Bushman impressed and proved he’s the next talented tight end from the BYU program.  Despite being on the losing side of the scoreboard, Bushman led all receivers with 6 receptions for 62 yards. Bushman is a consistent pass catcher who, despite not looking incredibly athletic, shows the ability to get down the field and win out for the reception.

Walker, an underrated linebacker I mentioned during the CFB game day blog on Saturday, is another who had a terrific game despite playing for the losing side. Walker led all defenders with 15 tackles during the Bulldogs loss to USC, while also recording 1 TFL and 1 PBU.  What made Walker’s performance so impressive was it came after a change of positions.

Last season, he was primarily used at the line of scrimmage as a 3-4 edge rusher and was rarely required to make plays in space. This year, Walker has moved to middle linebacker and is assuming more defensive responsibilities.  The results look good in the early going.

Over the summer I glowingly complimented Deguara, mentioning how underrated he was, and the senior responded with a terrific performance during the season’s first game. Finishing with 4 receptions for 53 yards and 1 TD in the win over UCLA, Deguara did the job as a pass catcher and blocker.  While he’ll have to turn in some pretty good draft workouts to be selected in the late rounds, I feel Deguara will compete for a third tight end spot on a roster in the NFL next year.

I mentioned Onu as a sleeper prospect during my Colorado write-up and the graduate transfer made an impact for his new team during the first game of the season. Onu finished with 4 tackles and 1 interception which came during a critical moment early in the game when Colorado State was marching into the end zone. He displayed excellent range, ball skills and instincts.  If he continues to play at this pace I expect to see Onu in a postseason game such as the Shrine Game or possibly the Senior Bowl.

I brought Taumpoepeau to the attention of those listening to our initial episode of The Draft Insiders podcast as I branded him a “small school gem” at tight end.  Against Arkansas, a team with a solid defense, Taumoepeau led all receivers with 4 receptions for 56 yards and 1 TD.  He’s an athletic tight end with nice size (6-feet-2.5-inches and 250 pounds), next-level speed (4.65 seconds in the forty) and a large upside. Expect Taumoepeau to show up in the postseason at either the Senior Bowl or Shrine Game.

During my USF write-up I mentioned that despite receiving some top 100 draft grades, I felt Wilcox was overrated. While he’s a solid tight end prospect, I feel Wilcox is nothing more than a third tight end at the next level and a late-round pick. He came away with just one reception against a very average Wisconsin defense and had an unfortunate drop during a critical moment when USF was trying to claw their way back into the game.

Sheppard is another who I branded overrated during my write up of Ole Miss. I don’t see the middle round draft grades scouts had given Sheppard, including some who stamped him as a third-round prospect. During the Rebels’ loss to Memphis on Saturday, Sheppard looked more like the undrafted free agent I graded him, finishing the contest with 1 assisted tackle and 1 QBH.