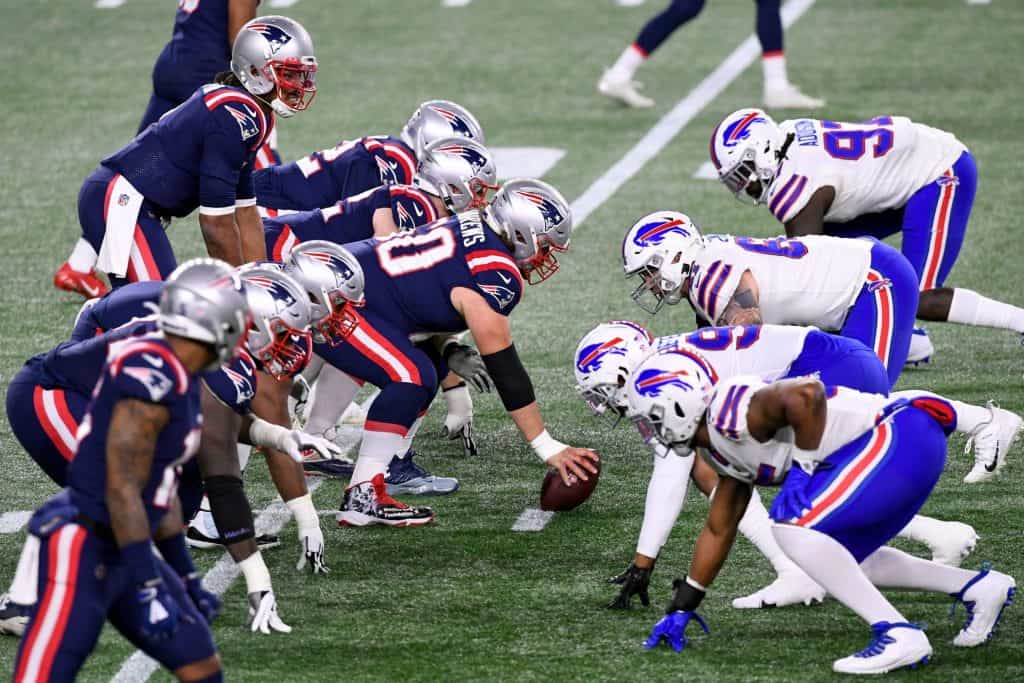 After an active 2021 NFL offseason, how does the New England Patriots’ depth chart look entering the offseason program? With several questions surrounding the shape of the offense, the next few months could be fascinating in New England.

The Patriots made sweeping changes to their roster this offseason, which has left their depth chart looking very different to the conclusion of the 2020 season.

There is plenty of intrigue around the Patriots’ offensive depth chart following the 2021 NFL Draft. With big moves in free agency and some blockbuster names in the draft, how will the offense look when the start of the season rolls around?

After spending the 2020 season in New England, Cam Newton returns to the Patriots atop the QB depth chart. Some may have been surprised by this move, considering that he didn’t particularly impress in 2020. He finished the season with a 65.8% completion percentage, 2,657 yards, 8 touchdowns, and 10 interceptions. He also added 12 touchdowns on the ground.

However, there was concern about his passing ability and arm strength, especially considering that he suffered multiple shoulder injuries in the last several years. According to NFL’s Next Gen Stats, Newton had an average of 7 Intended Air Yards in 15 games, the ninth-worst total in the league out of 41 eligible quarterbacks (minimum 128 pass attempts). Intended Air Yards is the average air yards a passer throws on all attempts — it’s a metric that shows how far the ball is being thrown downfield.

That being said, the Patriots’ wide receiver group was among the worst in the NFL — now they have upgraded it, Newton has stiff competition for his starting role from 15th overall selection Mac Jones. Jones posted impressive numbers in his final college season, with a 77.4 percent completion rate and 41 touchdowns. Viewed as one of the most pro-ready QB prospects this year, could Jones take the starting role from Newton this offseason?

The third QB on the New England squad is Jarrett Stidham. Stidham has struggled early in his career, and the selection of Jones realistically leaves him competing just to remain on the roster at this point.

Year after year, the Patriots’ running back depth chart leaves us scratching our heads looking for who will be the trusted back. The 2021 NFL season is set to be no different. The expectation is that Damien Harris and Sony Michel will battle it out for the top role. In 2021, Harris had 691 rushing yards on 137 attempts (5 yards per attempt). Meanwhile, Michel had over 900 rushing yards in each of his first two seasons, with injury curtailing his 2020 season. Harris could prove to be the “feature” back, while Michel and his 14 rushing touchdowns play a role on short-yardage and near the goal line.

However, neither of them is expected to be used heavily in the passing game. Michel has just 40 targets in his career, while Harris had just 7 targets last season. Harris is more likely to develop into a dual role, but the Patriots have other pass-catching backs on the roster who could stand in the way.

James White returns to the roster after testing the waters in free agency. He has 497 career targets, including more than 50 targets a season every year dating back to 2015. Fourth-round selection Rhamondre Stevenson could play a role at some point as well. Stevenson posted impressive numbers at Oklahoma on relatively limited touches. He also caught the ball effectively as a senior, meaning he could develop into an all-round back for New England.

J.J. Taylor should not be underestimated after a couple of reasonably impressive showings as a rookie. His role as a kick returner could potentially keep him on the roster over Brandon Bolden.

The Patriots kicked off free agency by signing former Philadelphia Eagles and Las Vegas Raiders wide receiver Nelson Agholor to a two-year contract worth $22 million with $16 million guaranteed. After an underwhelming four years with the Eagles, Agholor signed a prove-it deal with the Raiders in 2020. There, he formed great chemistry with quarterback Derek Carr and piled up 896 yards and 8 touchdowns. More impressive was his 18.7 average yards per reception.

Those were all career-high marks for Agholor — he had never topped more than 768 yards in Philadelphia, although he did have 8 touchdowns in 2017. His highest average yards per reception mark was 10.7 yards in 2018. If Newton (or whoever might be under center) can get the ball to Agholor in open space, he will likely be able to replicate his 2020 numbers at minimum.

Opposite Agholor will be Kendrick Bourne, whom the Patriots signed to a three-year contract worth $15 million with $5.25 million guaranteed. Bourne, who finds himself on the Patriots’ depth chart after four years with the San Francisco 49ers, had a career-high 667 yards in 2020. However, we shouldn’t expect him to light the world on fire after a pedestrian start to his NFL career.

Behind those two on the Patriots’ depth chart is Jakobi Meyers and N’Keal Harry. Meyers had a good rapport with Newton last season but has likely fallen down the pecking order. There has been ample talk that Harry is on his way out of New England. The Patriots may still feel they can make something of the former first-round selection, but he appears to be buried on the depth chart for now.

The addition of Tre Nixon in the seventh round is intriguing. The former UCF receiver averaged 15.3 yards per reception and scored 13 touchdowns in three seasons with the Knights. His most likely role is playing as a backup to Agholor if he makes the roster.

The other names on the depth chart currently include Gunner Olszewski and Matthew Slater. Both should continue to play big roles on special teams.

To say the Patriots upgraded the tight end position would be a massive understatement. Not only did they add Jonnu Smith from the Tennessee Titans on a four-year, $50 million contract, but they also signed Hunter Henry away from the Los Angeles Chargers to a three-year contract worth $37.5 million. Together, they’ll earn an average of $25 million per year.

Look for offensive coordinator Josh McDaniels to use both Henry and Smith to exploit mismatches in the opposing secondary. Whoever is under center in New England will benefit massively from having two explosive weapons at tight end.

The other names on the Patriots’ depth chart at the tight end position are both draft picks from last season in Dalton Keene and Devin Asiasi. Consequently, the arrivals of Smith and Henry likely indicate the Patriots have not been impressed by what they saw from those two as rookies.

The Patriots’ depth chart on the offensive line sees the return of C David Andrews and RT Trent Brown. With Shaq Mason projected to be at left guard and Michael Onwenu projected at right guard, it will be interesting to see if the Patriots follow that path when the season opens in September.

Some thought Andrews would depart in free agency. However, the Patriots were able to bring him back on a four-year contract worth $19 million ($6.5 million guaranteed). They did lose OG Joe Thuney to the Kansas City Chiefs, on the other hand.

The Patriots’ only major addition on the offensive line in the draft was Colorado’s William Sherman. Sherman is viewed as a likely guard prospect at the NFL level. However, he provides the Patriots with an option to serve as a backup at both tackle and guard. That is a precious skill set for New England.

The other backups on the Patriots’ offensive line depth chart include Justin Herron (OT), Korey Cunningham (OT), Yodny Cajuste (OT), Marcus Martin (OG), Ross Reynolds (OG), Najee Toran (OG), and Ted Karras (C). New England added Karras after spending the 2020 season in Miami and with the aforementioned uncertainty about Andrews. If either Mason or Onwenu struggles in training camp, Karras could be a candidate to replace one of them on the line.