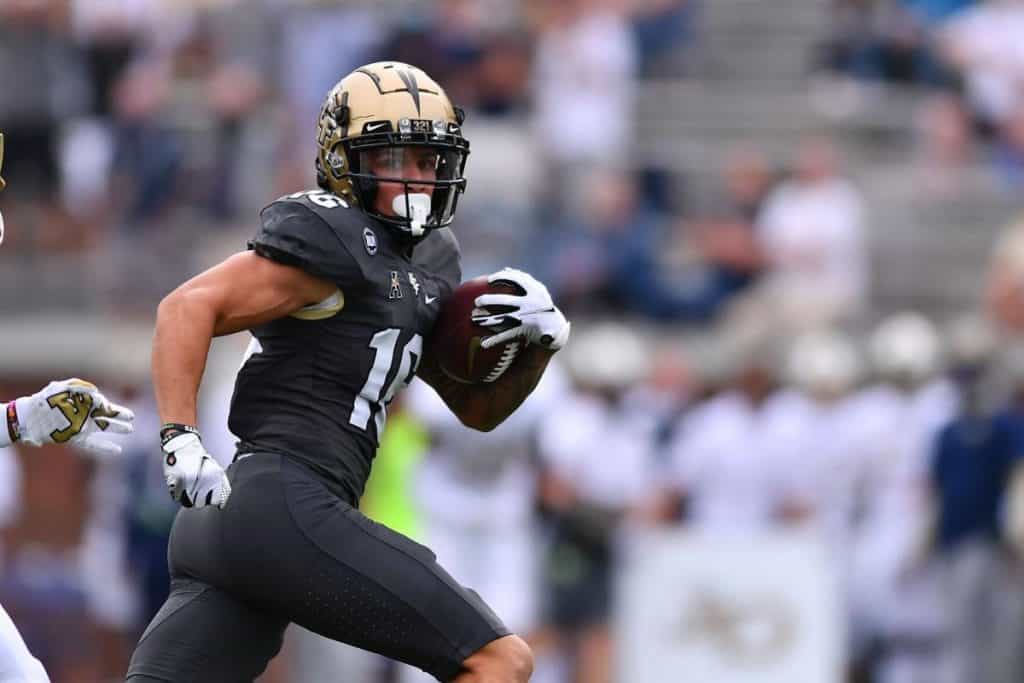 UCF wide receiver Tre Nixon declared for the 2021 NFL Draft after missing most of 2020 with a dislocated collarbone. Where does the speedy pass catcher fit in a deeply talented wide receiver class?

Positives: Three-year starter who struggled with a shoulder injury as a redshirt senior. Explosive receiver who plays faster than his 40-time and presents himself as a legitimate downfield threat. Very quick, comes back to the ball out of breaks, and immediately turns it upfield running after the catch. Displays terrific focus as well as concentration, extends his hands, and looks the pass into his hands.

Consistently comes away with the difficult catch. Sneaky fast, has opposing cornerbacks playing back on their heels, and makes the over-the-shoulder reception at full speed without breaking stride. Follows the quarterback across the field to make himself an available target and easily adjusts to the errant throw. Effective when he makes the reception away from his frame. Displays soft and strong hands. Plays smart, instinctive football.

Negatives: Occasionally lets the pass get inside him. Possesses better play speed than timed speed and lacks a true second gear. Coming off a shoulder injury.

Analysis: Nixon was a consistent threat for Central Florida as an underneath receiver who took it deep on occasion. Medical exams, as well as testing results, will dictate where he is eventually drafted, but Nixon possesses the ability to make a roster as a fourth receiver at the next level.

UCF wide receiver Tre Nixon heads to the 2021 NFL Draft after an eventful football journey. It began as a standout sophomore at Viera High School in Florida. Whereas a number of players don’t rise to prominence until their junior or even senior high school careers, Nixon was making waves early. He racked up 636 receiving yards on 30 catches while adding 6 touchdowns.

As a junior in 2014, he further demonstrated his ability as a big-play threat. From just 6 more catches he put together a 905-yard and 12-touchdown campaign. His junior year served as an appetizer for his senior season.

Nixon set a school receiving record with 1,243 yards and 18 touchdowns from 79 catches. Viera reached the Class 7A State Final as Nixon earned the award for the Florida Dairy Farmers Class 7A Player of the Year. Additionally, he earned USA Today First Team All-State honors.

College programs from across the nation were taking notice of the speedy pass catcher from Florida. In addition to in-state offers from Florida, FSU, FAU, USF, and eventual home UCF, he held 46 offers. Finally, the four-star recruit committed to Ole Miss describing the program as feeling “comfortable” and “like home.”

Ole Miss would be home for just two seasons. Arriving into a locker room that also contained A.J. Brown and D.K. Metcalf, Nixon would redshirt in 2016. Although he would make 10 appearances in 2017, he would have just one catch for 19 yards against California.

Following NCAA sanctions against Ole Miss, players were offered the opportunity to transfer out of the program. Although he never disclosed whether it was the results of the sanctions or just due to a lack of playing time, Nixon took the opportunity to leave. In early January 2018, he announced he was coming back to his home state with a transfer to UCF.

He made an immediate impact as a UCF wide receiver. In his debut against UConn, he had 101 receiving yards and 2 touchdowns, his first college scores. He’d go on to play every game, racking up 562 yards and 4 touchdowns.

After snagging touchdowns in the opening two games of the season, Tre Nixon had a career game against a Power 5 opponent. Although UCF would lose to Pittsburgh, he racked up 136 receiving yards at 19.4 yards per catch. It was the first of three 100+ yard games that season, finishing with 830 receiving yards and 7 touchdowns. Nixon showcased his big-play ability with 15 receptions of 20+ yards.

His performances put the college football world on notice. Heading into his redshirt-senior season, Nixon was on the Biletnikoff Award watchlist as one of the nation’s top receivers. The season got off to a good start with the UCF wide receiver notching up 94 yards and 2 touchdowns in the season opener against Georgia Tech.

During that game, however, disaster struck. Landing awkwardly from a catch, he dislocated his collarbone. He’d miss significant time, but showing determination immediately, he set a timeline for return.

That deadline was the matchup with Cincinnati, and sure enough, Nixon returned. Although there’d be no further college touchdowns, he added 166 yards in his final three games. Despite considering a return for 2021, UCF wide receiver Tre Nixon declared for the 2021 NFL Draft at the conclusion of the season.

UCF wide receiver Tre Nixon offers a true downfield threat in the 2021 NFL Draft. He can use his speed to get behind the secondary, but as Tony Pauline alludes to in his scouting reporting, can also be productive underneath.

He will be best suited to an NFL team that runs a vertical passing offense. Some teams that immediately stand out as good fits would be the Green Bay Packers, Kansas City Chiefs, and Detroit Lions. Additionally, the Buffalo Bills and Tampa Bay Buccaneers, are amongst the teams who threw the most downfield passes in 2020.