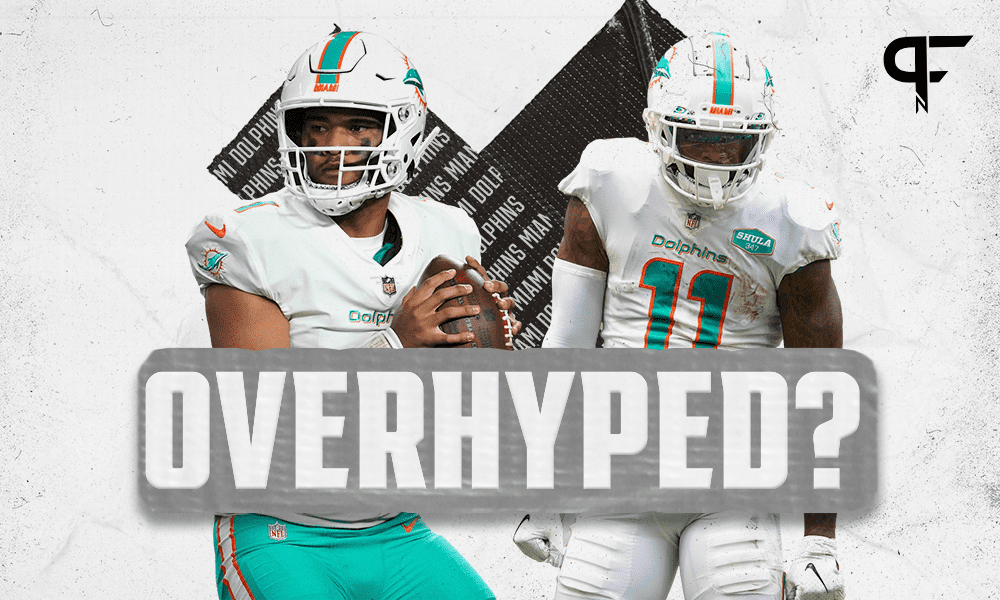 Can the Miami Dolphins receivers and Tua Tagovailoa live up to their potential in 2021?

By Dalton Miller
June 30, 2021
What's in this article? Click to show
How Tua Tagovailoa can turn the offense around in 2021
Can the Miami Dolphins’ receivers live up to their high draft capital?
Want more NFL news and analysis?

The Miami Dolphins quarterback and their top three receivers are all former first-round draft picks. With great draft capital comes great responsibility. That’s what Uncle Ben said to Peter, right? Nevertheless, having Jaylen Waddle, Will Fuller, and DeVante Parker on the same roster makes for some reasonably high expectations once Fuller returns from his supposed “oopsies” that led to a six-game suspension. The heat is already starting to form around Tua Tagovailoa after a sluggish start to his NFL career while Justin Herbert and Joe Burrow played well. Can he and the Dolphins’ receivers rise to the occasion?

How Tua Tagovailoa can turn the offense around in 2021

The most important thing here is that Tua stays healthy in 2021. Not “healthy enough to play” healthy, but truly back to 100% Alabama Tua. He appeared off in his time under center in 2020, and it wasn’t until popping on Gamepass that the realization hit. The lower-body mechanics are one thing, but his throwing mechanics were different.

Footwork at the NFL level is still important, but with pressures, different types of drops, and bootleg concepts, there are many different platforms in which a quarterback delivers the football. What stood out to me most is how early Tua was rotating his midsection and lead shoulder compared to his arm extension and release point.

The Horseshoe Huddle’s Zach Hicks is currently going through several articles surrounding Carson Wentz and his recent mechanical struggles. However, even though the series is not about Tua, there isn’t a better conglomeration of quarterback mechanic tidbits around, to my knowledge.

Tua injured his right hip, which could explain why he looked the way he did in 2020 mechanically. It appears as if he was really bringing through his plant leg on the follow-through to take pressure off his lead/right hip. Nevertheless, there were also times his mechanics looked fine, and those are the few throws I felt he was able to put some mustard on.

It’s unclear whether these things will change. Still, it’s far too early to write the script for his career.

What being healthy brings Tua Tagovailoa

I am not a doctor, quarterback coach, nor am I Tua’s mother. Something just felt wrong about him playing in 2020 at all. It felt like the team was still toward the ending stages of the rebuild, and Tua’s injury seemed severe enough to redshirt him in Year 1.

Hopefully, as Tua becomes more comfortable in the NFL and with his own body, he can get back to the pinpoint accurate passer he was in the short-to-intermediate areas of the field.

Can the Miami Dolphins’ receivers live up to their high draft capital?

The Dolphins’ lead receivers were the sixth, 14th, and 21st overall picks in their respective NFL Draft classes. Each receiver possesses their own particular skill set. But which receiver best compliments Tua’s skill set, and how can they all work together to bring this offense to the next level?

DeVante Parker is already a big-play target with a big, strong frame to haul in 50/50 passes. Coincidentally, his 58.3% catch rate is consistent with that of a player who often receives downfield and contested targets. He had a career year in 2019 with Ryan Fitzpatrick and Josh Rosen taking snaps for the Dolphins, but he’s never remained fully healthy throughout his time in Miami.

Parker would probably be best utilized in a traditional X receiver role, where he can attack the vertical plane and the deep intermediate areas horizontally between the 20s. Luckily, the additions of Waddle and Fuller should allow for him to fit that more niche role.

Parker is not an advanced route runner. He can win quickly on slants and other quick-breaking routes when he stems hard vertically, but he doesn’t consistently leverage defenders to attack blind spots and cross their faces. His upright running style also doesn’t create advantageous situations to break horizontally.

Of the Dolphins’ three leading receivers, I think Parker is the worst fit of the bunch for Tua. However, if he’s used in a lower volume, higher aDOT role, he could be a valuable asset for a quarterback getting his groove back (hopefully) with the deep ball.

We seem to discount how good Fuller is due to his propensity for injury. Last season — before his PED suspension — Fuller was on pace for 1,280 yards. That alone is impressive, but what he did that is even more impressive was his 70% catch rate at a 12.5 aDOT. Yet, that does not mean he is simply a downfield threat.

Fuller works at all three levels of the field with great separation quickness and long speed. His footwork is superb, and he’s shown he can work his stem to step on the toes of defenders and get them turned around.

Fuller is also one of the better post-catch playmakers in the league. He possesses the speed to split defenders and has enough creativity to make a defender or two miss in the open field. He doesn’t possess a massive catch radius, but he’ll elevate and finish here and there as well.

Fuller is a good fit for Tua. If you squint, you can see a hybrid of Jerry Jeudy and Henry Ruggs in Fuller.

Jaylen Waddle is a freak. This young man has incredible game speed. Waddle can also stop on a dime with that speed. People undersold him as a route runner coming out of Alabama. Presumably, that’s because he didn’t play a massive role in the Crimson Tide offense in 2019, and he broke his ankle in Week 5 of his final season.

Waddle has improved considerably as a route runner since they last played together. In fact, he was actually on pace to outdo teammate and Heisman Trophy winner DeVonta Smith through their first four full games. Before the 2020 season, Waddle played at one speed too often. In 2020, however, we saw him turn into a complete receiver and not simply an offensive weapon intermittently used.

Having already played together, Waddle is obviously a great fit for Tua. He fits his style well and should eventually have plays drawn up to get him easy completions.

Soon, Waddle will be in the same type of discussion as Tyreek Hill.