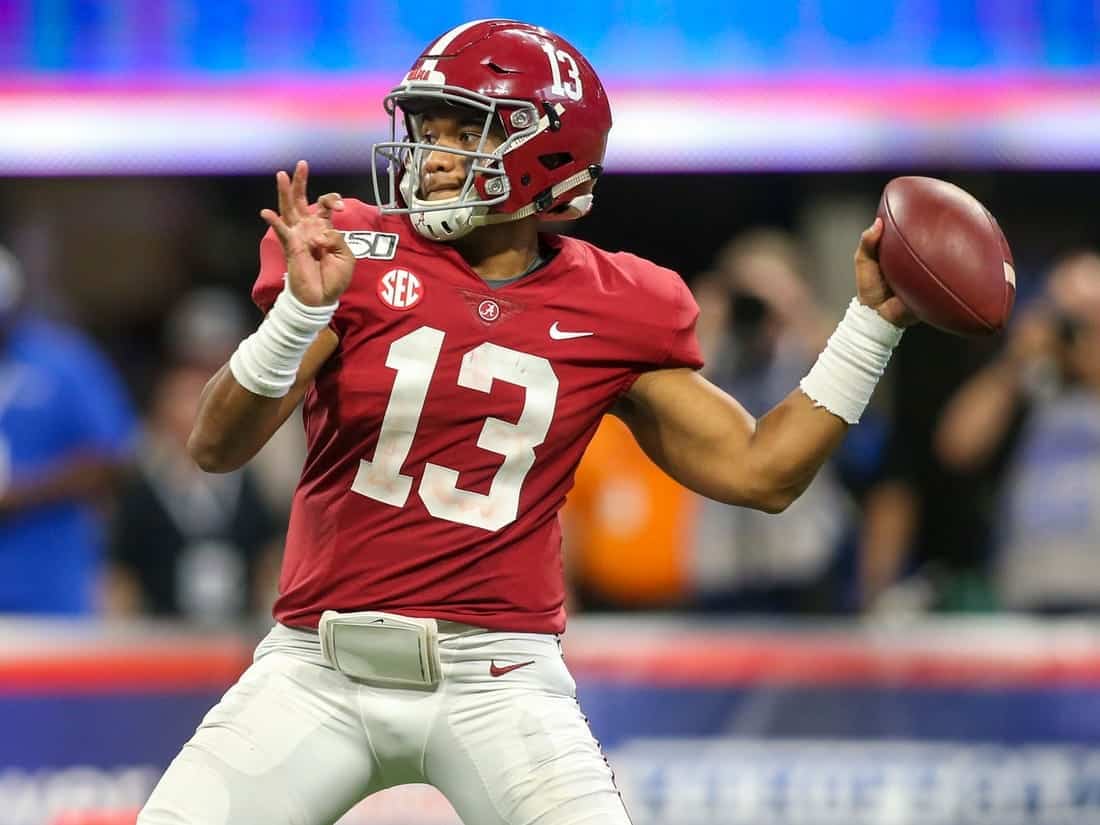 Brett Davis-USA TODAY Sports
What's in this article? Click to show
Dolphins management considers their QB situation as ideal
When will Tagovailoa be named the Dolphins starting quarterback?
Tua vs. Burrow – a dream rookie matchup?

The Miami Dolphins are still considered to be rolling out their rebuild plan which has been going on for the past few years, and one that awarded them a treasure trove of draft picks in the 2020 and 2021 NFL Drafts. In 2020, the Dolphins landed their franchise quarterback of the future in Alabama’s Tua Tagovailoa, which immediately sparked a debate on when the Dolphins would allow Tagovailoa to take the field.

According to a source with knowledge of the team’s thinking, the Dolphins could allow Tagovailoa to take the reigns from starter Ryan Fitzpatrick sometime in December. Further, numerous sources have told Pro Football Network that Tua is much healthier than people realize and that he is quite ahead of schedule in his rehab process.

The Dolphins are seemingly comfortable allowing Fitzpatrick to guide the Dolphins in 2020, and they plan to be more competitive in the AFC East division as well. However, barring a rapid ascension to the top of the division, conference, a remarkable turnaround, or injury to Fitzpatrick, the Dolphins will explore handing the keys over to Tagovailoa in the month of December.

There is no denying Tagovailoa’s talent when healthy. And when he did initially enter the 2020 NFL draft, the buzz, and debate, was at a fever pitch. Depending on the mock drafts you read, the numerous blogs from fan bases, or experts you tuned in on, there were differing opinions on the risks associated with drafting Tagovailoa, due to his health.

But rarely was his talent in question. Many could argue that, Tagovailoa’s injuries aside, that he would have gone number one over Joe Burrow, who was selected by the Cincinnati Bengals.

Miami is satisfied with Fitzpatrick serving as a mentor, and bridge, for Tagovailoa, and consider the current situation as “ideal.”

When will Tagovailoa be named the Dolphins starting quarterback?

The plan that Dolphins have in place for Tagovailoa seems to be nothing Earth-shattering, as even some predict Tagovailoa’s late-season debut. CBS Sports’ Jason La Canfora has stated his belief that the Dolphins could trot Tagovailoa on the field for a Week 13 matchup against Burrow and the Bengals.

“There was already no real rush to hand the team over to Tua even before the pandemic,” La Canfora said. “Coming off hip surgery, and with the dependable Ryan Fitzpatrick in the fold, Chan Gailey can take his time folding Tua into the offense. That transition was always more likely to come much closer to the end of the season than the beginning. And this is a team on the rise that will be able to be competitive with most teams with Fitzpatrick doing his thing…”

La Canfora continued, “But Fitzy will start to run out of gas eventually, and even with an expanded playoff field, Miami isn’t ready to take that step just yet. That Week 11 bye is the perfect time to be ramping up Tua and with the Bengals set to come to Miami in Week 13, well, that’s a date I might circle with a Sharpie.

“That begins a stretch of three straight home games to let the fan base start to see their future in action before the Dolphins close with consecutive road contests.”

This could be the date to earmark as a potential Tua debut. The NFL, Bengals, and Dolphins could all benefit from this, as it gives the league a marquee matchup to feature, and gives both the Bengals and Dolphins a chance to show the world a glimpse into their future.

After some futility from both teams, even more from the Bengals, a glimpse into a promising future would be a welcome event for fans for both teams.

The NFL will surely love to see the first chapter in the Tua vs. Burrow saga, especially as the regular season will be far different from any other season in league history.

By all accounts, the Dolphins will be playing things safe with Tua, but fans should keep an eye on December 2020 if they want to see the next franchise quarterback take the field for Miami.