My article about DeVante Parker's poor OSM performance in 2019 drew an number of questions from readers. This week, I answer some of them.

By Lucas Ellinas
July 2, 2020
Jump around this article Click to show
Parker’s OSM grade did not improve during the second half of 2019
The poor play of the Dolphins offense overall is not an excuse for Parker’s inconsistencies

Last week, I wrote an article about how DeVante Parker’s 2019 Offensive Share Metric (OSM) grade indicated that his play that season wasn’t as impressive as it might have appeared on the surface. Parker performed very poorly on that metric, receiving an overall grade of 28.03, 84th in the NFL among qualifying wide receivers.

That piece drew a number of comments from readers, so I thought it would be interesting to provide answers to some of the questions that were presented. If you haven’t read that article yet, I would strongly advise you to do so. Otherwise, this one won’t make much sense.

Read: DeVante Parker’s 2019 success with the Dolphins was not what it seemed

One point that was brought up was that, although Parker was nearly invisible early in 2019, he appeared to improve as the season went on. And in terms of his counting statistics, this was certainly true. Across the Dolphins first eight games, Parker totaled 400 yards and four touchdowns. In the second eight, both of those numbers increased, with Parker reaching 802 yards and five touchdowns. However, an increase in counting statistics doesn’t necessarily indicate an increase in how efficient a player was.

In order to demonstrate this fact, let’s once again look at Parker’s week to week OSM grades in 2019. The chart is below if you need to refresh your memory. The black dots represent Parker’s OSM grades, and the yellow line represents the league average for wide receivers. 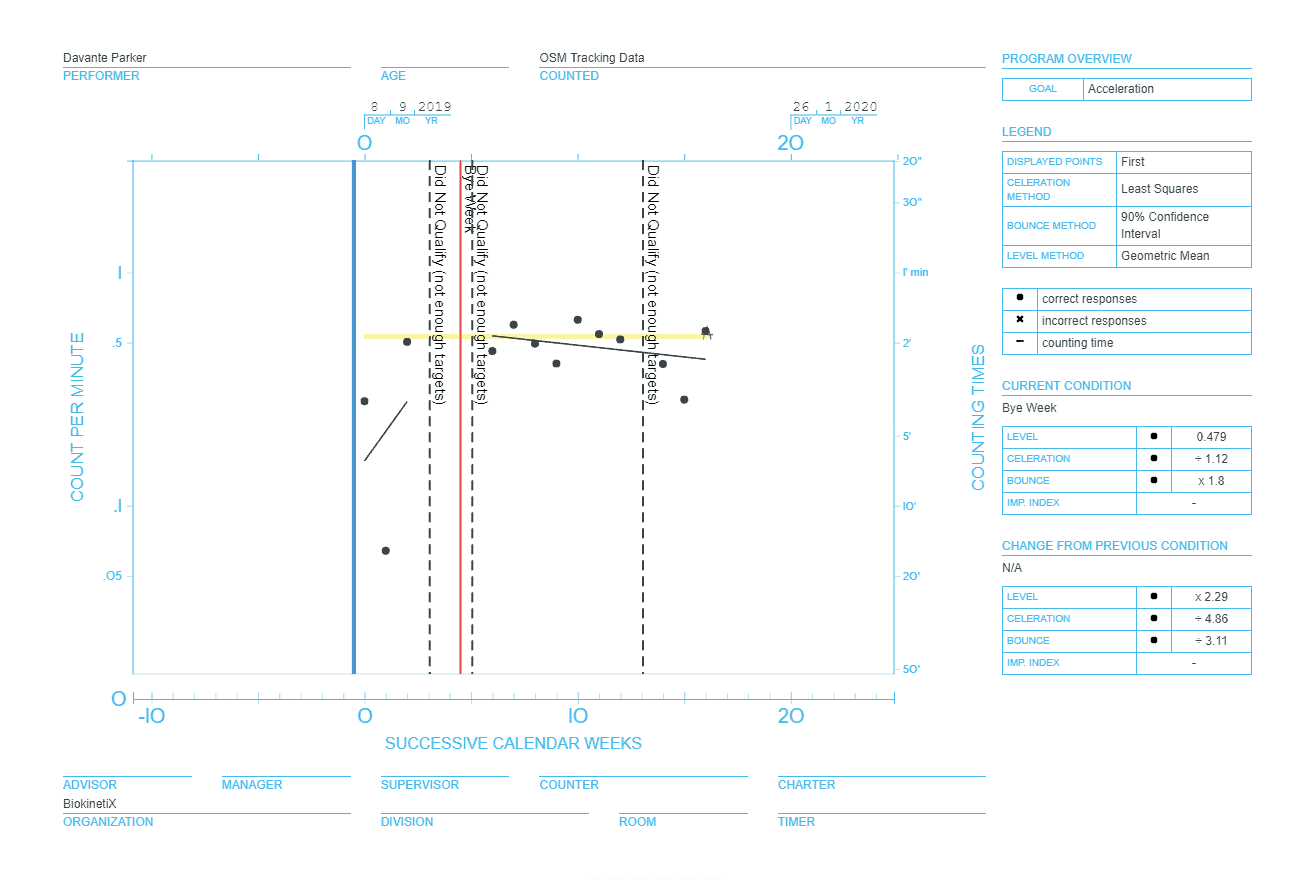 Across the first eight games of the season, Parker had a grade of 24.02. That is significantly lower than his overall grade, so statistically, you would expect him to improve during the second half of the season. And on the surface, that assumption appears to be correct, as during the eight remaining games he had a grade of 28.67.

However, those statistics are slightly misleading. As you can see by looking at the chart, Parker’s first-half average was weighed down significantly by an abysmal grade of 3.85 in Week 2. Take that out, and his average from that period rises to 28.06, much closer to his overall grade.

So, while Parker’s counting statistics might have increased, his OSM grade basically remained the same throughout 2019. That might seem counterintuitive, but the explanation is rather simple – as the season progressed, Parker became a larger part of the offense.

In the first half of the year, he was targeted 52 times for 28 receptions. During the back half, his targets increased to 76, and his receptions saw a similar jump to 44. So, even though Parker only caught the ball at a rate of slightly more than 50% throughout the entire season, he got more opportunities later on, naturally increasing his statistics.

The other question that was brought up concerned the play of Parker’s teammates. It is undeniably true that Miami’s offense was underwhelming last season, particularly on the offensive line, and Parker arguably needed to do more in order to compensate. Some fans seemed inclined to excuse his inconsistent play because of the failings of the offense around him.

However, there are two counterpoints that I will make here. First, that some of Parker’s teammates managed high OSM grades despite the lack of overall talent on the offense. I’ve already written about Albert Wilson, whose OSM grade of 37.36 ranked eighth among qualifying wide receivers.

Ryan Fitzpatrick also graded very highly; his grade of 27.75 ranked seventh at his position. And they both accomplished these impressive rankings within the same offense that Parker did, although they fulfilled different roles.

Parker could have been more efficient as WR1

My other response is that, while Parker couldn’t change how well his teammates played, he could have done a better job at fulfilling his own role within that context. His purpose was to be the primary target for the Dolphins offense, and while he did produce statistically, he undeniably could have been more efficient while doing so. For example, he could have gotten open more often or caught the ball more consistently.

Once again, I can’t help but compare him to Michael Thomas. Despite basically being the New Orleans Saints’ only viable target at wide receiver, he still managed to be staggeringly efficient in 2019, receiving an OSM grade of 41.34, eclipsing Parker by an enormous margin.

Now, I believe that Michael Thomas is the NFL’s best wide receiver, so it isn’t entirely fair to expect Parker to play to his standard. And the differences between the two player’s situations are too numerous to mention here. However, Thomas does show that a player can be incredibly efficient and consistent even while being their offense’s primary receiving option.

I’m not suggesting that this is easy to do, but the best players in the NFL are capable of doing it. If Parker wants to be considered among their number, he needs to improve significantly going forward.

2019 was Parker’s best season, but he can still do better

Regardless of my many criticisms of his play, last season was clearly a step in the right direction for Parker. He stayed healthy for the first time in his career, and was able to produce statistically as a result. There were undoubtedly games in 2019 that Miami could not have won without him. But he was just as undeniably not a very consistent player. You simply can’t reliably provide value to your offense when your targets are only successful 50% of the time.

That’s not to say that Parker can’t improve in the future. As I mentioned in the previous article regarding Parker’s 2019 OSM metrics, a new offensive system, and a new quarterback could put him in different situations and perhaps situate him better to take advantage of them.

As it stands now, however, he doesn’t provide the same kind of consistent value as the NFL’s elite wide receivers. If he continues to grow as a player in future seasons, maybe he can reach that level, but last season he fell far short of that standard.