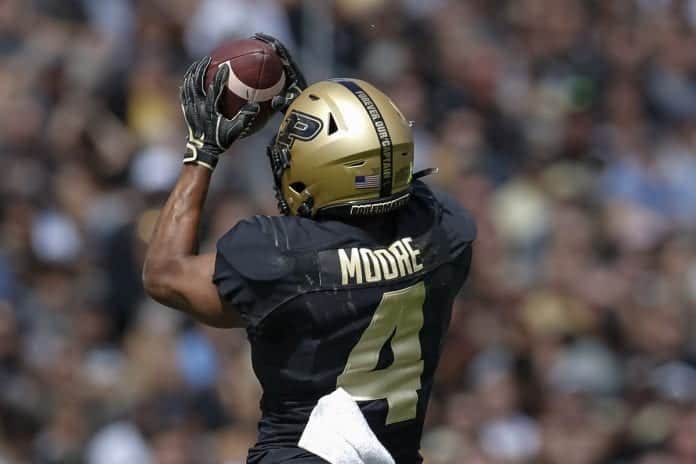 In the latest 3-round 2021 NFL Mock Draft from PFN Analyst Ian Cummings, the Miami Dolphins add an offensive weapon early before going in on defense.

The Miami Dolphins will enter the 2021 NFL Draft cycle with their eyes on providing weapons for new franchise quarterback Tua Tagovailoa while also bolstering their defense. With five picks in the first three rounds of the draft, the Dolphins will once again have the ability to move up and down the board as they see fit. In this 2021 3-round NFL Mock Draft from PFN Draft Analyst Ian Cummings, the Dolphins add an offensive weapon early, then continue to strengthen the defensive side of the ball.

There are quite a few 2021 mock drafts circulating around the internet and many of them have the Dolphins selecting a wide receiver with their first overall selection. This one is no different.

In this mock, because the order was determined using Vegas odds, the Dolphins selected WR Rondale Moore from Purdue with the fifth overall pick. This one, on the surface, might be a bit surprising because there are many who believe that LSU Tigers WR Ja’Marr Chase is WR1 headed into the start of the college football season.

But Moore is an interesting prospect – he is versatile, which we know this Dolphins coaching staff loves. He can line up anywhere on the field, which makes him a lethal weapon. With his speed, athleticism, and route-running skills, Moore is going to make a lot of general managers think hard in the 2021 draft cycle.

That said, Moore will have to continue the momentum he has built up and have a big year for Purdue if he wants to unseat Chase as WR1 in the 2021 NFL Draft.

The Dolphins selected Noah Igbinoghene with the 30th overall pick in the 2020 NFL Draft and now, in this mock draft, Cummings has the Dolphins bolstering their already formidable secondary with the selection of safety Hamsah Nasirildeen from Florida State.

Like other players the Dolphins have brought in the past year, Nasirildeen possesses great versatility with the ability to play up top and also come down in the box as a linebacker. In fact, since he arrived at FSU, Chris Hummer at 247Sports notes that he has played 631 snaps at free safety, 316 at strong safety, 307 at slot cornerback, and 242 at the inside linebacker position.

GMs across the league will have their eyes on Nasirildeen this season to see how he recovers from his torn ACL he suffered in November 2019. Some thought he would declare for the 2020 NFL Draft, but this injury obviously changed plans.

Although I think this might be a bit of a reach here this early in the first round, it’s not out of the question. A projected second-day pick had he entered this year’s draft, Nasirildeen will have the opportunity to show everyone that he is fully recovered and healthy.

This one might cause some people to scratch their heads. Two safeties in consecutive picks? Yes. But, let’s dive a little deeper into this selection.

Stevens is what many refer to as the quarterback of the LSU Tigers defense. Like Nasirildeen, Stevens is versatile and can play anywhere on the field. In the article ranking the top 10 safeties in the 2021 NFL Draft, PFN Draft Analyst Matt Valdovinos says that Stevens projects best as a prototypical box safety. Further, he notes that Stevens could be that missing piece that can effectively cover tight ends.

If these selections were to happen in 2021, the Dolphins could get their chess piece in Nasirildeen and then solidify the backend of their secondary with Stevens.

This would be a steal for the Dolphins if they were able to land Xavier Thomas with the 46th overall pick. That’s because there are some who believe that Thomas could be selected in the first round of the 2021 NFL Draft.

But it’s also important to note that Cummings mocks Thomas at 46th overall for a reason. Thomas can be inconsistent at times and actually showed a bit of regression this past season. In 2018, he was considered one of the top players in his class, and many started projecting him as a 2021 first-round talent. But then in 2019, that changed, and his projected draft slot started to move down a bit.

That said, the tools are there for Thomas to catapult himself back into the conversation as a top defender. He has a nice explosion off the line and the strength to push back offensive linemen into the pocket. Many will remember his 2019 game against Syracuse, where he racked up double-digit pressures on just 21 snaps. He also earned his first sack of the season in that game. It must be a Syracuse thing. Remember this sack from 2018?

There will be no excuses this year for Thomas – he’ll be in the spotlight as a starting defensive lineman and it will be his chance to show just how valuable he can be for an NFL defense.

With the 69th overall pick in this 2021 3-round NFL Mock Draft, the Dolphins select OT Landon Young from Kentucky. Nice.

After having a solid 2017 season but then missing all of 2018 with a left knee injury, Young had a nice bounceback season in 2019 and started in all 13 games. At 6-feet and 7-inches tall, he has great length for his position and knows how to effectively leverage his size against opposing defenders.

Young is a guy who can work his way up draft boards if he has another solid season for the Wildcats. If he is able to continue with his consistent play, I don’t think Young will make it to the third round in the 2021 NFL Draft.