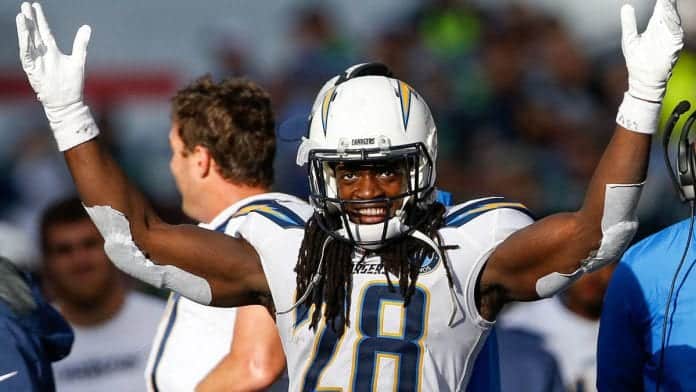 Melvin Gordon is a target for the Miami Dolphins, but will they pay him?

With the NFL free agency period about to begin, PFN Insider Ben Allbright reports that the Miami Dolphins are going to target RB Melvin Gordon.

With the 2020 NFL free agency legal tampering period scheduled to open on Monday, we’re already hearing whispers and rumblings regarding numerous teams and their plans. One such team is the Miami Dolphins, and Pro Football Network’s NFL Insider Ben Allbright is reporting that soon-to-be-former Los Angeles Chargers RB Melvin Gordon will be a target for Miami.

But there might be a question as to whether the Dolphins will meet his salary request because Allbright reports that Gordon is looking for a deal that will pay him in the double digits annually. This would be a big jump from last season where Gordon made $5.6 million in the last year of his rookie deal.

We reported on Broncos Country Tonight on Feb 07 that Melvin Gordon would be a target for the Dolphins, despite reports linking him to the Broncos.

The end of a rocky season in Los Angeles

Leading up to the start of the 2019 season, Gordon and the Chargers’ organization were locked in a contractual stalemate that resulted in the running back holding out the first three weeks of the year. Upon his return, he put up strong numbers, producing eight rushing touchdowns and adding another through the air.

However, he was largely outdone by the other member of the Chargers’ backfield, Austin Ekeler. Ekeler stole the show in L.A. throughout the 2019 season, finishing the year with 93 receptions for 993 yards and 557 yards on the ground.

Featured: Pauline Mailbag: Draft prospects, free agency plans, and what the Giants might do in the 2020 NFL Draft

With Ekeler taking over the starting job during Gordon’s absence, it was no surprise when the team decided to recently sign him to a four-year extension worth $24.5 million. Of course, this confirmed the writing on the wall that Gordon and his time with the Chargers was basically over. Now, he’ll test the free agency market while Ekeler settles into the RB1 role in Los Angeles.

Does Gordon fit in with the Dolphins?

You don’t need to take a deep dive into Miami’s roster to know that they need to address their running back situation in free agency, the 2020 NFL Draft, or both. After trading Kenyan Drake to the Arizona Cardinals last season, the 37-year-old QB Ryan Fitzpatrick was the Dolphins’ leading rusher with 243 yards.

The Dolphins, who are currently in the middle of a substantial rebuild, have Kalen Ballage, Myles Gaskin, and Patrick Laird on the roster at the moment. None of those names inspire much confidence when it comes to the team’s ground game.

But the good news is that Miami has over $90 million in cap space and a league-high 14 picks in the upcoming NFL Draft. This gives them a number of avenues they could take to bolster their rushing attack and signing Gordon could be an immediate answer to their backfield woes.

In five seasons with the Chargers, Gordon rushed for 4,240 yards and 36 touchdowns. He is also a weapon in the passing game, having caught 224 passes for 1,873 yards and 11 touchdowns. And although controversy followed him for part of 2019, he is still arguably going to be the best available running back on the market.

With Miami having so many holes to fill on their roster, Gordon’s price tag could be the only thing that might hamper a potential deal. But if they decide to meet his asking price, the potential to pair him with a rookie running back such as D’Andre Swift, Jonathan Taylor, or J.K. Dobbins could reinvigorate Miami’s non-existent ground game.