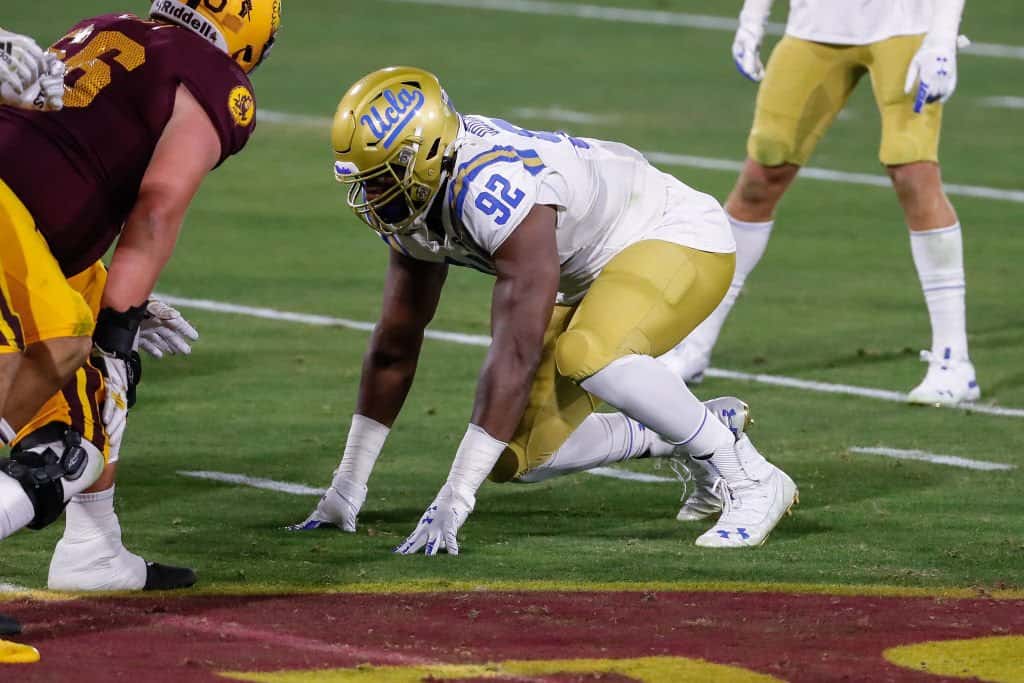 Positives: Three-year starter who also saw significant action as a reserve during his freshman season. Explosive, hard-charging defensive lineman who makes plays in every area of the field. Fires off the snap with an incredible first step, is rarely off his feet, and plays with tremendous pad level. Intense, effectively uses his hands and knocks back blockers with great punch.

Explodes through the gaps upfield, quickly changes direction or alters his angle of attack, and possesses a closing burst. Stays with assignments and does more than pin back his ears and rush up the field. Plays with a nasty attitude and always looks to make plays.

Negatives: Lacks bulk and gets controlled at the point of attack by a single blocker. May not have much growth potential.

Analysis: Odighizuwa was an explosive defensive lineman for the Bruins, but may not have a true position at the next level. He could project as a three-technique tackle or defensive end in a four-man front, although he’ll have to improve his strength at the point to develop into a starter on Sundays.

Osa Odighizuwa’s upside was apparent early. His older brother was a third-round pick for the New York Giants in 2015, and Osa shared his potential. Not only was the younger Odighizuwa a three-time state champion in wrestling, but he also had some of the best athletic numbers in the 2016 recruiting class. Odighizuwa had one of the fastest 40-yard dash times among defensive linemen. He also had the best vertical jump at his position.

That’s why it was somewhat surprising to see Odighizuwa listed as a mere three-star prospect. His size likely played a role. Standing at 6-foot-2, 257 pounds, Odighizuwa was noticeably undersized for an aspiring D-I defensive lineman. Still, Odighizuwa managed to get an offer to play at the Pac-12 level from the UCLA Bruins, the same school at which his older brother had played. The defensive tackle accepted, and started his career at UCLA.

Odighizuwa’s chance would come. But first, the UCLA defensive tackle needed to add weight and prepare himself for the collegiate level. Odighizuwa redshirted his first season with the Bruins, taking the opportunity to build his frame. In 2017, he reached the field as a reserve defensive lineman and flashed. Playing in all 13 games, he logged 15 total tackles, 5.5 tackles for loss, one sack, one forced fumble, and a fumble recovery for a touchdown.

Odighizuwa’s early success earned him an increased role in 2018. He started eight of 11 possible games that year. In the process, the UCLA defensive tackle registered 29 total tackles, 6.0 tackles for loss, 3.0 sacks, 2 deflections, and a forced fumble. In 2019, Odighizuwa became a full-time starter, and he reaped the benefits of his opportunity. Over 12 games, he proved to be a stalwart on the defensive line, amassing 46 tackles, 10.0 tackles for loss, 3.5 sacks, and a deflection.

Odighizuwa’s performance in the 2020 season

Initially, there was uncertainty surrounding the 2020 Pac-12 season. However, Osa Odighizuwa ended up playing anyway, and he benefitted as a result. The UCLA defensive tackle earned a career-high in sacks with 4.0. He also put up 30 tackles, 6.0 tackles for loss, and a deflection, all in just seven games.

For his production, Odighizuwa earned first-team All-Pac-12 honors for the first time in his career. He also earned an invite to the Reese’s Senior Bowl in January of 2021. There, he was able to keep following the path of his brother, one that should lead to the NFL.

The physical tools are exciting with Osa Odighizuwa. Although he’s only around 6-foot-2, 282 pounds, he’s incredibly dense, and he’s also a near-elite athlete for a defensive lineman. Odighizuwa made the 2020 Feldman’s Freaks list, on which he was documented to have the following skills: “Squatted more than 700 pounds, benches more than 420, has a 32-inch vertical, 15-percent body fat and has eclipsed 20 mph on his GPS.”

Odighizuwa is an athletic nightmare for some interior linemen, and his numbers check out on tape. The UCLA defensive tackle has excellent explosiveness off the line. He can also carry that through gaps in the line as he rushes. Additionally, Odighizuwa has the lateral athleticism to shift around when taking on blockers. This can help him divert lanes as a pass rusher and emerge in front of ball carriers in run defense.

Odighizuwa’s size may seem underwhelming on the surface, but don’t let that fool you. Despite his below-average height measurement, he has uncharacteristically long arms for his height. Odighizuwa uses his elite proportional length to his advantage as well.

His hands can be extremely violent on pass-rushing reps, and he also uses his length to disrupt passers and establish leverage. Being a three-time state wrestling champion at the high school level, the UCLA defensive tackle has an innate understanding of leverage and how to win in those one-on-one situations.

Where can Osa Odighizuwa improve?

Osa Odighizuwa is an amped-up athlete with a lot of potential energy in his frame. His physical makeup gives him enticing potential as a pass rusher, while also providing utility as a run defender. That said, there are a few areas where Odighizuwa is currently lacking.

Odighizuwa has some decent flexibility when working inside, but he doesn’t always play with great balance or bend. Sometimes, it doesn’t take much for him to lose his base, and working against taller, longer linemen can exacerbate this issue.

As mentioned earlier, Odighizuwa’s length is respectable for his size and solid overall. But by the law of general proportionality, offensive linemen who are 6-foot-5 and 6-foot-6 are often going to have comparable, or even better, length than the UCLA defensive tackle. In those situations, he isn’t quite there yet, as it pertains to establishing an advantage and disengaging consistently.

Additionally, Odighizuwa has instances where he gives up too much surface area swimming inside. He can also do a better job transferring power through his length and leverage on pass rushing reps. His flashes prove that he has the natural power and capacity to accomplish this. However, not all of the UCLA defensive tackle’s hand strikes land conclusively. He still needs to work on his precision and technical proficiency at the next level.

It was exciting to see Osa Odighizuwa’s unique physical skill set in action at the Senior Bowl. And for the most part, he was as electric as advertised on the line. Here’s more on Odighizuwa from my summary of his practice performance, via PFN’s National Team Practice Report.

“Osa Odighizuwa had a good Senior Bowl week overall based on my National Team practice reports. After his excellent debut, I expected him to maintain more of a presence throughout the week. Instead, his consistency waned, and he struggled to beat linemen who beat him to the punch at the line. Odighizuwa can do a better job targeting weak spots with his length, but his enticing combination of explosiveness, density, and leverage was very much on display in Mobile. Odighizuwa is likely a safe Day 2 prospect in this class.”

There is some room for polish with Osa Odighizuwa, but he’s still a high-upside NFL Draft prospect with a surprisingly solid floor. The UCLA defensive tackle brings explosiveness, energy, and power. He also has the length to channel that power in both run and pass defense adequately.

Odighizuwa’s smaller frame may give him trouble against longer tackles, but his lower base also gives him a competitive advantage. You might’ve heard the saying “low man wins” when discussing the interior line. Getting lower than your opponent gives you more leverage, and Odighizuwa has the size to maintain the upper — or lower — hand in that department. He’s relatively low and compact, and yet he still has the necessary length to win.

Where does Odighizuwa align schematically?

Odighizuwa has a ton of upside. In this defensive line class, that shouldn’t go overlooked. Christian Barmore likely pulled away as DT1 with his late-season performance. However, Odighizuwa should be one of several battling for the spots behind him.

Odighizuwa is a solid Day 2 pick on my board. However, he’ll likely trickle into Day 3 territory. He projects well as a 4-3 defensive tackle, but he could fill in as a 3-4 defensive end as well. For teams like the Browns, Vikings, and Jaguars, the UCLA defensive tackle could be an excellent value addition.

Odighizuwa has some immediate utility with his pass-rushing ability. However, he also brings substantial long-term potential with his physical tools. In a defensive line class that’s fairly uncertain, scouts should jump at that combination. The UCLA defensive tackle further cemented his appeal with a solid showing at the Senior Bowl and good offseason testing. So long as he holds up his end of the bargain, he’s a versatile starter in waiting.