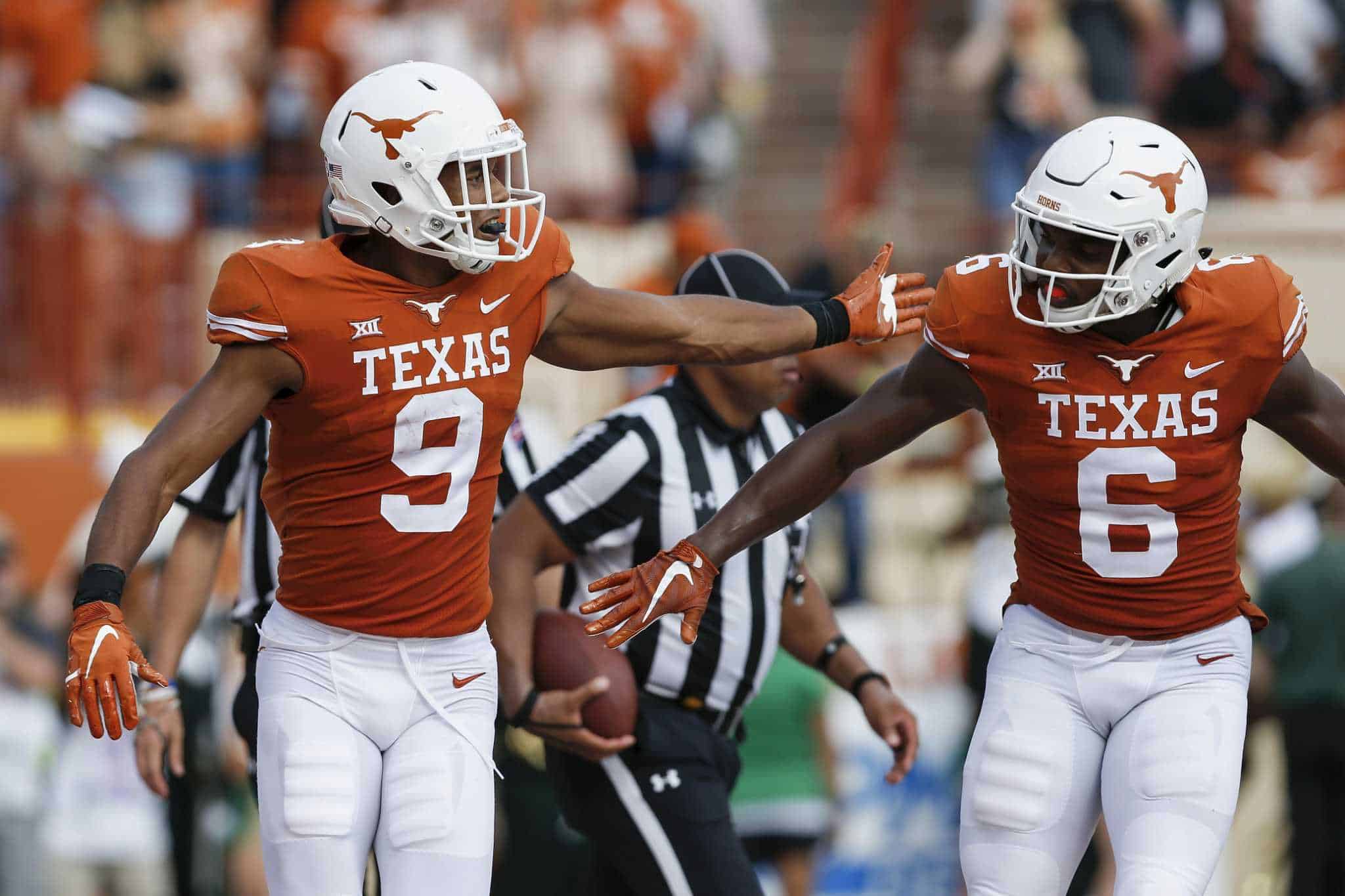 Hello from Mobile! Just one week after the Shrine Game, more than 100 NFL hopefuls along with representatives from the NFL’s 32 teams have descended on Mobile, Alabama for the 2020 Senior Bowl. Practices will take place throughout the week and we will have full coverage here at Pro Football Network. With plenty of free agency and NFL Draft news and rumors buzzing in the air, here’s the latest on what I’m hearing.

After three days of padded practice and the game itself, players, team officials and coaches have left Mobile, Alabama as the book officially closes on the 2020 Senior Bowl. And once again, there’s a lot of draft chatter inside scouting circles on which players helped themselves the most over the course of the week. Here’s what I’m hearing.

Denzel Mims was one of three receivers I raved about all week on podcasts and on Twitter, and scouts agree that the Baylor wideout helped himself. Teams were impressed with the way he separated with his hands as well as the speed he showed during practice.

If he runs well at the combine, Mims will jump into the second day of the draft and may slide into the top 60 picks. I’ve reported in the past that the Baylor senior is expected to time in the low 4.4s and could even break into the 4.3s during predraft workouts.

The other wideout receiving rave reviews is Van Jefferson of Florida. Like Mims, scouts were impressed with the way Jefferson separated from opponents and caught the ball. They believe Jefferson could move into the second day of the draft if he runs fast prior to the event.

While I’ve had Jefferson graded as a draftable prospect going back to his Mississippi days, on film he comes across as a low 4.5/high 4.4-second athlete. This doesn’t mean he won’t produce at the next level; it just means he won’t be selected early in the draft.

Small-school blocker Ben Bartch of St John’s-Minnesota came away a big winner as well. Though there were a few bumps in the road during the week, Bartch held up well, showed good strength and blocked with proper fundamentals. Right now, several teams grade Bartch as a top-100 selection.

Kyle Dugger of Lenoir-Rhyne and Jeremy Chinn of Southern Illinois were two small-school safeties who left Mobile in better shape than when they arrived. There is some concern that Chinn won’t test that well at the Combine or pro-day workouts.

Teams gushed over Utah’s Bradlee Anae and were really impressed with his athleticism and pass-rushing skill. For what it’s worth, some scouts are worried about his arm length, which measured 31 7/8 inches.

Which draft prospects are on the outside looking in at the NFL Combine?

While the official list of NFL Combine invitations won’t be released for a few weeks, the talk during Shrine and Senior Bowl weeks focused on the seniors who are on the outside looking in and may not end up in Indianapolis.

Some of the bigger names include Aaron Parker of Rhode Island, Carlos Davis of Nebraska and Kelly Bryant of Missouri.

Unless things have changed from last week, quarterbacks Shea Patterson of Michigan and Malcolm Perry of Navy could also be on the outside looking in when the Combine begins. There is a chance that each receives an invitation by week’s end.

Finally, there’s good news surrounding Jake Breeland, the tight end from Oregon. The senior, graded as a street free agent before the season began, was off to a great start until a knee injury cut his year short in mid-October.

While Breeland will not be able to work out prior to the draft, I’m told he suffered a clean tear and will be ready to go by summer camp. Likely to end up in the late rounds, Breeland could be one of the steals of the draft at tight end once he gets back to full health.

For those who like to wager or even pay attention to these sorts of things, Nate Stanley of Iowa looked terrific in the College Football All-Star Challenge, which airs Friday on ESPN2. Evidently Stanley, who turned down an invitation to participate in the Shrine Bowl, did not miss a throw.

The second day of Senior Bowl practice is complete, and the buzz around the players and free agent movement just keeps getting louder. Here’s the latest on what I’m hearing.

On Tuesday (below), I reported that the Los Angeles Chargers hope to keep tight end Hunter Henry in the fold and sign him to a contract extension or tag him. Either by mere coincidence or irony, Henry’s agent, Jimmy Sexton, met with front office personnel from the Chargers this morning.

Austin Hooper is another soon-to-be free agent tight end who is expected to sign a big contract once the frenzy begins. Where could Hooper land?

Speculation here in Mobile says the Arizona Cardinals, Green Bay Packers and Seattle Seahawks are teams expected to court Hooper. Don’t leave out the Washington Redskins, who may be ready to move on from Jordan Reed who has struggled with injuries.

Robert Quinn is a free agent come March, but if the Dallas Cowboys have their way, he may not hit the market. I’m told Jerry Jones has been aggressive in letting Quinn know that he wants the pass rusher to be playing in a Cowboys uniform next year. I’m also told Quinn’s preference is to remain in Dallas. If Dallas makes Quinn a competitive offer, don’t expect him to leave town next season.

Darrell Taylor of Tennessee was red-flagged medically and not allowed to participate in the Senior Bowl. I’m told the issue is a left leg injury that has bothered Taylor since last summer and slowed him down during the season.

Alohi Gilman of Notre Dame went down with an injury during the first practice today and walked off the field under his own power. I spoke to Gilman this evening and found out it’s a hamstring strain, which will keep him out of the rest of Senior Bowl practice and the game and will take a couple of weeks to rehab.

PFN Insider Ben Allbright is reporting that the Miami Dolphins are expected to place a heavy emphasis on the offensive line in both free agency and the NFL Draft. Targets are not known at this time because according to sources, the Dolphins have not begun that part of the process yet. Additionally, he continues to report that quarterback Tua Tagovailoa is their preferred target with their first pick in the first round.

Practice for the North and South is complete, yet there’s still plenty of activity taking place during the official first day of Senior Bowl week. Here’s the latest news swirling around the players’ hotel in Mobile, Alabama.

Chargers may use the transition tag on TE Hunter Henry

One of the more interesting stories in the lead up to free agency is Los Angeles Chargers tight end Hunter Henry, who could hit the open market. Henry has been very good when he’s on the field but has struggled with injuries the past two years and played in just 12 games last season.

If the Chargers cannot re-sign Henry before the start of free agency, the belief here at the Senior Bowl is that they’ll place the transition tag on him so they have some options other than losing Henry to another team.

Word here in Mobile is that the Philadelphia Eagles will go hard after a cornerback in free agency. Chris Harris and Byron Jones are two of the names being thrown around, but I expect the Eagles to turn over every rock in free agency in an attempt to fill the position.

Keep this in the back of your mind: New England Patriots scouts were gushing over James Proche during today’s practice – I heard it firsthand. This doesn’t mean they are automatically drafting Proche, but he fits the bill for the type of receiver they love and have great success with.

Linebacker Jordan Brooks of Texas Tech and safety Brandon Jones of Texas were both held out of the Senior Bowl due to shoulder injuries which required surgery. I’m told it was minor labrum type surgery, very common for players in the offseason. Both Brooks and Jones should be ready to go by their respective Pro Days.

Closing in on a new CBA?

I previously reported the league hopes to come to terms on a new collective bargaining agreement before the Super Bowl, but their partners in the NFLPA are very pessimistic. I’m told the union passed on discouraging news to their members and doesn’t see an agreement being hashed out any time soon.

Related | Is Philip Rivers headed to the Tampa Bay Buccaneers with Jacob Eason as his backup?

Early word is that teams will be looking to select offensive linemen and pass rushers early in April’s draft. While this is nothing new, it could mean players presently graded as second-round prospects at these positions wind up in the top 32 due to the need factor.

The name I continue to hear from the offensive line that could move into round one is Ezra Cleveland of Boise State. This is the second time over the past three weeks I have heard as much.

Which Texas wide receiver is higher on NFL draft boards?

When it comes to the battle of Longhorns receivers, many (if not most) teams presently have a higher grade on Devin Duvernay than teammate Collin Johnson.

Prior to the season, Johnson was graded as a top-45 pick while Duvernay was stamped as a late-round pick. Duvernay outplayed his teammate in 2019, and many feel he projects better at the next level as he’s faster, quicker, and a better route runner.

Big week ahead for two top seniors in Mobile

Dayton tight end Adam Trautman is drawing rave reviews from scouts and is poised for a big week. Several teams already grade Trautman as the top tight end from the senior class and have stamped him with a second-round grade.

Meanwhile, I spoke at length with California linebacker Evan Weaver this evening. He looks every bit the part of the tough, no-nonsense linebacker he is on the field. Weaver said scouts told him during interviews the past two days they will specifically be watching how he performs during coverage drills, which should come as no surprise to anyone as that’s the only weakness in his game.