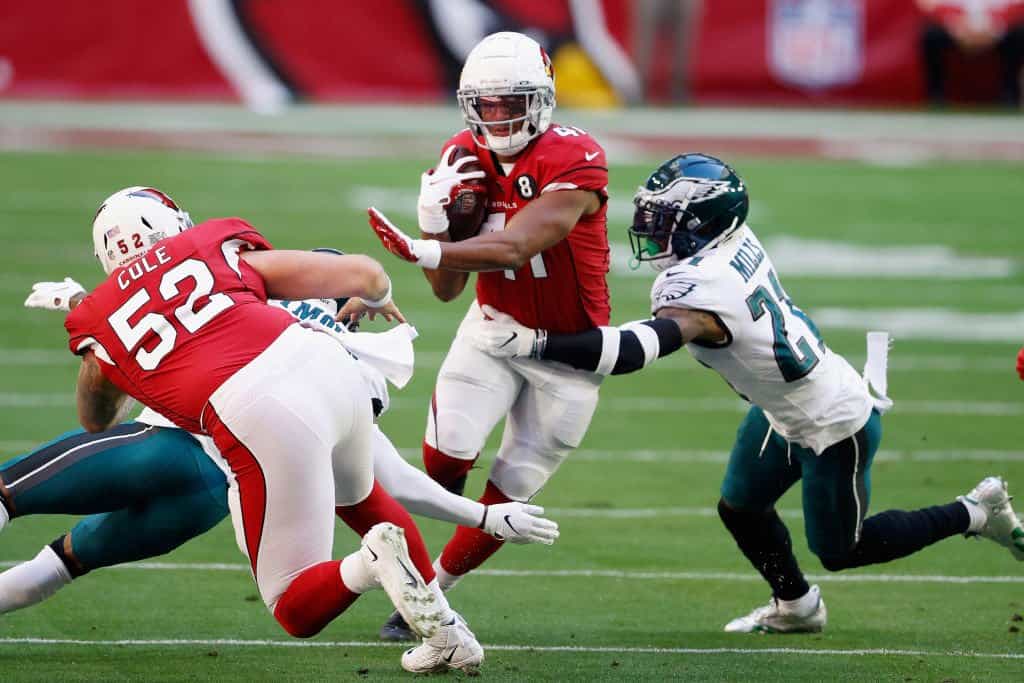 GLENDALE, ARIZONA - DECEMBER 20: Kenyan Drake #41 of the Arizona Cardinals rushes the ball against the Philadelphia Eagles during the first quarter at State Farm Stadium on December 20, 2020 in Glendale, Arizona. (Photo by Christian Petersen/Getty Images)
What's in this article? Click to show
Best landing spots for Kenyan Drake in free agency
Can Kenyan Drake be a more consistent fantasy producer in a new landing spot?
Want more fantasy football analysis and news?

Seattle could move on from Chris Carson. Meanwhile, the Steelers will likely be in the running back market with James Conner hitting free agency. Pittsburgh and the Seahawks could certainly use a guy like Kenyan Drake. However, they will be in the market for a heavier power back in the mold of Carson and Conner.

Atlanta is considered possibly the best landing spot for a top running back like Kenyan Drake in fantasy. However, they too should be in the market for a back with more size and every-down quality. Clearly, that wasn’t Todd Gurley last year.

Atlanta doesn’t have much cap space and has a lot of major needs on the defensive side of the ball. Plus, remember that the Falcons’ new head coach, Arthur Smith, coached Henry in Tennessee with much success. Besides playing together at Alabama, Henry and Drake have very few similarities.

Maybe Chicago or the Raiders would be interested in Drake to complement David Montgomery or Josh Jacobs. Could Miami consider bringing Drake back? It is a different coaching staff, and having someone like Drake could make Tua Tagovailoa’s life easier as he learns his trade. And Miami has plenty of money to spend.

The Jets might take a similar approach by adding Drake to help the transition of what could be a highly-touted rookie quarterback in New York. Neither of those AFC East landing spots would be bad at all for Drake, who could possibly assume the lead role in either Miami or New York without much in his way.

Another team to consider is Jacksonville. It would be much of the same logic as with the Dolphins and Jets. Get a super talented young quarterback a safety blanket in the backfield. In this case, of course, it would be for Trevor Lawrence.

Jacksonville certainly has the money to spend to add someone like Drake, even though their entire roster basically needs attention. Although Drake is talented, it would be tough for him to knock off James Robinson for Jacksonville’s lead role.

How about Green Bay as a landing spot for Drake? The Packers don’t have loads of salary cap space. Yet, Drake shouldn’t be super expensive, and this is obviously a team in win-now mode. Aaron Jones and Jamaal Williams are both free agents, and Jones is certain to demand a large contract on the open market. A.J. Dillon was drafted in the second round last year and looked impressive during short stints as a rookie.

Williams’ skill set is a little redundant to Dillon’s, but Drake’s is a great complement to what Dillon brings as a pounding physical runner. The combination of Dillon and Drake would be affordable for Green Bay and difficult to play against for the Packers’ opponents.

Plus, if Dillon isn’t quite ready to handle the load as a top dog running back, Drake can certainly handle that for a bit. Being in such a great offense orchestrated by Aaron Rodgers would be a fine spot for fantasy production for Drake.

Can Kenyan Drake be a more consistent fantasy producer in a new landing spot?

Drafted by Miami in the third round of the 2016 NFL Draft, Kenyan Drake was traded by the then-tanking Dolphins six games into the 2019 season to Arizona. In those eight games with his new team, Arizona lost six of them. However, Kenyan Drake exploded in his new landing spot. During that stretch, Drake averaged over 80 rushing yards per game with a 5.2 yards per carry average as a Cardinal. He scored 8 touchdowns and caught 28 passes for 171 yards.

Arizona quickly slapped the transition tag on Drake to ensure that he would be back with the team in 2020. Fantasy players certainly took notice, and Drake’s value soared. In fact, in redraft leagues, Drake was routinely selected in the second round, and he was an ascending dynasty asset as well.

This past season didn’t really go as planned for Drake. He no longer carries the value for dynasty owners or in the NFL that he did one year ago. He is now prepared to test the open market as a 27-year-old.

In 2020, Drake missed just one game but couldn’t get to 1,000 yards rushing. Drake averaged an even four yards per carry. He was only thrown to 31 times, which was less than his eight games the year before in Arizona. Drake caught 25 of those targets, but for only 137 yards. Needless to say, Drake’s targets were very short and highly inefficient.

The saving grace for Drake’s fantasy owners last year was his 10 rushing touchdowns. However, considering his body type and style of play and the fact that he only scored 9 rushing touchdowns in his Miami career, it seems unlikely that Drake will be a big-time consistent touchdown producer.

Featured | NFL Dynasty Trade Calculator 2021: Who is the most valuable asset heading into next season?

Even going back to his time at Alabama, where he split time with exceptional running backs (including Derrick Henry), Drake has never really profiled as a bell-cow running back. He has a slender build and best projects as a rotational player with attractive big-play ability. We know that running backs (that aren’t elite) rarely get huge money on the open market in the NFL. And this year, the salary cap could be a huge problem for most teams in the league.

Will a back like Drake get a huge payday when free agency starts? Probably not. Yet, there are a few teams that should have serious interest. The Cardinals will have a need at this position if Drake departs.

Be sure to follow us on Twitter: @PFN365 to stay up to date with all things around the NFL and the 2021 fantasy football season. Also, continue to visit Pro Football Network for NFL news and in-depth analysis while again seeing our fantasy football section for more coverage and up-to-date rankings.

In this article:Featured, Kenyan Drake