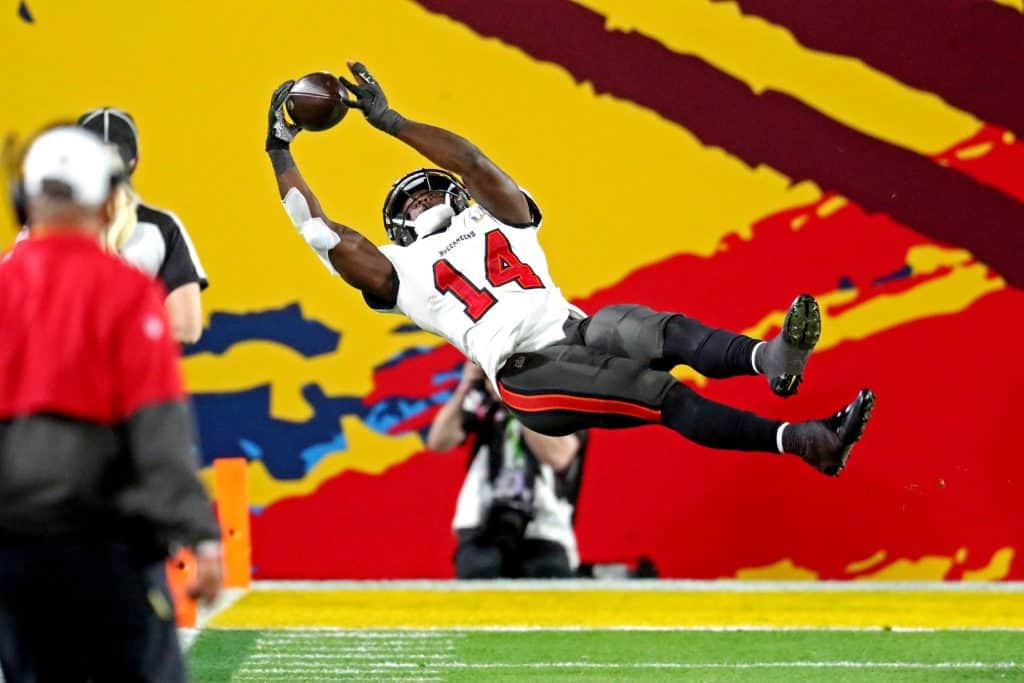 If an NFL team needs wide receiver talent heading into next year, this is the free-agent class to find it. Sitting near the top of the WR free-agent cohort, looking for potential new landing spots, is Tampa Bay Buccaneers WR Chris Godwin. Given his age and high level of production, Chris Godwin could see the largest contract among the wide receiver class if Tampa Bay lets him hit the open market.

As he hits free agency, Buccaneers WR Chris Godwin has become one of the NFL’s elite receivers

Since his selection out of Penn State in the 2017 NFL Draft, we kept waiting on the player we saw to blossom into the everyday elite asset we saw on film. Thanks to the hyper-aggressive nature of Jameis Winston, Godwin thrived in 2019. In his first year with Bruce Arians as the head coach, Godwin led the team across the board in receiving stats. Playing in 14 games, he caught 86 of his 121 targets for 1,333 yards and 9 touchdowns.

With Winston now in New Orleans, Godwin’s potential chemistry with Tom Brady was a salient question in 2020. For Chris Godwin, who was entering his contract year, the Buccaneers WR’s production in 2020 would have massive implications on his next contract’s earning potential.

Godwin produced while struggling to stay on the field in 2020

The issue for Chris Godwin was not his play in 2020 but staying on the field. Godwin suffered a concussion in Week 1 that cost him a start in Week 2. Additionally, a hamstring issue sidelined him for Weeks 4 and 5. And finally, a fractured finger suffered in Week 7 cost him one game.

Another obstacle manifested. An unexpected challenger for targets was added to the team midseason: Antonio Brown. Between the injury and Brown’s arrival, Godwin did not put up the same numbers as 2019, but he was still effective. Playing in 12 games, Godwin caught 65 of 84 targets for 840 yards and 7 touchdowns.

Since coming into the NFL, Chris Godwin has been fantastic. Over his last three seasons, Godwin has averaged 1,005 yards, 70 receptions on 100 targets, and 7.7 TDs per season. With NFL success predicated on having a passing attack, Buccaneers WR Chris Godwin brings a rare skill set to wherever his new landing spot will be in free agency.

Due to lost revenue of the 2020 season, the NFL salary cap took a massive hit. While it has yet to be nailed down, current estimations have the salary cap around the $185.5 million range. Earlier in the year, the NFL and NFLPA agreed on a floor of $180 million, but there is a chance we see it creep close to $190 million.

Because of this, teams will be cash-strapped and have to make difficult decisions regarding veterans and how bullish they can be in free agency. Will this keep new landing spots from giving out large contracts to sign free-agent WRs?

As for someone like Buccaneers WR Chris Godwin, there is a solid case he should receive the largest WR free-agent contract. Spotrac has his market value estimated at $17.1 million over a four-year, $68 million contract. If this does happen, Chris Godwin would be a top-five highest-paid wide receiver in the NFL.

However, this is all moot if the Buccaneers don’t allow WR Chris Godwin to hit the open market and test free agency, which is a very real possibility.

If he hits free agency, where are potential landing spots for Chris Godwin in 2021?

All of this speculation could be for not if Tampa Bay places the franchise tag on WR Chris Godwin, preventing him from testing free agency. The way things stand currently, to franchise tag a wide receiver would cost a team $16.4 million on their one-year deal.

If the Buccaneers choose this route, they’d be investing over $33 million in Chris Godwin and WR Mike Evans. Even in a cash-strapped season where the Buccaneers enter 2021 with an estimated $19 million in cap space, they are in a win-now window. After all, they are coming off a Super Bowl victory. So long as they have Tom Brady, they need to provide him all the weapons they can.

While the Buccaneers have several other needs to address in free agency, keeping WR Chris Godwin off the market could be a needed expense.

Indianapolis could be a landing spot for Chris Godwin

Godwin to the Colts checks a lot of boxes for potential fits. Indy is a team that values culture and is close to competing for an AFC title. Chris Godwin checks the culture box and makes them even better. They have the cap space, without a doubt. The Colts have the fifth-most projected cap to work with at $50.57 million in 2021.

Also, Indianapolis needs wide receiver depth. T.Y. Hilton is aging and also a potential free agent. From there, they have 2019 draft pick Parris Campbell who missed all of 2020 with a knee injury, and Michael Pittman Jr. Yes, they love Pittman, but he isn’t a No. 1 option. He is a Vincent Jackson/big body-in-the-red-zone-style player. Chris Godwin, however, is a real No. 1 option.

The Colts just traded for QB Carson Wentz, and for that to be a profitable decision, he needs pass catchers. Bringing on Chris Godwin in free agency would be a perfect fit for 2021 and beyond.

The New England Patriots have the worst skill group in the NFL right now. Honestly, I don’t think it is that close. N’Keal Harry has been a bust, and Julian Edleman is 34 years old and struggles to stay on the field. In 2020, their top WR was a UDFA from NC State (Jakobi Meyers).

The Patriots desperately need help at receiver to retake the crown from the Buffalo Bills. Sitting with the third-most cap space ($72.619 million), the offense needs a complete overhaul.

If Chris Godwin does choose New England as the landing spot, he would instantly be the favorite target of whoever is under center. New England needs to make a splash in 2021. Otherwise, they could quickly end up in fourth place in the AFC East.