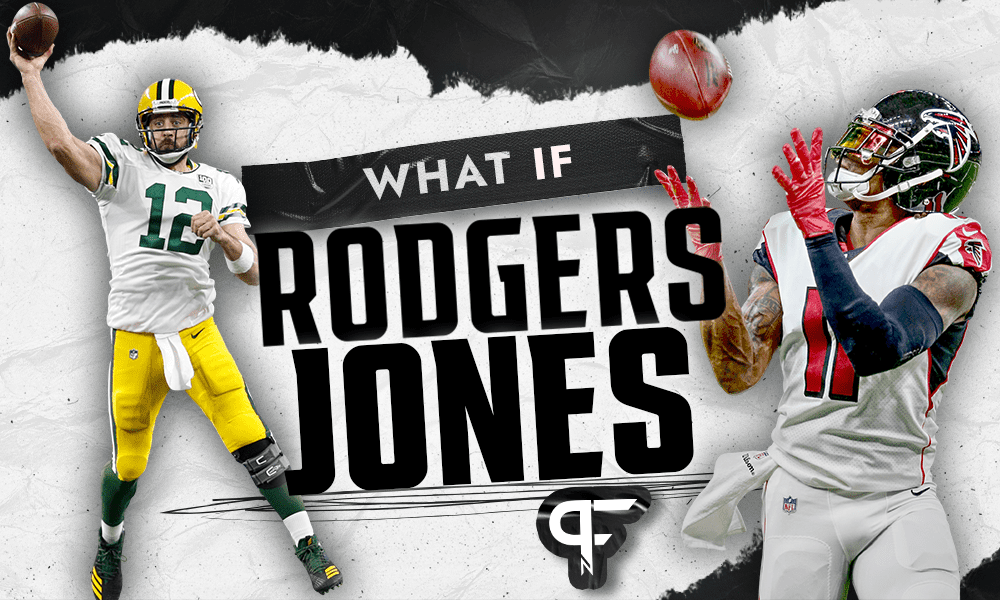 NFL Rumors: Could a Julio Jones trade keep Aaron Rodgers with the Packers?

The Aaron Rodgers trade rumors continue to trickle in. Rodgers and the Packers have endured a tumultuous situation for quite some time now. The 10 episodes of Rodgers guest-hosting Jeopardy could be a sign of things to come for the 2020 NFL MVP. It’s another card for the QB to play against the Packers in their battle. After confirmation that Julio Jones did, in fact, request a trade, the rumors are swirling around his potential landing spots. Could the Packers throw a Rodgers-esque Hail Mary and mend the fence by trading for the two-time All-Pro receiver?

ESPN NFL Insider Adam Schefter dropped a bomb on the first day of the draft when he reported Rodgers told members within the franchise that he did not want to return to Green Bay in 2021. However, it seemed unlikely then, and even more unlikely now, that the Packers would consider actually moving on from the 37-year-old reigning league MVP. And the NFL odds were never in favor of the Packers moving Rodgers to Tennessee.

Multiple teams tried trading for him. There were rumors that the Los Angeles Rams and San Francisco 49ers attempted to trade for Rodgers leading up to the NFL Draft. The Rams’ attempt occurred before swapping Jared Goff for Matthew Stafford and a few picks. The 49ers tried calling Green Bay on the day before Round 1, but conversations quickly ceased.

Sources tell PFN Chief Draft Analyst and NFL Insider Tony Pauline that, despite the rumors, the Packers are hellbent on keeping Rodgers. Pauline explained: “It could be a long standoff.”

Jones made a surprising appearance on the FS1 show “Undisputed” on their May 24 episode. Shannon Sharpe called Jones live on the air so he could address the trade rumors himself.

The explosive call sent waves through the NFL community and had insiders confirming that Jones requested a trade out of Atlanta months ago. Jones made one thing clear during the call — he wants to compete for a championship. Given the Rodgers trade rumors, why not pair them together?

“Some people in the league believe the Packers should make a play for Julio Jones,” says Pauline. “He would be devastating across from Davante Adams, the Packers barely addressed the receiver position the past two drafts (which was stacked with talented WR options), and it would be an olive branch in trying to lure Rodgers back to Green Bay.”

It doesn’t address what is probably the core issue in the Packers’ relationship with their veteran signal-caller. Rodgers’ unhappiness with the organization stems from last April. They failed to inform their star QB that they were trading up to draft his eventual replacement.

Green Bay’s receiving corps outside of Davante Adams was anything but impressive. Yet, instead of strengthening the position in an incredibly deep 2020 receiver class, they traded assets for Jordan Love.

The rumors of a Jones trade to Rodgers and the Packers make too much sense. Still, it’s difficult to envision how the Packers could make this work without working their salary cap due to Jones’ contract. They finally addressed the position in Round 3 this year, but they selected Amari Rodgers, who is decidedly a slot receiver option. Adding Jones makes this team a different beast.

Be sure to follow us on Twitter (@PFN365) to stay in the loop on all things around the NFL beyond Aaron Rodgers and Julio Jones rumors. Also, continue to visit Pro Football Network for NFL news and in-depth analysis concerning the 2021 season.