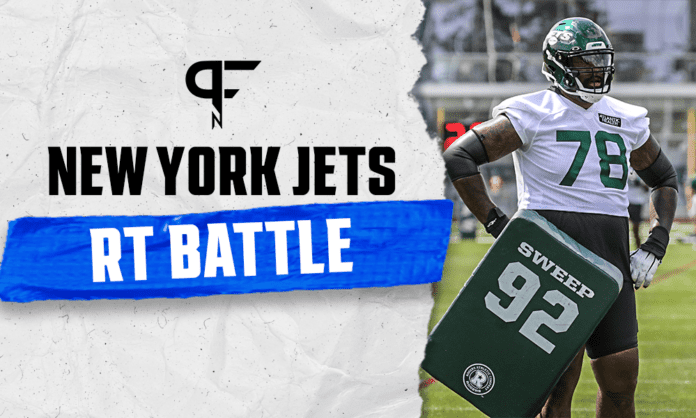 The New York Jets have had a number of significant personnel misses in recent years, but they might have had a pretty big hit in right tackle Morgan Moses. With George Fant currently sidelined, the Jets’ signing of Moses is already paying dividends.

A month after signing Moses to a one-year, $3.6 million contract, the Jets have been more than pleased by his performance, which has exceeded their expectations, a club source tells PFN Chief Draft Analyst and NFL Insider Tony Pauline.

So there’s certainly reason to believe that Moses’ 96-game starting streak will reach 97, particularly with George Fant sidelined by the league’s COVID-19 protocol for the first week of training camp. (Jets media did spot Fant doing conditioning work Tuesday, a sign that his return to the practice field is near.)

But what has endeared Moses to Jets’ coaches the most? His willingness to take 22-year-old Mekhi Becton under his wing.

Short of an incredible rookie season by Zach Wilson, the Jets aren’t going anywhere in 2021. Yet, Joe Douglas has gone about the business of assembling a talented young nucleus on offense, and Becton will be a big part of whatever success New York has going forward.

Moses has also been a positive influence on Wilson in the short time they’ve spent together, we hear.

“As a veteran guy, if I can make myself a little bit better every day then I’m moving in the right direction,’’ Moses told the New York Post Monday. “If I can bring somebody else along with me, then that’s two people that are getting better out of the 53. That’s how you create that brotherhood and chemistry on and off the field with teammates.”

Morgan Moses has taken advantage of opportunity with George Fant out

Moses was never really part of the Jets’ offseason plans. But those plans changed when the Washington Football Team cut him following the NFL Draft. WFT had granted Moses permission to seek a trade, but his salary was too high for teams to be interested. So Washington cut him, saving $7.8 million in cash.

A few weeks later, he landed in New York to compete with Fant, who started 14 games for the Jets in 2020. But Fant has been on the reserve/COVID-19 list since the beginning of camp, and Moses has taken advantage of the opportunity.

So much so, in fact, that the Jets could give real thought to making this more than a one-year partnership. Should Moses continue to impress, don’t discount the possibility of an extension keeping him in New York beyond 2021. Fant is due $9.3 million in base salary in 2022, but none of that is guaranteed.