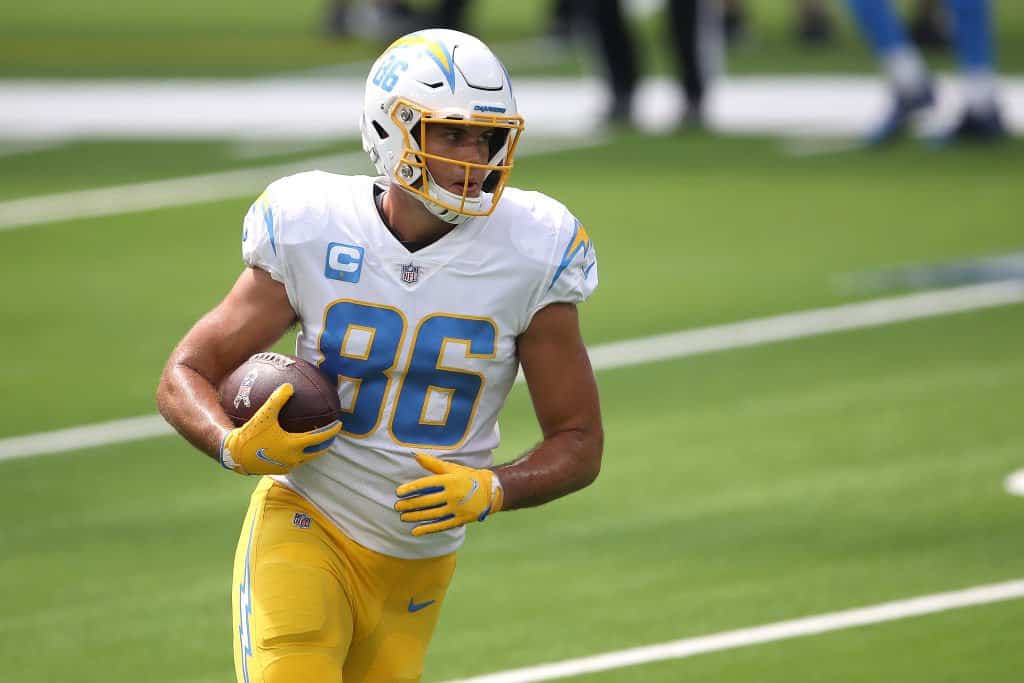 INGLEWOOD, CALIFORNIA - SEPTEMBER 27: Hunter Henry #86 of the Los Angeles Chargers warms up prior to a game against the Carolina Panthers at SoFi Stadium on September 27, 2020 in Inglewood, California. (Photo by Sean M. Haffey/Getty Images)
What's in this article? Click to show
Free Agent Spotlight: Hunter Henry
Hunter Henry and the tight end free-agent market
Where will Hunter Henry play in 2021?
Want more NFL news and analysis?

As the best NFL tight end on the free-agent market, Hunter Henry is about to get paid in 2021. But by whom? And will he be worth it? Henry has been one of the Los Angeles Chargers’ offensive focal points when healthy for five seasons. Yet, “when healthy” is a pretty big qualifier.

Henry helped Justin Herbert become the Offensive Rookie of the Year, but he was more of a safety valve and possession receiver than a big-play machine. Hunter Henry could help a contender get over the top or provide a rebuilding team with a security blanket for a young quarterback in 2021. But that should only be if the price is right and expectations are relatively modest.

Hunter Henry by the numbers

Henry set career-highs in targets (93) and receptions (60) in 2020 and played in 14 games, the second-most of his career. He finished the season with 613 yards and 4 touchdowns. Hunter Henry’s 10.4 yards per reception were nothing to break the bank for in free agency either.

He finished 30th in the NFL in that category among tight ends with 25 or more targets. That was below unheralded players like the Houston Texans’ Jordan Akins (10.9) and the Seattle Seahawks’ Will Dissly (10.5).

Henry was at his best catching short passes over the middle of the field in 2020. Per Sports Info Solutions, Henry caught 33 passes for 290 yards within seven yards of the line of scrimmage in the areas of the field marked “left middle,” “middle,” or “right middle” on the play-by-play. Yes, that’s a complicated set of parameters — just think “short middle.”

That’s some steady production, but it leaves just 27 receptions and 323 yards on every other type of pass. That’s a bit of a limiting factor on Henry’s value.

Henry caught just 5 of 15 passes of 15-plus air yards in 2020 for a mere 96 yards. Several other tight ends produced more yardage on deep passes. Those TEs include Richard Rodgers of the Philadelphia Eagles (their third tight end), Irv Smith of the Minnesota Vikings, Logan Thomas of the Washington Football Team (whose quarterbacks needed a running start to throw the ball 15 yards), and Dan Arnold of the Arizona Cardinals.

A review of Henry’s film shows that he is excellent at finding holes in underneath zones or gaining separation on short routes. He uses his body well to shield defenders from the ball and disengage (a.k.a. push off a teensy bit) after contact.

Henry is a fine safety-valve receiver that typical linebackers cannot cover. He is NOT a Travis Kelce who commands coverage from a cornerback, a George Kittle likely to break lots of tackles after a reception, or a Rob Gronkowski who can pummel defenders in the run game while waiting his turn on offense.

Injuries have been a factor for Hunter Henry throughout his career

Henry missed the final two games of 2020 because of league protocols. Here’s hoping/praying that his next employer won’t have to worry about that sort of thing. Still, Hunter Henry did miss all of 2018 due to an ACL tear. Additionally, Henry has suffered a variety of leg and kidney injuries throughout his career.

It may be unfair to call Henry “injury prone.” Yet after five seasons, we are still talking about what he is capable of doing instead of what he has done. That bakes a little risk into any projection of what he can do in 2021 and beyond.

Henry may be a notch below the NFL’s elite tight ends, but he’s the best player by far at his position on the free-agent market. After Henry, some players are likely to be prioritized by their current teams, such as Gronk, Robert Tonyan, and Jonnu Smith.

Henry is the best plug ‘n’ play option as a starter and primary passing-game weapon on the 2021 free-agent board.

Teams looking for a tight end in the draft will find Florida’s Kyle Pitts and little else. Pitts looks like Shannon Sharpe, and he may be a top-10 pick. Other top tight end prospects include Penn State’s Pat Freiermuth and Miami’s Brevin Jordan. Neither player looks like an immediate difference-maker.

So Henry doesn’t have to be Kelce or Kittle to cash in. Hunter Henry is better than most of the available 2021 options, and that’s all that matters in free agency.

Where will Hunter Henry play in 2021?

Let’s run down a long list of potential suitors as quickly and efficiently as possible.

The Patriots are a popular choice for Hunter Henry on the internet. That may be because the Patriots have a considerable fan base hungry to hear about potential offensive upgrades, not because there have been any overtures between the player and the team.

The Patriots have $62 million in cap space entering 2021, but most of that could disappear once the team starts sifting through its own free agents. It’s fun to say Henry could be the Patriots’ replacement for Gronk, but Gronk isn’t the legend the Patriots most need to replace.

It wouldn’t be an offseason without the Jaguars splurging on one of the biggest names in free agency. Henry could be Julius Thomas all over again! Remember Julius Thomas? Kidding aside, overpaying a bit for a possession tight end wouldn’t be all that foolish if it expedites Trevor Lawrence’s development.

Can you even name a Jets tight end from the last decade? Sure, Chris Herndon has his moments. And Dustin Keller was pretty good in the Tim Tebow era. Anyone else? Please don’t say “Austin Seferian-Jenkins.” The Jets, like the Jaguars, could use a guardrail for their next quarterback. For New York, paying a little extra for one might be worth the expense.

Washington will either be developing a young quarterback, reviving some reclamation project, trying to keep Alex Smith out of the S.W.O.R.D. experimental medical facility, or doing whatever one does with Taylor Heinicke in 2021. Under any of those circumstances, it will make sense to have someone handy like Hunter Henry, who can gobble up 5, 6, and 7-yard receptions per game for 2021 and beyond.

Henry would provide an immediate upgrade over Tyler Kroft. He could thrive in all the space that Josh Allen and Stefon Diggs create underneath. In general, it’s fun shopping for the Bills. Simply because they genuinely appear to be one player away from the Super Bowl. And they are financially fluid enough to afford most “one players.”

With $23 million in paper cap space entering the 2021 offseason, the Chargers could certainly re-sign or franchise tag Hunter Henry. That would keep the Justin Herbert/Keenan Allen band together. The Chargers are more likely to retain Allen than edge rusher Melvin Ingram, their other big-name, in-house free agent.

However, the penny-pinching Chargers usually avoid bidding wars. If they considered Henry irreplaceable, they would likely have tried to extend his contract before he reached the market.

Folks, the NFL is still fine-tuning the 2021 cap numbers. Many teams are in the red right now. Additionally, franchise tags, restricted free agent tender offers, restructurings, and cuts are just beginning. Not to mention we are all sitting at home right now instead of getting tipsy and gossiping at Prime 47 in Indianapolis.

Anything could happen over the next month or so. All that is certain is that Hunter Henry will be in hot demand in the 2021 free-agent market. The team that signs him should be happy with what they get. So long as they are not expecting Kelce, Kittle, or Gronk.