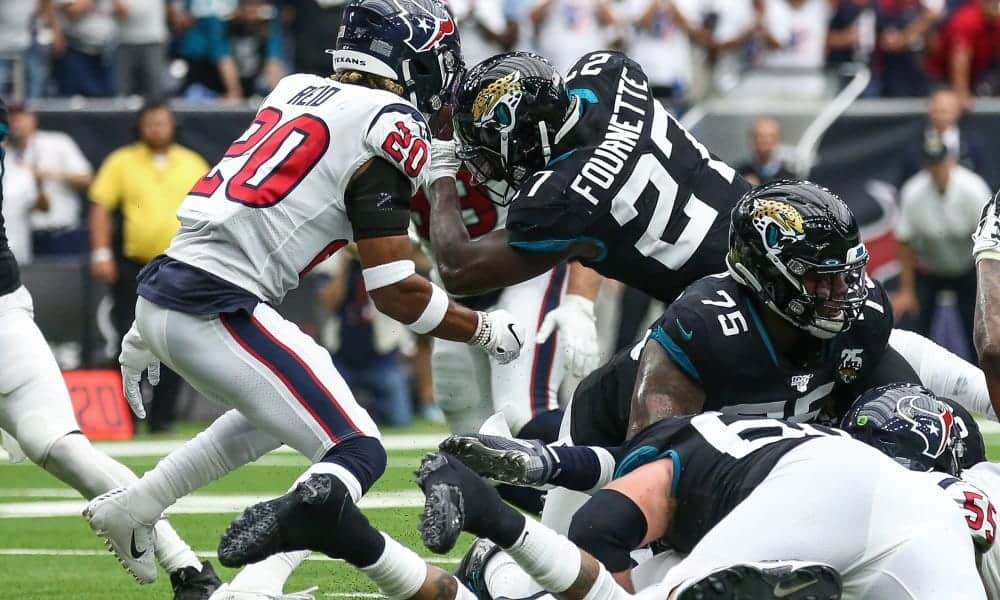 It has been a bittersweet start to the season for the Houston Texans. The opening Monday Night game of the season had just about everything you could want from a football game. There was star power, points, competition and a down to the wire finish. Unfortunately for the Texans, they fell victim to Will Lutz’s 58-yard bomb of a field goal as time expired.

For the team and fans alike, they entered Week 2 with a sour taste in their mouth following the heartbreaking loss. However, there is surely room to be proud after almost knocking off a Super Bowl favorite on the road and on the big stage. The only thing Houston could do that week was getting back on track and kick off division play with a win.

They did just that. In a fairly dormant game, a Whitney Mercilus sack forced fumble proved to be the difference-maker. This gave Houston tremendous field position at Jacksonville’s 11-yard line. On fourth down, Watson would pound it in to give the game its first touchdown. The Jaguars weren’t going to go down without making it dramatic.

Rookie quarterback Gardner Minshew connected with D.J. Chark with just seconds remaining to put the Jags down one. Doug Marrone opted to play it aggressively, contrary to the entire gameplan. Maybe he didn’t trust his offense in overtime; so why not go for the win when you’re already on the doorstep? I don’t disagree with the play call. Regardless, Justin Reid was there to meet Leonard Fournette in the hole and seal Houston’s first win of the season.

Running game proving its worth

Running back was one of the biggest weaknesses for the Texans entering the season. Following the season-ending injury to Lamar Miller, that was only enhanced. The acquisition of Duke Johnson a few weeks prior softened the blow. However, Houston knew they needed more. Thus, they struck a deal with Kansas City on the final day of roster cuts and brought Carlos Hyde to town.

This is what you don’t get with Lamar Miller. Hyde is a good straight-line runner and he’s the guy who can give you some breathing room when you’re backed up in your own zone.

OL does a really good job collectively on this play too. pic.twitter.com/vNjxcEsZsy

The team sacrificed young offensive linemen Martinas Rankin. Although he failed to impress during his short time in Houston, the potential is still there with him. If anyone can develop an offensive lineman, it’s Andy Reid; and Rankin has the tools. Regardless, the investment has already paid dividends for the Texans.

Entering Week 3, Houston possesses a top-five rushing offense in the NFL. They’re second in the league with 5.8 yards per attempt but lead all teams with at least 40 carries. Hyde has been a pleasant surprise through the first two weeks. He opened with a strong showing against New Orleans and carried that momentum into this past Sunday.

Hyde is a patient runner who presses the line and takes what he’s given. He has viable burst through running lanes. However, it’s his physicality and ability to finish runs where he accumulates a good amount of his yardage. That aspect of Hyde’s game is where the Texans see an upgrade from Lamar Miller. Hyde has seemingly been good for at least four or five yards a pop thus far.

Look at Cullen Gillaspia coming up for the lead block! Hyde springs free for Houston’s biggest gain on the ground. pic.twitter.com/QS96TO2ccY

As for Duke Johnson, he was mostly contained as he only saw six touches. It was nice to see him involved in Week 1 just to have his touches slashed in half this past Sunday. Still, he did enough to move the needle as he averaged five yards per rush. I look for him to be more involved next week, especially in the passing game. Like Hyde, Johnson has been a productive runner and averages nearly six yards per rush.

Moving forward, the running game must remain consistent. The offensive line can’t be depended on (yet) for the Texans to be one dimensional. That unit has been noticeably steadier run blocking than pass blocking. It’s just as imperative for that to remain, as well as the high-level play of Hyde and Johnson. They’ll face their toughest task yet this week against the Chargers’ stout front.

As per usual, the offensive line play for the Texans has provided a roller coaster of emotions already through two weeks. The investment in Laremy Tunsil is looking good thus far. Although, it’s still far too early to judge the trade entirely. Still, he’s been the bodyguard Deshaun Watson needed at the blindside.

For their matchup against Jacksonville, the Texans made two changes on the offensive line. Tytus Howard made his NFL debut after missing Week 1 as a broken finger healed. Howard started at left guard and Roderick Johnson relieved Seantrel Henderson at right tackle.

It was an up and down introduction to the NFL for Howard, which shouldn’t come as any surprise. The Texans tried to keep him away from isolated blocks as much as possible. Howard was often implemented on combo blocks or received help from Tunsil or Nick Martin. He was exposed a few times, especially as a run blocker. No one expected him to be perfect out of the gate. However, if Howard can at least show development from week to week, that’ll boost Houston’s offensive line substantially this season.

Another bad rep from Howard. Martin also got beat here.

Duke Johnson only had six carries but the line was noticeably worse blocking for him than Hyde. Johnson still managed over 5 yards per carry. pic.twitter.com/c0cW32LuXH

As for Johnson, he too endured a rocky game, most noticeably in pass protection. He struggled in his pass sets throughout. Often times not getting enough depth in his kick step, it was easy for the opposing rusher to maneuver around and into the backfield. Johnson’s hand usage was off as well. Too often he was loose on his strike and didn’t get optimal placement on the inside of his opponent. Despite the struggles, Johnson still looked like an upgrade over Henderson. Johnson has swing tackle potential. Hopefully, he can continue to grow in his starting role, for now.

Like last week, the Texans started out in some empty sets but abandoned it as the game went on.

Roderick Johnson had a rocky game. He’s gotta get more depth in his pass set. Luckily Watson steps up to avoid the rush and move the chains. pic.twitter.com/wmtkdivflr

The recently extended Nick Martin has been rock solid in the middle for Houston. While I still feel the money was a bit generous, I admire the Texans for attempting to solidify the longevity of their line. They now have Martin until 2022. Tunsil is under contract for another couple of seasons. Howard has five years left in Houston, assuming they pick up his rookie option. That’s not a bad core, especially considering the state of this line just a year ago.

Defense runs through the front seven

It’s fair to say the presence of Jadeveon Clowney has been missed on Houston’s defense. However, that doesn’t mean they haven’t played at a high level. Whitney Mercilus has been a mad man thus far. He already has three sacks, two forced fumbles, and an interception. With Clowney’s departure, everyone was looking at him to step it up. He’s answered the call and was even named AFC Defensive Player of the Week.

Will Richardson had absolutely no chance against this Mercilus spin move. Another sack for the AFC Defensive Player of the Week. Pulverizes Minshew. pic.twitter.com/Si87AGiaJk

The success the Texans have had upfront has all come without J.J. Watt producing. The star pass rusher has been kept in check to this point. The Saints did a tremendous job containing him in Week 1. Ryan Ramczyk was phenomenal and even then New Orleans was offering help a lot of the time.

This past week, however, Watt was often isolated against a single blocker. He did have some disruptive reps, but we all know he wants to get to the quarterback. It wouldn’t surprise me if he grabs a couple this week against the Chargers’ banged-up offensive line.

Manning the nose tackle position, D.J. Reader has been the unsung hero on Houston’s defense. He’s made a big impact against the run whether he’s blowing up the ball carrier or eating blocks upfront. Reader is arguably Houston’s most coveted pending free agent.

Reader forcing his way into the backfield for the run stop. Arguably Houston’s most coveted pending FA, he’s set to make himself some decent ? pic.twitter.com/dfaza3fsdC

The star linebacking duo of Benardrick McKinney and Zach Cunningham has been outstanding. Cunningham was all over the field this past Sunday. He led the game in total tackles and racked up a sack as well. McKinney has been the exact thumper he’s been as he has his sights set on another Pro Bowl appearance.

D.J. Reader takes on two blocks to open a lane for Zach Cunningham who flies in for the sack. Brings on a 3rd & 17 on Jacksonville’s opening drive.

Angelo Blackson topples A.J. Cann but he may have tripped over RT’s left leg. pic.twitter.com/FBPr2Ciy82

Two under the radar guys I’m looking at to step up over the ensuing weeks is rookie Charles Omenihu and the newly acquired Jacob Martin. Omenihu was heavily utilized late in the game against Jacksonville when the Texans wanted to generate pressure. The fifth-round pick recorded his first career sack this past week and his role will only grow from here. Martin will also see an increased role moving forward. The Texans implemented him more this past week where he had a nice hurry early. He’s a young, toolsy player who has a big opportunity to establish a role as a rotational pass rusher.

The first career sack for Charles Omenihu and he forces the fumble. Good rookie battle as he’s matched up with Jawaan Taylor. Omenihu wasn’t utilized all that much until the 4th quarter when the Texans wanted to generate pressure.