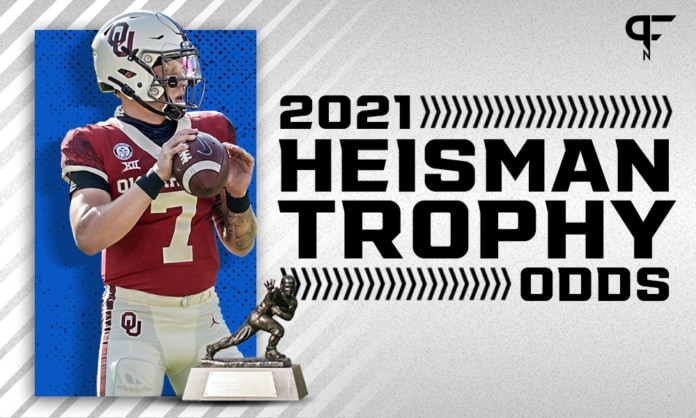 After being benched, is Spencer Rattler out of the Heisman conversation for good? We have all the latest Heisman Trophy odds after Week 6.

Week 6 of the college football season contained the usual thrill ride of offensive shootouts, surprise results, and exceptional individual performances. How did Week 6 shape the Heisman Trophy odds? Has a one-time favorite lost his chances of hoisting the Heisman?

One year ago, Spencer Rattler was benched during the Red River Showdown. The ignominy of that ride on the pine in Oklahoma’s showcase game of the season sparked a revival, a progression, and a development in the young passer that catapulted him into early QB1 and Heisman Trophy conversations.

The future doesn’t look so bright for the Sooners’ signal-caller after another benching on Saturday. As Oklahoma slumped to a 28-7 halftime deficit, Rattler went just 8/15 with 111 yards and an interception.

In a dramatic regression akin to the difficult start to his 2020 season, Rattler also gave up a fumble. Even worse, the distinctive quarterback sat on the sideline as his replacement, Caleb Williams, helped engineer a dramatic 55-48 comeback win over the Texas Longhorns on Saturday afternoon.

Rattler’s Heisman Trophy odds have been lengthening steadily since Week 1. However, at +6000, he’s now the longest shot he’s been all year to claim college football’s greatest individual accolade. Furthermore, he’s slipping dramatically down draft boards and might not even be the starter when the Sooners face TCU in Norman in Week 7.

Following a relatively pedestrian start to the season, including a defeat to Oregon, C.J. Stroud faced questions about his ability to lead the Ohio State offense. Freshman running back TreVeyon Henderson carried the Buckeyes early in the season. Rightfully, he earns a place in the Heisman Trophy race with odds of +3000 following his performance of 102 yards and a touchdown in a 66-17 win.

However, on Saturday against Maryland, Stroud had the breakout game that Ohio State fans have been waiting for. The redshirt-freshman quarterback threw for 506 yards and 5 touchdowns.

Stroud saw his Heisman Trophy odds slashed from +2200 last week to just +800 following his Week 6 performance. If he continues to perform to this level down a tough Big Ten stretch for the Buckeyes, there’s every reason to believe that Stroud should be in the conversation in December.

Olave and Wilson have odds of +15000 per DraftKings, ensuring consecutive WR winners of the Heisman Trophy will be daunting.

While the Ohio State duo are the front-runners to be the WR1 of the 2022 NFL Draft class, are they even the best bet for a wide receiver winner of the Heisman? Not according to the latest DraftKings Heisman Trophy odds.

Currently, Jahan Dotson, Drake London, and Jayden Reed are the shortest odds you can get on a WR to win the award at +10000. Dotson had a relatively quiet day at the office in Week 6. The rising prospect has been in electric form this season but was held to just 48 yards on 8 receptions as the Nittany Lions fell to Iowa in a wild Big Ten showdown.

Likewise, Reed played somewhat of a second-fiddle role as Michigan State continued their unbeaten start to the season with a 31-13 victory at Rutgers. Teammate Jalen Nailor was the wide receiving weapon for the Spartans, snagging 3 touchdowns and 221 receiving yards.

While Dotson and Reed underwhelmed, London continues to be the only positive in a dreadful season for USC. After amassing 162 yards and 1 touchdown on 16 receptions, the athletic anomaly now has four consecutive 100-plus-yard games as he cements his reputation as one of the best wide receivers in the 2022 NFL Draft class.

While Nailor put up impressive numbers for the Spartans, his teammate Kenneth Walker III continues to be the engine that makes the Michigan State train run. The junior rusher has been the surprise package of the season. If he were a quarterback, he’d be the clubhouse leader for the Heisman after Week 6 of the college football season.

Walker added another 232 rushing yards and a touchdown, averaging 8.0 yards per carry. He’s a genuine riser in the running back class of the 2022 NFL Draft, putting pressure on the likes of Isaiah Spiller and Breece Hall. DraftKings slashed his Heisman Trophy odds to +1200 after his latest impressive performance. Walker is now the joint-front-runner to be the first running back since Derrick Henry to lift the award.

Lurking behind him is Texas’ Bijan Robinson. In my opinion, there isn’t a player in college football who means more to their team than the sophomore running back. While he “only” put up 137 rushing yards and a score in the offensive slugfest that was the Red River Showdown, he did so against an Oklahoma defense that was previously allowing less than 100 yards per game.

Furthermore, his very presence allowed the Texas offense to open up the passing game. Robinson reminds me of watching the best high school players dominate even their stiffest competition. He’s a true man amongst boys at the college level, a Sunday player suiting up on Saturdays.

Despite defeat, Bryce Young holds on to Heisman hopes

While Robinson and Walker continue to dominate, the potential for a running back to win the award remains a relative long shot. Like the NFL MVP, the Heisman will remain a quarterback-driven award, and right now, two clear protagonists keep elevating their game.

Matt Corral helped Ole Miss outlast Arkansas in a classic college football shootout. The potential QB1 of the 2022 NFL Draft class went 14-of-21 passing for 287 yards and 2 touchdowns passing while further demonstrating his creative mobility with 94 yards and 2 touchdowns on the ground. As Rattler sinks, Corral continues to soar.

However, it is Alabama QB Bryce Young who remains the Heisman Trophy odds favorite. In the surprise of the day, Alabama lost 41-38 to Texas A&M. Yet, Young threw for 369 yards and 3 touchdowns in the defeat. The second-year signal-caller continuously demonstrates NFL-caliber capability. Unfortunately for QB-needy teams in a murky 2022 class, they’ll need to wait at least another year for the talented Crimson Tide prospect.

In the meantime, DraftKings will give you Heisman Trophy odds of +180. Alabama faces Mississippi State in Week 7. It would be a foolish man who bets on a consecutive defeat for the Crimson Tide. As a result, Young could see his Heisman Trophy odds cut again next week.