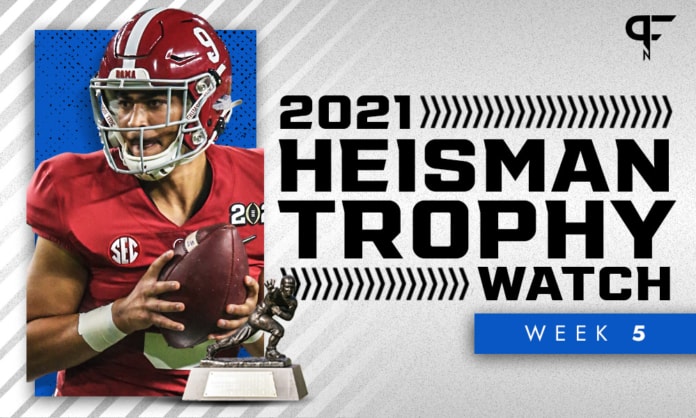 The battle of Heisman Trophy-contending quarterbacks resulted in a new odds favorite, but does Bryce Young stand unopposed following Week 5?

It was billed as the game where Matt Corral could seal an early advantage in the race for the Heisman and QB1 of the 2022 NFL Draft. However, when the sun set on Bryant-Denny Stadium on Saturday night, Alabama quarterback Bryce Young was left standing as the Heisman Trophy favorite, per DraftKings odds. Has Young etched his name on the trophy? Or did Week 5 of the college football season see more contenders emerge than before?

Calling Saturday night’s clash between Ole Miss and Alabama “a battle” is a little misleading. We’d expected a slugfest between two of the early odds leaders for the Heisman Trophy, an all-out offensive feast with Bryce Young and Matt Corral going toe to toe. “Get your popcorn ready,” Lane Kiffin proudly pronounced to the press before scuttling away to the sideline, the epitome of a pre-game mic drop.

In reality, we got a consummate performance in all phases of the game from Nick Saban’s Alabama team. When Corral found the end zone midway through the third quarter, the Crimson Tide were already up 35-0. Two fourth-quarter touchdowns were mere window dressing, the 42-21 scoreline flattering to deceive.

Statistically, there was little to separate the odds from the two Heisman Trophy front-runners. Both Corral and Young completed over 70% of their passes, and both threw for under 250 yards. Yet, there was a feeling of ease with how the Alabama quarterback continues to surgically dissect the opposition with a poise and patience belying his relative inexperience.

Of course, it helps when you have the nation’s premier offensive tackle keeping you clean in the pocket. It makes your job easier when you can rely on a dominant defense. Even running back Brian Robinson Jr. joined in the Heisman Trophy conversation, his odds slashed by DraftKings to +3500 after a 171-yard and 4-touchdown rushing performance.

However, at odds of +120, Young comes out of the weekend as the Heisman Trophy favorite. To steal a quote from The Bible, admittedly via television’s The Leftovers:

“But he stands alone, and who can oppose him? He does whatever he pleases. He carries out his decree against me, and many such plans he has in store.”

Can Kenny Pickett kick it as a Heisman contender? Yes, he can

While Young appears to stand alone in the race for the Heisman Trophy, some can oppose him. One defeat does not make a campaign, and Corral is still the second favorite in the latest Heisman Trophy odds. Playing down the stretch often defines the winner, and there are big games to come for the Rebels.

One of those is against the Liberty Flames and Malik Willis in early November. Despite leading Liberty to a 36-12 win over UAB, with 144 rushing yards and 2 scores to go with 287 yards and a passing touchdown, Willis saw his Heisman Trophy odds jump out to +4000. Be under no illusion — he is still a contender.

However, if you’re looking for someone to oppose Young, may I point your peepers towards Pittsburgh Panthers passer Kenny Pickett. The ascending quarterback in the 2022 NFL Draft class threw for 389 yards and 4 touchdowns as Pittsburgh pounded Georgia Tech in a 52-21 routing.

Pickett performing at a phenomenal level for Pitt

With the 4 scores, Pickett has more touchdowns through five games than he has in any previous full season. His 19 passing touchdowns are second in the nation behind SMU QB Tanner Mordecai. Furthermore, Pickett sits in the top 10 nationally for yards per attempt and yards per game while throwing just 1 interception.

In a football landscape that demands a quarterback be able to impact the game on the ground too, Pickett also has the goods. His statistics won’t wow in the same way as Willis or Corral, but he can nonetheless alter the game with his legs.

As Pitt emerges as a contender in the ACC, Pickett is ascending as a Heisman Trophy candidate. As a result, DraftKings has shortened his odds to +6000 following Week 5.

Another quarterback contender having their Heisman Trophy odds shortened is Desmond Ridder. The Cincinnati QB is available at +1000 following the Bearcats’ historic win over Notre Dame.

Running backs do matter in the Heisman Trophy odds

While traditionally viewed as a quarterback award, the latest Heisman Trophy odds following Week 5 show that running backs do matter. Michigan State continues to surprise in the Big Ten, and their success can be attributed to running back Kenneth Walker III.

The junior rusher, who transferred from Wake Forest in the spring, racked up 126 yards and 3 touchdowns in Saturday’s win over Western Kentucky. Coming into the game, Walker led the nation in yards per game and now has 8 rushing scores on the season.

With odds of +3000, Walker is currently the first non-quarterback in the top contenders for the Heisman Trophy.

However, you could argue that no running back is more pivotal to their team’s success than Bijan Robinson. When Robinson is the focus of the offense, the Texas Longhorns look like a completely different team. The sophomore sensation added 216 yards and 3 scores to his season total. If you needed a statistical demonstration of his influence on the offense, quarterback Casey Thompson threw for just 142 yards.

You can get odds of +3500 on Robinson to become the first Heisman Trophy-winning running back since Derrick Henry. As the season evolves and Robinson continues to dominate, they may be the best odds that you get on him.

However, for now, Alabama quarterback Young stands unopposed as odds leader for the Heisman Trophy.