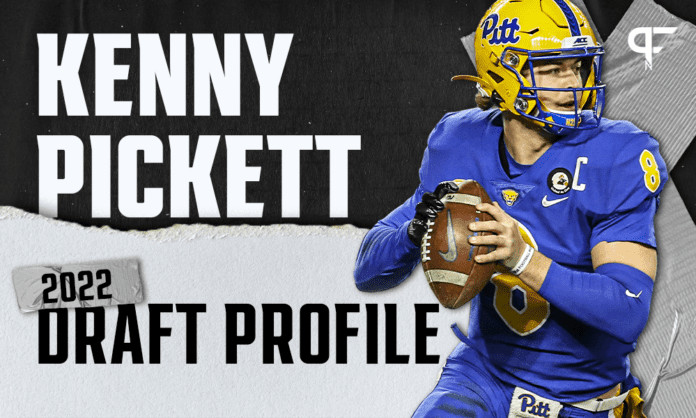 He's always had the talent to break out. Can Pitt QB Kenny Pickett boost his NFL Draft scouting report with a strong 2021 season?

He may have an unfortunate surname for a quarterback, but make no mistake: Pitt QB Kenny Pickett is a legitimate 2022 NFL Draft prospect, and his scouting report boasts a kind of upside that relatively few quarterbacks provide. How high is Pickett’s ceiling, and what does he need to do to reach it in 2021?

Pickett has a wealth of experience on the college football stage — more than most quarterbacks that will suit up this year. He was regarded as a serious 2021 NFL Draft prospect in 2020 but chose to return to school for his redshirt-senior season. He’s amassed 7,984 passing yards and 568 rushing yards and should break 10,000 yards from scrimmage this year.

Pickett has long been a mainstay for the Pittsburgh Panthers and ACC football, in general. But at some point — as hard as it may be to admit — the Pickett experience will be gone from college football, and the Pitt QB will make the long-awaited leap to the NFL. We know how exciting Pickett can be as a college football signal-caller, but does he have the upside to earn the same opportunities at the professional level?

Let’s start with Pickett’s physical tools, where the Pitt QB is surprisingly well-equipped. Standing at 6’2″, 220 pounds, Pickett is a good athlete with a strong frame. With his mobility, he can sidestep rushers, escape the pocket, and produce on the ground. He also has elite competitive toughness. Pickett is clutch in crucial moments, and he plays through injuries, putting it all on the line each Saturday afternoon.

Even more so than Pickett’s athleticism, however, his arm demands attention. The Pitt QB has a crisp, compact, and efficient throwing motion, which easily generates velocity. With this velocity, Pickett leads receivers downfield and pushes the ball past defenders. He also fits the ball into tight spots and has the elasticity to adjust his trajectory and ball placement.

Going further with Pickett’s elasticity, he flashes the ability to adjust his arm angles on throws. Pickett also generates velocity off-platform and delivers accurate throws on the run. Even off his back foot, he creates impressive momentum. Furthermore, he can methodically place balls according to receiver leverage downfield. Pickett could be more consistent here, as we’ll get into, but the capability is undoubtedly there.

Pickett’s strong off-script profile is one of his most appealing features. But the Pitt QB has a degree of polish, which comes with experience. Pickett has exceptional mechanics in structure. He keeps his feet and shoulders squared toward his target, and he continually resets his base as he goes through his progressions. Pickett’s never idle on his feet, and he navigates the pocket well. He knows how to manipulate throwing lanes with his positioning.

Pickett is poised in the pocket — he stands tall and delivers strikes even amidst contact. He knows to turn his upper body before throwing to generate maximum hip torque, and he consistently steps into his throws to maximize momentum. Additionally, Pickett has a fairly good feel for pressure around the edge, and he’s proactive in evading and extending plays.

Mentally, Pickett shows promise. The Pitt QB flashes the ability to go through his progressions with pace. He sees the field well and attacks downfield with a gunslinger mentality once he identifies windows. Pickett is fearless and confident as a passer. He’s willing to test tight windows with his arm and isn’t scared by a lack of space. Moreover, he keeps his eyes downfield when going off-script, identifying open receivers quickly.

While Pickett has an array of positive physical and mental traits, there’s a general volatility in his game that must be ironed out in 2021. Mechanically, while Pickett is largely solid, he sometimes fades backward and throws off his back foot, causing passes to drop.

His stance can also be a bit too wide at times, sapping away his velocity. His footwork, while strong, can be inconsistent against pressure, and he occasionally fades backward when rolling out of the pocket.

Pickett’s fearlessness, while appealing, can sometimes be a double-edged sword. He takes many risks that he shouldn’t entertain. In the pocket, his desire to stand tough and keep his eyes ahead can lead to negative plays. Also, he doesn’t feel pressure up the middle well. As a passer, Pickett’s daring style can lead to opportunities for the defense. Several operational flaws contribute to this as well.

Pickett sometimes stares down his targets, keying in defenders to close on the ball. He could more consistently use his eyes to deceive defenders. Furthermore, he’s sometimes late to pull the trigger when receivers break.

Additionally, Pickett’s precision and ball placement can improve. He sometimes misses high when trying to force the ball ahead. While he has the capacity to adjust his ball placement, he must be more consistent here. He doesn’t always throw his receivers open, and he needs to work off leverage more effectively.

Among other things, Pickett doesn’t have top-end speed or agility, even if he is a good athlete. Additionally, the Pitt offense employs a lot of quick throws, sometimes limiting Pickett’s progression work.

Pickett’s relative lack of progression in college has diluted his stock somewhat. Nonetheless, the Pitt QB has undeniable potential. If he reaches his ceiling, Pickett could be a potential starter in the NFL. He’s a good athlete with a great arm, generates exceptional velocity both in structure and off-platform, and his competitive toughness can be contagious.

For Pickett, toning down his volatility will be key. The Pitt QB’s mental execution is still a work in progress, and he’ll need to be more consistently accurate. He can better utilize his eyes, and at times, his decision-making is somewhat reckless. Even so, Pickett has the physical traits to test the boundaries.

As of now, Pickett — who’ll be a 24-year-old rookie — is a solid developmental Day 3 pick, with the toughness and mechanical polish to be a valuable backup. But if he shows development in 2021, he has the upside to move up the board.

Pickett’s NFL Draft upside was first visible in high school when the future Pitt QB became one of the most productive passers in his area. Over the course of his career at Ocean Township High School in Oakhurst, New Jersey, Pickett amassed 4,670 passing yards and 43 passing touchdowns. He also earned 873 yards and 17 touchdowns on the ground.

With a 4.77 40-yard dash and a 34.6-inch vertical jump at around 6’2″, 193 pounds, Pickett became a coveted dual-threat quarterback. A three-star recruit, Pickett received scholarship offers from Iowa, Temple, Boston College, Buffalo, and Connecticut. But for Pickett, the opportunity to play for the Panthers was most enticing.

In 2017, Pat Narduzzi and the Panthers were faced with the task of replacing Nathan Peterman, who’d thrown 27 touchdowns and 7 interceptions the previous year. USC transfer Max Browne and Ben DiNucci traded off somewhat in the season’s early months, but true freshman Pickett got his chance in late November against the vaunted Miami Hurricanes. Pickett led the Panthers to a win in his first start, and from that point onward, he was entrenched in the starting role.

In 2018, Pickett started all 14 games, helping lead the Panthers to a Coastal Division title in the ACC. He picked up 1,969 yards, 12 touchdowns, and 6 interceptions with a 58.1% completion percentage. In 2019, Pickett reprised his role and took a slight step up. He missed one game due to injury but still started 12, earning 3,098 yards, 13 touchdowns, and 9 interceptions on a 61.6% completion rate.

2020 looked as though it was going to be a breakout year for Pickett. In fact, he started the season with four straight games above a 120 rating. However, three of his final five games fell below that mark — largely due to a Grade 3 high ankle sprain. Nevertheless, Pickett still saw a career high in rating, and his yards per attempt improved from 6.6 to 7.3. All told, Pickett amassed 2,408 yards, 13 scores, and 9 picks in nine games. He also added 8 touchdowns on the ground for a total of 21 trips to the end zone.

Pickett’s 2020 season is a story of disappointment on the surface — no doubt because of the lofty expectations that Pickett carried for himself. But it’s also a story of resilience. Pickett came back from that high ankle sprain — which traditionally takes at least six weeks to heal — in 26 days. Painstakingly, he gutted through the final four games and threw for 404 yards against Virginia Tech. He led Pittsburgh to a winning record, but more importantly for Pickett, he came back to his teammates.

At first, Pickett wasn’t going to come back in 2022. Yet, after getting fifth and sixth-round grades from evaluators, he decided he was better than that. Now, Pickett is hell-bent — not just on earning coveted success for his Pittsburgh team, but also on achieving the breakout season he’s sought for three years. And with that breakout season, Pickett might be able to prove his doubters wrong.