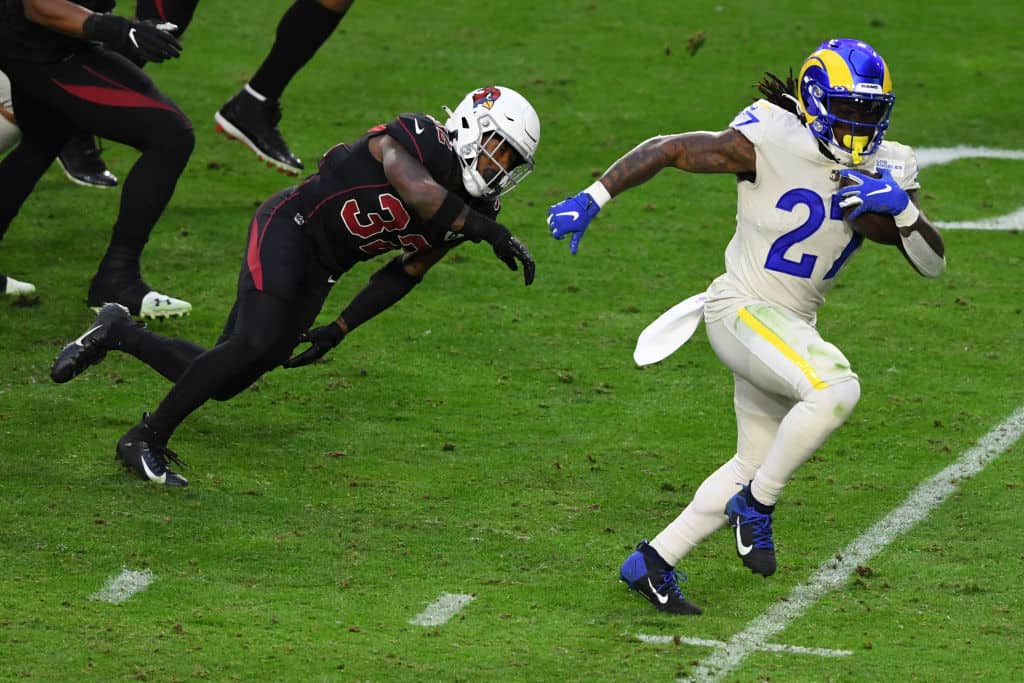 We’re nearing the home stretch of your fantasy football season. At this point, your hopes of a long-sought-after championship are likely somewhat contingent on the latest RB injuries in the Fantasy RB Week 14 Injury Report. For information on Rams RB Darrell Henderson, Raiders RB Josh Jacobs, Panthers RB Christian McCaffrey, and other relevant ball carriers check out our Week 14 report below!

These NFL Week 14 fantasy RB injury reports were last updated on December 11th. We will run another update each day of the week at 5:00 PM ET.

Is Josh Jacobs on track to return after a short absence from the lineup?

Sunday, December 13th: Josh Jacobs is active for the Las Vegas Raiders Week 14 matchup. However, he posted on Instagram that despite being active, he will be not playing in the matchup with the Indianapolis Colts.

Heading into Week 13, Josh Jacobs hadn’t missed a game all season. While his efficiency wasn’t great, his volume dictated that he remained a viable option for fantasy owners. But Jacobs was swept up in the latest batch of RB injuries; he didn’t practice in Week 13 after suffering an ankle injury and ended up sitting out the Raiders’ Week 13 game against the Jets.

Related | Josh Jacobs Injury Report: Will he play in Week 14?

Devontae Booker took the start in his place and logged 50 yards on 16 carries. Will Josh Jacobs be back next week to reprise his role?

Will Christian McCaffrey be available to provide a late-season boost?

For weeks, it’s been one of the biggest storylines surrounding RB injuries: Will Christian McCaffrey finally return to the field this week? At long last, the answer to that question might be “yes.” McCaffrey has only played three games this year, but he could redeem himself with a strong performance as a savior in the fantasy football playoffs.

Will Joe Mixon come off of injured reserve in time to assist your playoff run?

Wednesday, December 9th: Mixon won’t return to practice this week and is still on IR, Geoff Hobson of the Bengals’ official site reports.

Related | Joe Mixon Injury Update: Will he play in Week 14?

At one point, Bengals head coach Zac Taylor had stated that Joe Mixon was considered week-to-week with a foot injury. Then Mixon missed a few more weeks. Then the Bengals placed him on injured reserve. That was in Week 11, and now, heading into Week 14, Mixon’s injury timeline may be closing. This is the earliest that Cincinnati can remove him from injured reserve, but are the indications pointing that way?

Clyde Edwards-Helaire was questionable heading into the Chiefs’ Sunday night matchup against the Denver Broncos. Edwards-Helaire suffered from a stomach illness throughout the week. The rookie ended up being active for the game, but he didn’t log any snaps. Andy Reid later said that the virus had taken a slight toll on Edwards-Helaire’s readiness, specifically his weight.

Veteran runner Frank Gore sustained a concussion in New York’s 28-31 loss to the Raiders on Sunday. He did not return to the game after he was evaluated. Gore will have to clear concussion protocol before he can get back to the action.

Friday, December 11th: Ahmed is ruled out for Sunday’s game against the Chiefs, Cameron Wolfe of ESPN.com reports.

Dolphins rookie Salvon Ahmed missed his second consecutive game on Sunday, missing out on an opportunity to produce against the Bengals defense. Myles Gaskin performed well in Ahmed’s absence. Thus, Ahmed may return to more of a rotational role when he returns to full health.

Vikings backup running back Alexander Mattison was ruled out for Sunday’s game against the Jaguars with an illness. It’s unknown if Mattison will be ready to take his rotational reps back in Week 14. Dalvin Cook expectedly drew the majority of the workload in Mattison’s absence, logging 120 yards on 32 carries.

D’Andre Swift missed his third straight game in Week 14, listed with an illness ahead of the action. That illness comes off the heels of a concussion that lingered past the length of the protocol. Between that and his injury, it’s hard to tell when Swift will be back to full health. Darrell Bevell made clear that the Lions view Swift as day-to-day moving forward.

Devonta Freeman is at the tail end of his three-week period on injured reserve. However, his pathway to a return is obscured. Freeman was also placed on the team’s outbreak list just two days ago on top of hamstring and ankle injuries. Freeman first has to clear outbreak protocols. Even then, breakout running back Wayne Gallman may have usurped his starting spot.