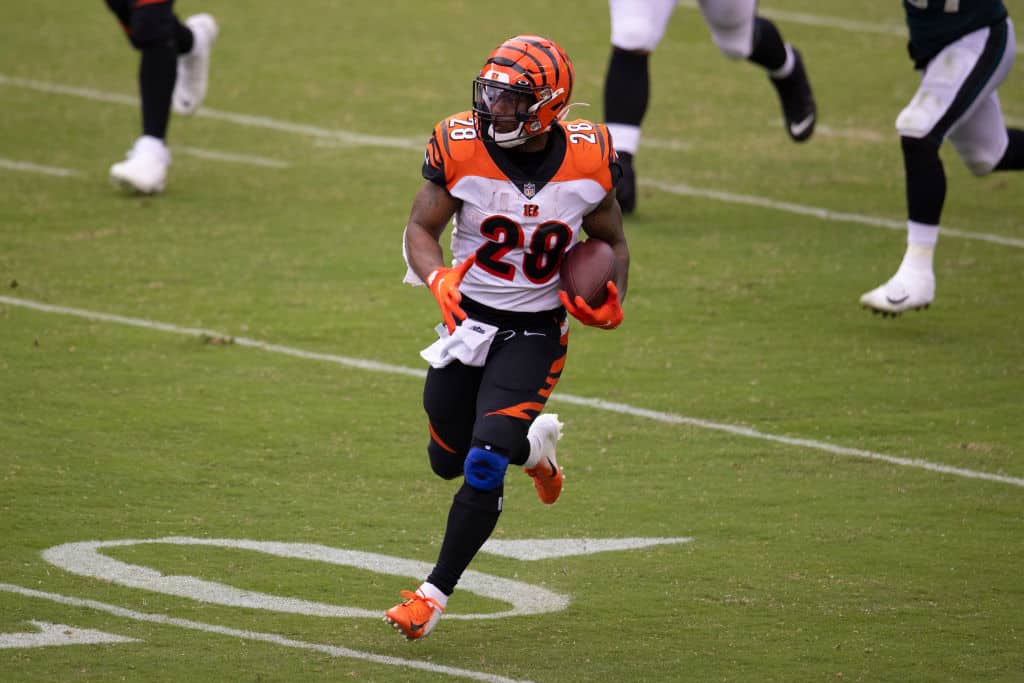 PHILADELPHIA, PA - SEPTEMBER 27: Joe Mixon #28 of the Cincinnati Bengals runs the ball against the Philadelphia Eagles at Lincoln Financial Field on September 27, 2020 in Philadelphia, Pennsylvania. (Photo by Mitchell Leff/Getty Images)
What's in this article? Click to show
Head coach Zac Taylor ruled out Joe Mixon through injury on Wednesday
Giovani Bernard will serve as the lead back if Joe Mixon will not play due to his injury
Without Joe Mixon, Giovani Bernard comes in as a solid RB2 against a porous Cobowys run defense
Want more fantasy football analysis and news?

Hopefully, with the fantasy football playoffs about to kick off, your team is at full strength – especially for players taken early in drafts, like Cincinnati Bengals running back Joe Mixon. Having not played since Week 6 against the Indianapolis Colts, recent news from head coach Zac Taylor offered some optimism that his star RB could be back on Sunday. However, on Wednesday, it appeared as though Joe Mixon’s foot injury will prevent him from being able to play in what could be a fantastic matchup against the Dallas Cowboys.

In a December 2nd interview on the team’s official site, when asked if he could envision RB Joe Mixon playing this year, head coach Zac Taylor said, “Absolutely I could.”

“We’re is in the process of letting that foot heal. He’s got two more weeks on injured reserve. We just continue to evaluate where he’s after that IR period.”

While this could be coach speak, there is still a shot the team chooses to run Mixon back out there even if they are playing for nothing at this point. The Bengals currently sit at 2-9-1  and are in last place in the hotly-contested AFC North.

Joe Mixon suffered the foot injury in Week 6 against the Colts and hasn’t played since. In six games this season, Mixon has 428 yards and three touchdowns on the ground while adding 138 yards and another score through the air.

On Wednesday afternoon, Ben Baby of ESPN reported that per Zac Taylor, Joe Mixon would not be playing in Week 14.

The frustrating part is the team waiting until Week 11 to place him on the IR. Maybe the team thought he could have come back sooner. But if Joe Mixon’s foot has taken this much longer than the initial prognosis without a setback, it’s hard to see how or why they would put him back on the field.

When can Joe Mixon return from IR?

After being placed on the IR in Week 11, if cleared from his injury, Joe Mixon could have returned this week. A player only has to stay on the injured reserve for three weeks.

Taylor was always rather safe and non-committal when discussing Joe Mixon and his injury, which is to be expected. If we see Joe Mixon at practice next week, then there is a chance of a Week 15 return. It’s just hard to see the benefit from a team perspective after they just lost Joe Burrow for what could be the entire 2021 season with a devastating knee injury.

In August, Mixon agreed to a four-year contract extension worth $48 million. Mixon rushed for over 1,000 yards in each of the past two seasons and was seventh in the NFL in rushing.

Giovani Bernard has served as the lead back the entire time that Joe Mixon has been out. However, it hasn’t been the best in terms of fantasy results.

Directly following Joe Mixon’s injury, Bernard put up his best games of the season. In Week 7, he had 18 touches for 96 combined yards and one touchdown. Bernard then followed it in Week 8 with 78 yards on 18 touches with two touchdowns. During these two weeks, Bernard was the RB3, averaging 21.7 PPR points per game.

Since the bye week, things have not been so smooth. Bernard has failed to top 60 total yards in any game or score a touchdown. Though I don’t think this should be a surprise, as all but one of these games (Week 10) has been played since Burrow’s injury.

In fairness, the Bengals offensive line is terrible, and the last four matchups have not been kind. Their last four games have been against the Pittsburgh Steelers, Washington Football Team, New York Giants, and Miami Dolphins. Pittsburgh, New York, and Washington have yet to allow 1,000 rushing yards to RBs on the season. They were able to win at the line of scrimmage, and Bernard never got a chance to get any momentum.

On Sunday, this pattern changes a bit as they take on the Dallas Cowboys.

Without Joe Mixon, Giovani Bernard comes in as a solid RB2 against a porous Cobowys run defense

Over the last three weeks, the Dallas Cowboys have given up over 200 yards per game on the ground. On Tuesday, they gave up 294 to the Baltimore Ravens alone. They have faced the most rushing attempts from RBs (322). They also allow a staggering 5.08 yards per carry (31st) and 136.5 yards to the position each week. Throw in the 6.9 fantasy points through the air, and their 25.74 PPR points per game rank 27th in the NFL.

The passing side is the only element the Cowboys have been able to stop this season. They are one of just three teams to not allow a receiving touchdown to a running back and have faced the fewest targets (58).

The Bengals will never be mistaken for a high-scoring team, especially with Burrow and Joe Mixon out. Since his injury, Cincinnati has yet to score 17 or more points. They average 317.5 yards, with 85.5 of those on the ground.

Bernard has seen at least 10 touches each game since Week 6 and has seen at least 14 opportunities in five of his last seven. Yes, some work will go to Samaje Perine but expect Bernard to see the bulk. I expect Joe Mixon’s injury will keep him out this week, leaving Bernard in a solid spot to produce as a mid-range RB2 with a low-end RB1 ceiling if he can get into the end zone.