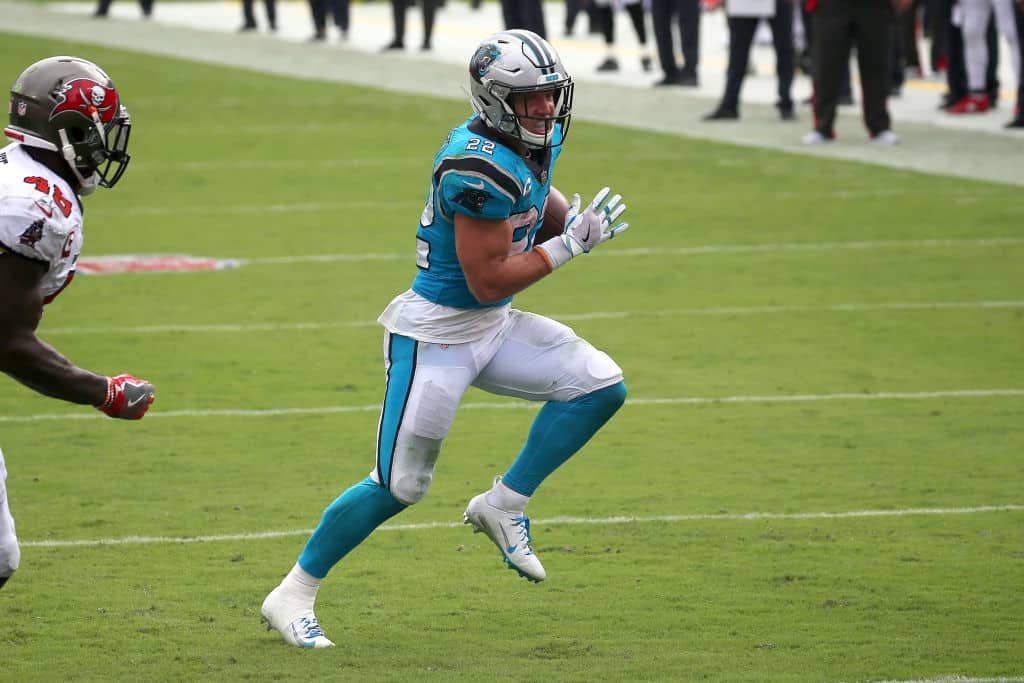 TAMPA, FL - SEP 20: Christian McCaffrey (22) of the Panthers runs the ball into the end zone for the score but after the play, McCaffrey limps off the field and does not return during the regular season game between the Carolina Panthers and the Tampa Bay Buccaneers on September 20, 2020 at Raymond James Stadium in Tampa, Florida. (Photo by Cliff Welch/Icon Sportswire via Getty Images)
What's in this article? Click to show
Christian McCaffrey’s practice status
Carolina is in the middle of dealing with an outbreak heading into Week 14
If Christian McCaffrey is out due to injury again, Mike Davis will continue to serve as the team’s RB1
Want more fantasy football analysis and news?

It’s Week 14, and there is one question on fantasy football managers’ minds. Is this the week that Christian McCaffrey will return from injury? Selected as the 1.01 and playing in only three games, getting Christian McCaffrey back could single-handily secure you a championship.

Joe Person of The Athletic reported that head coach Matt Rhule is dealing with a tweaked thigh.

While McCaffrey was limited with his still recovering shoulder injury, he tweaked his thigh during last week’s practices. On Wednesday, Rhule said it “tightened up today.”

If you’ll excuse me, I need to go drown my sorrows in a bucket of ice cream while sobbing uncontrollably.

With playoffs starting this week, the latest news is not a welcome sign

Week 14, for 99% of leagues, signifies the opening week of the fantasy playoffs. If you had the 1.01 and managed to secure a first-round bye, congratulations. That might be the best week off you could have hoped for right now.

For the rest of us, it’s time to be concerned about your fantasy team’s future.

Coming into their Week 13 bye, we all hoped that Christian McCaffrey would return this week. To know he suffered a new injury during an “off week” is less than ideal. Especially given the 180-degree turn that Rhule has made since Monday.

When asked on Monday if he felt Christian McCaffrey would return on Sunday, Rhule said, ‘’There’s nothing to make me think he’s not.” This report coming from David Newton of ESPN created a false sense of security.

Could McCaffrey be rusty if he suits up?

McCaffrey has played just three games this season in Weeks 1, 2, and 9. He missed Weeks 3-8 with an ankle injury and returned in Week 9 only to injure his shoulder during that game. He’s been out every game since.

When on the field, McCaffrey has averaged 30.1 PPR points in his three games. Each time finishing as a top-five fantasy option. He rushed 59 times for 225 yards and scored five touchdowns. McCaffey also caught 17 of his 19 targets for 149 yards while adding one touchdown through the air.

It’s worth noting that Christian McCaffrey’s return has not been ruled out. But once again, we will have to monitor this as the week progresses.

On Monday, the Panthers placed eight players on the NFL’s reserve list. It is not known which players tested positive or were high-risk contacts.

Given the NFL’s protocols, it is uncertain if these players will be available to play on Sunday. Only further testing and time will determine who can and can not play against the Denver Broncos.

If Christian McCaffrey is out due to injury again, Mike Davis will continue to serve as the team’s RB1

For those who spent their early-season FAAB on Mike Davis, that could not have gone better. Davis is currently the RB10 in PPR formats, averaging 13.6 points per game. On his 178 touches in 2020, Davis has 833 total yards and five touchdowns. In the nine games that Christian McCaffrey has missed due to injury, Davis has seen at least five targets in six games.

In a vacuum, what type of matchup does the Panthers RBs have Week 14 vs. the Denver Broncos?

The Week 14 matchup against the Denver Broncos is a favorable one. While they are 15th in fantasy points allowed to RBs (22.86), don’t let that scare you off.

From Week 1 through Week 6, the Denver Broncos only gave up one touchdown on the ground while averaging 63.5 rushing yards to the other team. However, since Week 7, the Broncos have given up eight rushing touchdowns and allowed an average of 129 rushing yards against them.

Over the last three weeks, they have allowed the fourth-most rushing yards per game (139.7) in the NFL.

If we see Christian McCaffrey shake off his injury and will return, he is a locked-in RB1 that can finish as the RB1. If not, then Mike Davis comes in as a solid RB2 with upside. Keep plugging him in while you can, because once McCaffrey comes back, his workload and fantasy value are gone.

In this article:Christian McCaffrey, mike davis