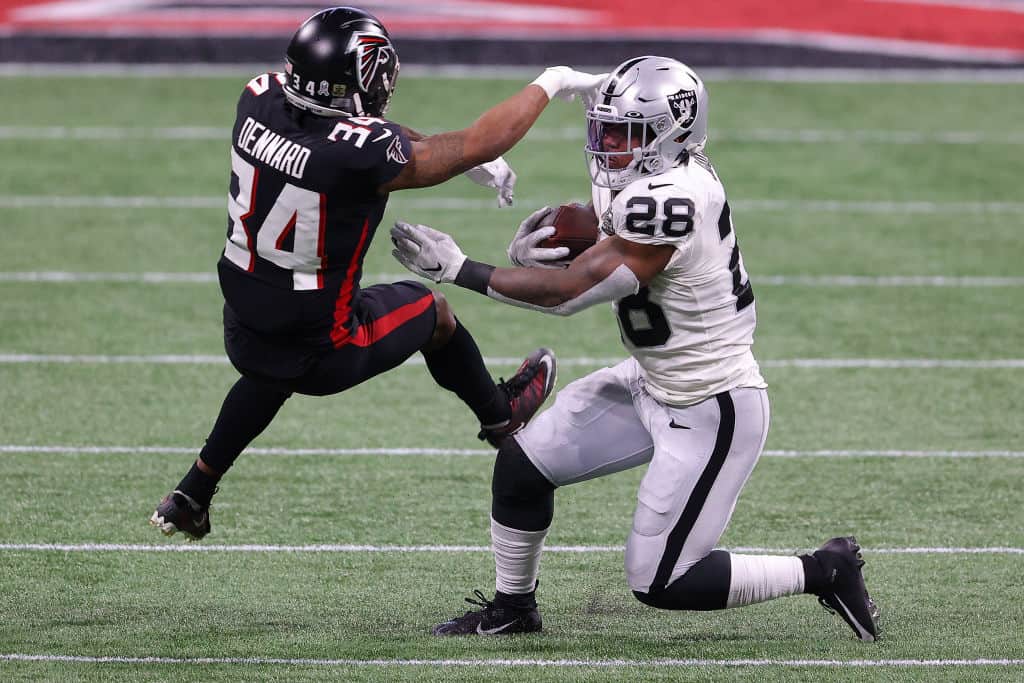 ATLANTA, GEORGIA - NOVEMBER 29: Josh Jacobs #28 of the Las Vegas Raiders rushes with the ball against Darqueze Dennard #34 of the Atlanta Falcons at Mercedes-Benz Stadium on November 29, 2020 in Atlanta, Georgia. Jacobs was penalized for lower his helmet on the play. (Photo by Kevin C. Cox/Getty Images)
What's in this article? Click to show
Head coach Jon Gruden “not confident” Josh Jacobs will play in Week 14
Devontae Booker underwhelmed in fantasy while filling in for Josh Jacobs
If Josh Jacobs does not play, Devontae Booker could struggle again this week
Want more fantasy football analysis and news?

Week 14 in the NFL means one thing, the start of the fantasy football playoffs. While we want to all enter with full rosters, fantasy managers who have Las Vegas Raiders RB Josh Jacobs are left questioning his status. Will Josh Jacobs play against the Indianapolis Colts on Sunday, or will Devontae Booker serve as the lead again?

Vic Taufur of The Athletic reported that Raiders head coach Jon Gruden is not confident that RB Josh Jacobs will suit up on Sunday.

Well, that isn’t what fantasy managers wanted to hear. It’s still early, but it sounds as if Jacobs is headed for another full week of DNPs. Jacobs failed to practice last week and never seemed close to playing.

Josh Jacobs was injured on a play late in the third quarter of Week 12 and was seen grabbing his ankle in obvious pain. Before his injury, Jacobs had only 27 rushing yards on seven carries along with three receptions for 17 receiving yards.

Prior to this injury, Josh Jacobs had managed to stay healthy this season after missing three games last season. In 11 games, he had totaled 782 rushing yards on 206 carries and nine rushing touchdowns while adding 27 receptions on 34 targets for 175 receiving yards.

Practice reports on Wednesday will be a huge determination in what to expect out of Josh Jacobs. If he is not at least a limited participant, his shot at playing is dim. After missing a full week, the team needs to see some progress in his rehab.

If you are in the fantasy mix this week, you need to be okay with them taking it slow with Josh Jacobs. The last thing you want to see is the team rushes him back, only to reinjure himself and be placed on the IR. Patience is in the best interest of the team and the hopes of him suiting up this Sunday.

Devontae Booker underwhelmed in fantasy while filling in for Josh Jacobs

I am not an “I told you so” kind of guy, but I was not surprised Booker struggled. If there was one part of the New York Jets team that is decent, it is their run defense. I expected Booker to see between 15 to 20 touches but not be overly efficient and need a touchdown to have a solid fantasy day.

Booker totaled 50 yards on 16 carries against the Jets and averaged 3.1 yards per carry. The touchdown never came. He also caught one pass for one yard while playing on 42% of the offensive snaps.

Jalen Richard and Theo Riddick combined to see seven carries for 17 yards, with nine yards through the air on two receptions. The entire Raiders RB committee never got in the flow of the game.

What I think most people did not see coming was Derek Carr needing to throw the ball nearly 50 times in order to beat the winless Jets. It took the 47th and final pass to secure the win. Thanks in large part to now-former DC Greg Williams calling Cover Zero to allow this to happen.

Since 2006, when they first started keeping track, this was the first time any team in a hail mary situation called this defense, according to ESPN Stats & Info.

If this were a “normal” game against the Jets, perhaps Booker could have had a better day against them by virtue of having more volume. He finished the game with 6.1 PPR points, the RB36 on the week.

If Josh Jacobs does not play, Devontae Booker could struggle again this week

The box score may not reflect the Colts’ defensive talent

The Indianapolis Colts give up the 13th-most fantasy points to opposing running backs at 22.28 PPR points. They also are 9th in yards allowed on the season at 974. But that does not paint the full story.

We need to look at Week 12 when the Colts played the Tennessee Titans. They were without DT DeForest Buckner, who was placed on the NFL’s reserve list in that game.

Derrick Henry proceeded to run all over them, going for 178 yards on 22 carries with three touchdowns. He ended the day with a ridiculous 38.5 PPR points. In total, they allowed 226 yards on 39 carries for 45.90 PPR points, over double their average.

How have the Colts fared without the anomaly?

Remove that outlier game from the data set, and they give up 68 yards on the ground and 19.94 PPR points. King Henry accounted for nearly 20% of the points and yardage they have allowed on the season.

Now they face a second-string running back in Devontae Booker, who just averaged 3.1 yards against the Jets. How do you think this is going to go? Likely, not so well.

If you don’t have a better option, Devontae Booker will be a high-end RB2 but with the floor of a low-RB3. I would hesitate before plugging him into your lineups when every game is “win or go home.” The best thing that can happen is Josh Jacobs will play on Sunday and be a mid-RB2. The concern will be a potential reinjury, but sometimes you have to ride it out with the one that brought you to the dance.