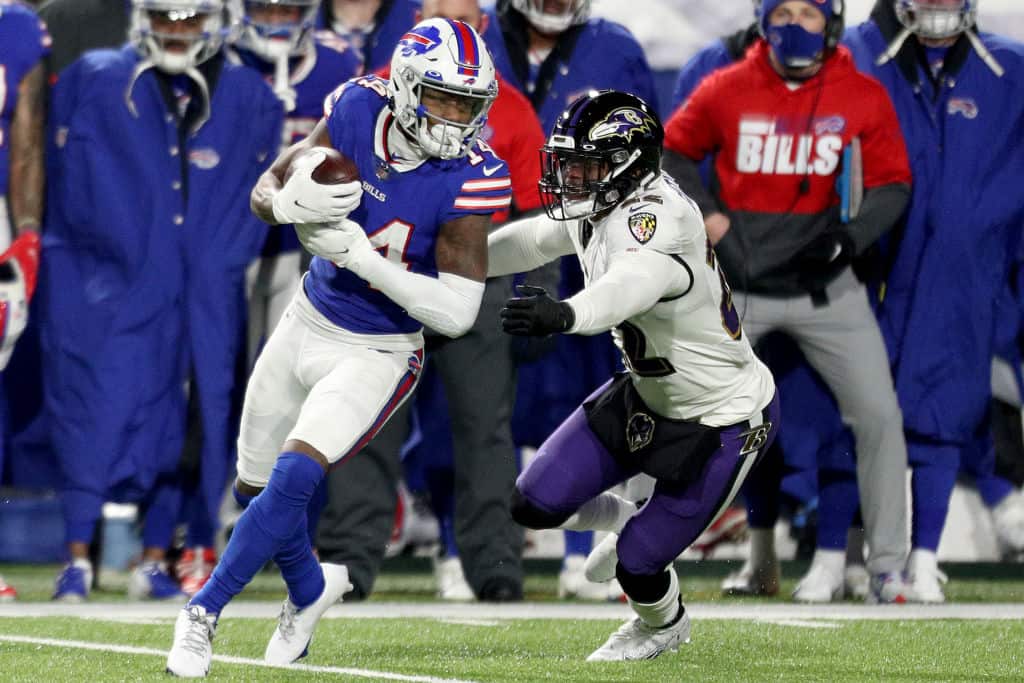 After 19 weeks of games, the 2020-2021 NFL Playoffs are down to the final four teams. Gaining in popularity in recent years is playoff fantasy football, an easy way to forget about what your other teams did for one final shot at redemption. With the Conference Championships kicking off on Saturday, here are the fantasy football playoff rankings.

Even when not having his best performance, Josh Allen still delivers in fantasy and, of the remaining QBs, has the best rushing upside. Allen went 23 of 37 for 206 yards and a touchdown and added 7 rushes for 3 yards in Saturday’s win over the Ravens. The Chiefs’ defense is no slouch, though. Only three quarterbacks have passed for over 300 yards against them all season. However, they are bottom-five in points allowed on the ground, which Allen could exploit.

So far, so good for Patrick Mahomes after suffering a scary injury in last week’s game. According to ESPN’s Adam Shefter, Mahomes practiced on both Tuesday and Wednesday and cleared some hurdles. More progress is needed, but it is a good sign that he is back on the field.

The other concern will be his mobility as he deals with a foot injury. He comes in as the second-ranked QB in the Conference Championship playoff fantasy rankings but could end up missing the game entirely.

Which veteran QB will win the NFC Championship Game?

Aaron Rodgers is putting on a clinic and did it again against the best defense in the NFL last week. Rodgers went 23 of 36 for 296 yards and 2 touchdowns and added a rushing touchdown in Saturday’s win over the Rams. He led the Packers to an early lead and never looked back. Tampa Bay has been middle of the road to QBs in fantasy, allowing 18.34 points per game (18th).

Tom Brady did what he needed to do in last week’s win, going 18 of 33 for 199 yards and 2 touchdowns, including a one-yard rushing score. While New Orleans had a good defense, Green Bay’s defense has been even better. They are 5th in points allowed to QBs (16.1) and give up on average only 204.8 passing yards per game.

Aaron Jones continues to do it all for the Packers, even with A.J. Dillon and Jamaal Williams seeing more snaps. Jones rushed 14 times for 99 yards and a touchdown and added a 14-yard reception last week. 60 of his yards came on a single run early in the second half. Tampa Bay was formidable against the run, allowing only 20.21 points to the position.

Ronald Jones made it through the game with no setbacks to his quad and should resume his role as the Buccaneers’ leading ball carrier. While seeing fewer carries than Fournette (13 to 12), he was only one yard behind at 62 and scored a touchdown.

Related | NFL Playoff Picks, Predictions, & Best Bets Against the Spread for the Conference Championship Round

Having not played since Week 15, Clyde Edwards-Helaire should be good to go this week after practicing on Wednesday. If Mahomes struggles to move around, or it is the Chad Henne show, expect a heavy dose of Edwards-Helaire.

Fournette saw the majority of touches last week (22-13) and converted them into 107 total yards. Likely to split carries, Fournette will still be the team’s passing game option against a Packers defense that allowed the third-most points per game through the air to RBs at 12.28.

It’s hard to have much confidence in Devin Singletary. He had 7 rushing attempts for 25 yards and added 3 receptions for 12 yards last week in the win over the Ravens. Even with Zack Moss done for the season, Singletary can’t be the difference-maker his believers thought he could be when drafted.

Even when going against one of the NFL’s shutdown corners, Davante Adams made him look foolish at times. Adams had 9 receptions for 66 yards and a touchdown in Saturday’s win over the Rams. In fairness, holding Adams to 9 catches might be about all you can hope for this season.

Bills WR Stefon Diggs had 8 receptions for 106 yards and a touchdown in their Divisional Round win last week. The connection between Diggs and Allen has been incredible to watch this year. In his two playoff games, Diggs has 14 receptions for 234 yards and 2 touchdowns.

As Patrick Mahomes goes, so does Tyreek Hill. He caught 8 of 10 targets for 110 receiving yards and added 9 rushing yards. If Mahomes is active, Hill could have a blow-up game like normal. Last week marked his second 100-yard playoff performance of his career, hence why he’s so high in these fantasy playoff rankings.

Both Chris Godwin and Mike Evans can be interchanged. Godwin is likely to see the higher target share, but Evans tends to do more with his opportunities. Given Evans is likely to see Jaire Alexander, Godwin gets the bump in the head-to-head with his teammate.

Other wide receivers to consider this week in DFS lineups

The tight end rankings, for both fantasy and the NFL, playoffs or not, start with Travis Kelce. In last week’s win, Kelce put on a route-running clinic catching 8 of 11 targets for 109 receiving yards and a touchdown. Buffalo gave up the fifth-most fantasy points to tight ends in 2020 at 14.83 per game.

After finishing as the TE3 and dispelling myths that Rodgers doesn’t involve tight ends, Robert Tonyan had a solid performance. He caught 4 passes for 60 yards and will be a red zone threat against the Buccaneers.

Gronkowski has seen his role shift a bit in the playoffs. Being asked to stay back and block has cost him opportunities. Gronkowski caught 1 of 5 targets for 14 yards in the Division Round and saw only one in the game against the Washington Football Team.

Even in the NFL’s Conference Championship Round of the playoffs, there is a tier drop at tight end

TE Cameron Brate hauled in 4 of 5 targets for 50 yards last week after catching 4 passes for 80 yards the week prior. If the plan is to keep Gronkowski inline to block once again, Brate should lead the position in targets.

Dawson Knox caught both of his targets for 18 yards last week but continues to be a touchdown-dependent fantasy asset.