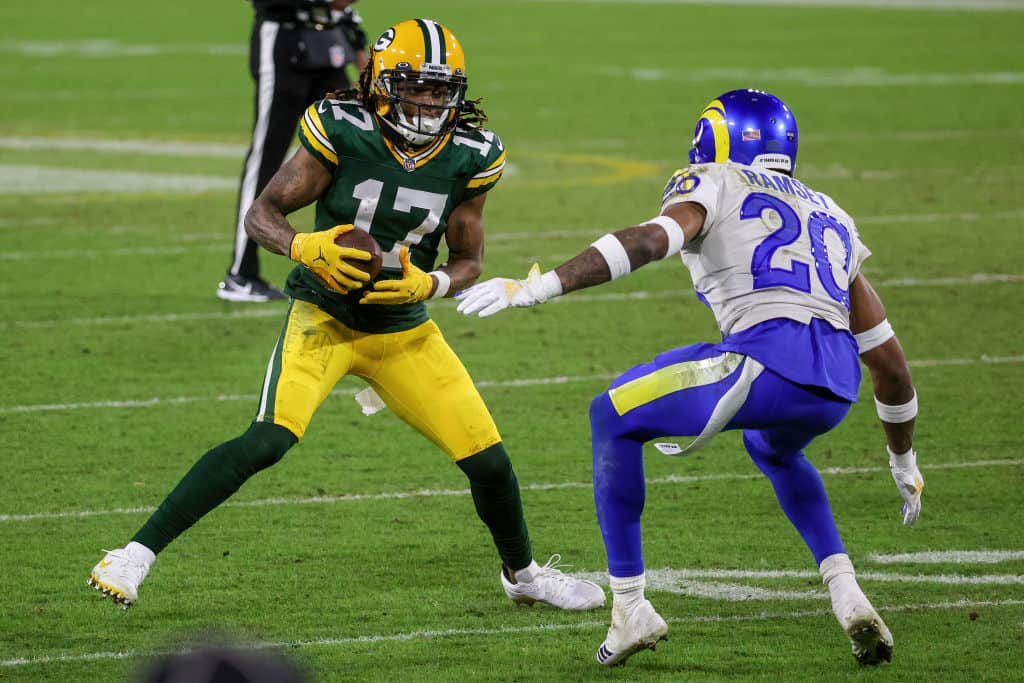 GREEN BAY, WISCONSIN - JANUARY 16: Davante Adams #17 of the Green Bay Packers runs with the ball while being chased by Jalen Ramsey #20 of the Los Angeles Rams in the fourth quarter during the NFC Divisional Playoff game at Lambeau Field on January 16, 2021 in Green Bay, Wisconsin. (Photo by Dylan Buell/Getty Images)
What's in this article? Click to show
NFL Playoff Predictions and Best Bets: NFC Championship
NFL Conference Championship Round Picks and Predictions: AFC Championship
Want more NFL news and analysis?

The Divisional Round saw two of the greatest all-time quarterbacks face off potentially for the last time. Tom Brady made it to his 14th Conference Championship Round game. It could have also been the final time we saw Drew Brees take the field. Our NFL betting team looks at the Conference Championship Round betting lines and playoff best bets in our next round of predictions and make our picks with only four teams remaining.

The Buccaneers have really turned a corner in the last month. After a bad stretch that had them sitting at 7-5, Tampa Bay looks like the team everyone expected to see when Tom Brady announced he was heading south. The one thing that Tampa Bay has in their favor is that both sides of the ball can rely on each other to make plays.

While the offense was struggling, the defense was forcing three turnovers in the second half. The Buccaneers had four takeaways against the Saints, three of which ended up with the Buccaneers taking over in New Orleans territory and leading to 21 points off turnovers.

That isn’t to say the defense is perfect, but when they have had an off day, Tom Brady has shown that he and the offense can put the team on their backs to win games as they did in their early-season shootout win over the Chargers.

This roster has high-level talent throughout, and they have come to life at the perfect time. The offense needs to be a little more consistent in establishing long drives, though. However, with the GOAT in No. 12 under center, you can always expect something fascinating to happen, especially in this Conference Championship Round game.

Speaking of fascinating players who wear No. 12, enter Aaron Rodgers. The Packers’ signal-caller seems like he is on his way to winning his third MVP after throwing 48 touchdowns to just 5 interceptions and starting the playoffs strong with a Divisional Round win over the Los Angeles Rams.

Although Green Bay got scrutiny for not selecting a receiver in the 2020 NFL Draft, the receivers on the roster stepped up when they needed to make a play.

It is apparent that Davante Adams is spectacular, and his 18 touchdowns showed that. Yet, several others played their roles in complementing fashion. Marquez Valdes-Scantling and Allen Lazard each had their moments where they were called upon and answered. Also, tight end Robert Tunyan made his mark as an impact player in the passing game throughout the season. We also can’t forget about Aaron Jones, who had a great game against the Rams, and Jamaal Williams in the backfield.

While Rodgers and the offense are the focal points of the Packers’ success, another man who deserves credit is Jaire Alexander. The shutdown corner was targeted three times in the Divisional Round, where he allowed one catch for negative yards. Plus, Preston and Za’Darius Smith off the edge are both forces to be reckoned with.

While both are generational talents, this feels like Aaron Rodgers’ year. The Packers faced ample turmoil since the NFL Draft last April. Through all the chaos, Rodgers has had arguably the best year of his storied career — it’s his time. We start our 2020-2021 NFL Playoffs best bets and picks with the Conference Championship Round betting lines by having the Packers advance to their first Super Bowl in a decade.

The city of Buffalo and Bills Mafia feel a high that they haven’t felt in over 25 years; their team is in the AFC Championship game. The Bills defense held the Ravens out of the end zone and capped off their 17-3 victory with a 101-yard interception returned by cornerback Taron Johnson for a touchdown.

Buffalo’s offense that catalyzed the team to their first division title in over two decades. The defense has come into their own down the stretch, though. Much of that has to do with getting healthy at the perfect time. Linebackers Tremaine Edmunds and Matt Milano each missed time with injury. They came back and were pivotal figures in the Bills’ two playoff wins.

That’s not to say the offense has been bad, just a little off. Josh Allen and Stefon Diggs were up to their usual tactics this postseason, especially in the Wild Card win over the Colts, connecting for a touchdown.

The Bills have found that balance of great offense and lockdown defense at the most opportune time, and they will be a handful for the Chiefs this Sunday.

What about Patrick Mahomes?

Kansas City defeated the Browns to go to the Conference Championship Round in a game that was closer than expected. The underlying story is Patrick Mahomes’ health after he suffered a concussion in Kansas City’s win. Andy Reid says that the reigning Super Bowl MVP was feeling good after the game, which is excellent news for Chiefs fans. If Mahomes can play, the Chiefs’ dominance has been well documented.

They can flip the switch and tear apart just about any defense in the blink of an eye. Their defense is coming off a game in which they were the stars of the day. Tyrann Mathieu had a crucial interception in this game. Also, Daniel Sorensen forced a fumble at the goal line that resulted in a touchback on a controversial play. The Chiefs’ offense is great, but don’t sleep on their defense.

When it comes to my playoff best bets, the Bills winning this game may be the best. They are facing a team that is inconsistent right now. Plus, we don’t know how effective Patrick Mahomes will be this week. The Bills are one of few teams who can go toe to toe with Kansas City. They get the win in my NFL picks for the Conference Championship Round betting lines and playoff best bets.