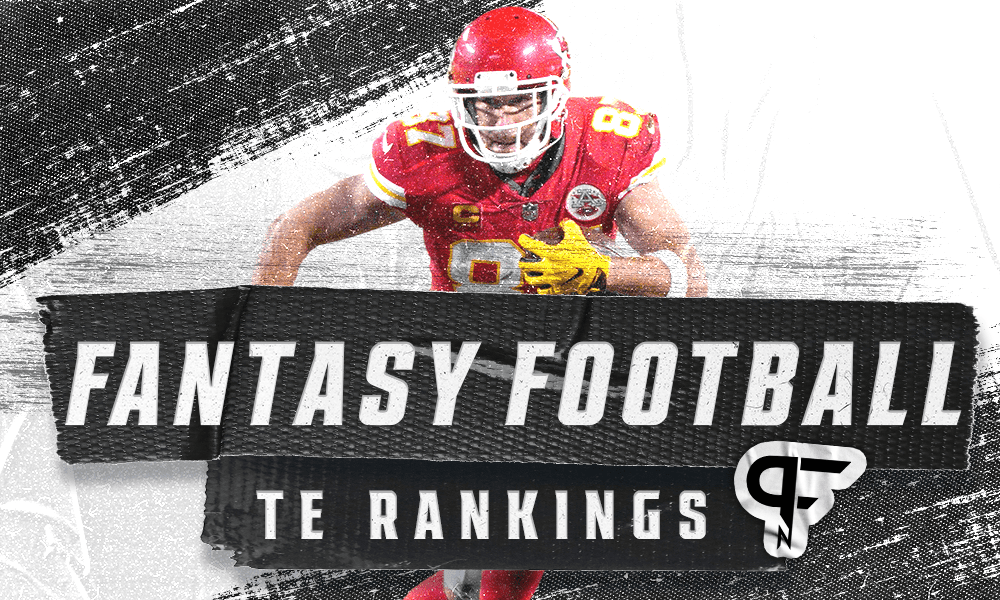 With the 2021 fantasy football season upon us, what are Pro Football Network’s consensus rankings at TE? Which players do our fantasy analysts see as must-starts, and which players should you be hesitant to select when your drafts begin? Let’s take a look at the consensus 2021 TE rankings from our Senior Fantasy Analyst Eric Moody and our Fantasy Analyst Tommy Garrett.

At the most scarce position in fantasy football, which tight ends are elite?

The top 3 are in a class of their own

There’s not much to say about Travis Kelce that hasn’t been said already. He’s in a tier all by himself and the only one worth taking in the first round of fantasy drafts. Not only does Kelce prevent fantasy managers from having to dig through free agency and the waiver wire to fill the position, but he also acts as a legitimate WR1 in the process. To clarify, Kelce finished last season with 312.8 PPR fantasy points. That would’ve been good enough to finish as the WR4 overall.

Kittle and Waller round out the top three of TE rankings. Kittle only played in half of the games last year, but he totaled 11 receptions on 14 targets for 160 yards in the 49ers’ final two games upon his return. Waller was the TE2 on the season and the only one within an earshot of challenging Kelce for the top spot.

Hockenson and Andrews are nice consolation prizes if you happen to miss out on the top three. It could be argued that both players are the top options in their respective offenses. Andrews has been the most reliable of Lamar Jackson’s pass catchers, even though his consistency dropped off in 2020. And Jared Goff will likely lean on Hockenson heavily in Detroit while they rebuild.

If he weren’t a rookie, Kyle Pitts would likely be higher in our TE fantasy rankings. Still, it says a lot of Pitts’ caliber to be mentioned alongside the others before ever stepping foot on an NFL field.

Dallas Goedert and Noah Fant ready to take the next step

Goedert has proven that even with Zach Ertz in the lineup, he has standalone value. If and when the Eagles do finally move on from Ertz, Goedert will have a wide-open opportunity to move up in the fantasy TE rankings. Fant finished last season as the TE9. To give you an idea of how scarce the TE position is, in only five of his 15 games did he finish with double-digit PPR fantasy points.

Like the rest of the Packers’ offense, Tonyan’s projection falls on the heels of the Aaron Rodgers saga. However, if it is Jordan Love under center, he may rely on Tonyan in short passing situations. Still, Tonyan’s TD rate from a year ago is unsustainable regardless of who’s under center.

Other than Goedert, Higbee has the highest upside of tight ends in this range. With Gerald Everett now in Seattle and an upgrade at QB, Higbee could have a stellar season in 2021. Logan Thomas finished last year as the TE4. While that’s unlikely to occur again with Ryan Fitzpatrick at QB, he’s a safe option to have throughout the year. Gesicki was the TE7, but new additions to the Dolphins’ offense — plus the selection of Hunter Long — have him tinkering on the low-end TE1 level.

In our second set of TE rankings, which players are better served as streaming options throughout the season?

Patriots tight ends cancel each other out

Kyle Rudolph is now in New York, and there’s an expectation that Irv Smith will now break out in the Vikings’ offense. However, Minnesota doesn’t throw the ball at a high rate. With Justin Jefferson and Adam Thielen as the leading pass catchers, Smith’s ceiling is somewhat capped.

Like the stock market, the fantasy community watched Jonnu Smith’s fantasy value skyrocket for one day — only to see it plummet the very next day. One day after Smith signed a four-year deal worth up to $50 million, the Patriots brought in Hunter Henry. Both were respectable TE options on their former teams. Now that they’re together, they basically cancel each other out. It will be a crapshoot to see who turns out to be the better option.

Engram has been on a downfall the past few seasons. Furthermore, the Giants added Rudolph amongst other free agents, so it’s unlikely he climbs back up in the TE rankings anytime soon. Gronkowski is still tied to Tom Brady, and that’s a good thing. As one of Brady’s top red-zone options, it’s possible Gronk finishes the year as a TE1. However, consistency will be an issue. Cole Kmet could break out for the Bears regardless of who’s under center, provided Jimmy Graham is not standing in the way.

Blake Jarwin and Adam Trautman are breakout candidates for 2021

Both Jarwin and Trautman stand out as potential fantasy TE breakout candidates. Jarwin was considered a breakout candidate last season before tearing his ACL in Week 1. Dalton Schultz performed admirably in his place and finished as the TE11 — giving Jarwin truthers a valid argument for their case. Meanwhile, Trautman is now out of Jared Cook’s shadow and ready to take the throne of TE1 in New Orleans. Who is under center for the Saints shouldn’t have much impact on Trautman’s outlook, although Taysom Hill may be the better play for his production.

Everett and Firkser are also sneaky options in the back end of fantasy drafts. Everett’s ceiling is likely capped in Seattle’s run-first approach, but he could be viable for Russell Wilson when needed. Meanwhile, the Titans have a ton of vacated targets (192 to be exact) leftover from last season. Most of these are expected to go to A.J. Brown and Julio Jones, but Firkser could develop a nice role for himself and provide fantasy production in the process.

We’re still waiting to see what happens with Ertz and where he’ll end up. Rumors have been circulating that Buffalo is a possible option. If true, Ertz’s ranking would likely catapult to TE1 territory once again. Ebron has quietly been one of the more consistent tight ends for fantasy. Last season, he had eight finishes of 11+ fantasy points. The Steelers did draft Pat Freiermuth in Round 2 of the NFL Draft, but like most rookie tight ends, he’s not expected to immediately make an impact.

Where do the rest of the TE options fall on our 2021 fantasy rankings?