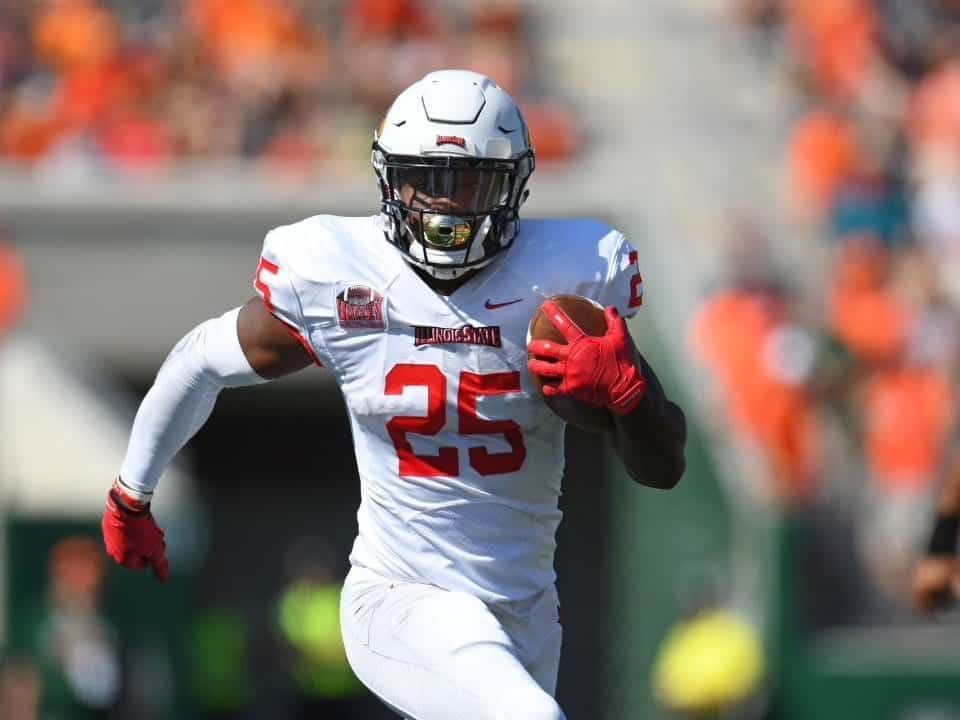 Photo Credit: USA Today
What's in this article? Click to show
Quarterback play was spotty
Skill players looking to make a name for themselves
The lack of speed is noticeable
Offensive linemen stand out on Day 1 of the West practice
Defensive linemen win the day

Unlike the snappy 60-minute practice of the East squad earlier in the day, the West practice labored on for more than two and a half hours. Like the East practices, there were several standout performances; primarily on the lines of scrimmage.

Except for a few nice throws from Missouri’s Kelly Bryant, the quarterback play on the West left a lot to be desired. Utah’s Tyler Huntley was all over the place with his throws and tossed a bad interception to end the day. North Texas’ Mason Fine needs a lot of work on his downfield accuracy and does not possess a next-level arm, and Yale’s Kurt Rawlins had a non-descript showing.

Skill players looking to make a name for themselves

Illinois State’s James Robinson was the best running back of any who practiced today. He had a long run (30+ yards) early on in which he shook free several defenders and also looked good catching the ball out of the backfield. Robinson will be attending the combine in February.

Tight ends from the West looked much better than the collection on the field for the East. San Diego State’s Parker Houston stood out blocking and looked like a sixth offensive lineman on occasion. Tennessee’s Dominick Wood-Anderson made a few nice receptions but also had a couple of drops. He looks as though he has an upside.

The lack of speed is noticeable

There’s one skill missing from the receivers here at the Shrine Game: speed. No one seems to have it.

Notre Dame’s Chris Finke ran sharp, crisp routes and caught the ball well but he’s an underneath receiver. Boise State’s John Hightower had a bad drop early in practice then picked it up and made several nice grabs. Juwan Johnson looks like he should be playing with the tight ends; he has tight end size and practiced to tight end speed today, the latter which surprised me.

Offensive linemen stand out on Day 1 of the West practice

As mentioned, several nice performances were turned on from the linemen, both offensive and defensive.

Oregon’s Calvin Throckmorton looked efficient and effective at his new position of guard. Daishawn Dixon got beat on occasion but more times than not he controlled or dominated opponents. TCU’s Cordel Iwuagwu needs to get a bit stronger but his fundamentals and ability to block with leverage were the best of any lineman today.

Arizona State’s Cohl Cabral had several nice moments as did Kevin Dotson of Louisiana.
Missouri’s Tre’vour Wallace-Simms and Yasir Durant were inconsistent but their upside is tremendous.

For the most part, the day was won by the defensive lineman from the West. Bravvion Roy of Baylor and Khalil Davis from Nebraska were the most dominant on the day.

Roy was consistently collapsing the pocket and penetrating the line of scrimmage while Davis was impossible to stop during one-on-ones. He drew a rise from scouts on hand during one play when he annihilated Texas’ Zach Shackleford. Khalil’s brother Carlos also looked good as the day progressed. His hand technique and quickness were outstanding. I’m told the Davis brothers are on the waiting list as far as combine invitations are concerned.

The same can be said for Bryce Huff of Memphis, who was used out of a three-point stance as well as standing over tackle. Michigan State’s Raequan Williams displayed some impressive athleticism and flashed power. He needs to be more consistent and improve his strength. He and Daishawn Dixon had some terrific battles.

North Dakota State’s Derek Tuszka acquitted himself well and showed a nice degree of pass-rush ability. In the secondary Jace Whittaker of Arizona, Chris Williamson of Minnesota and safety Patrick Nelson of SMU had their share of eye-popping plays.

In this article:East-West Shrine, Featured, featured