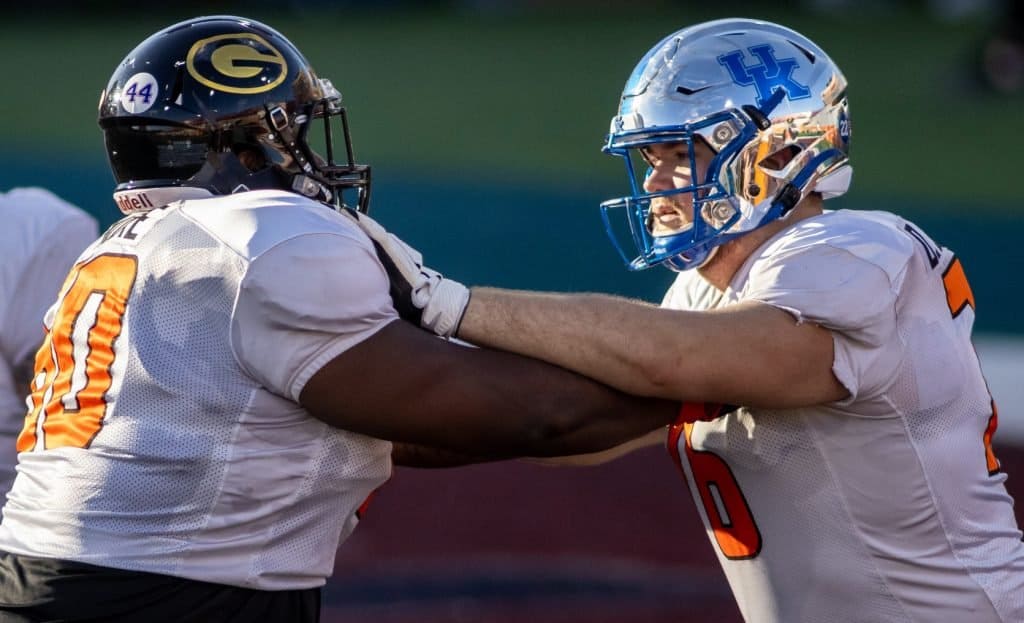 If the old cliché that availability is your best ability still holds true in the NFL, then Kentucky center Drake Jackson should be one of the most valuable players in the 2021 NFL Draft. A veteran of 44 consecutive starts, he is hoping to be the first Wildcats center to hear his name called since Dermontti Dawson in 1988.

Positives: Slightly undersized center who plays tough football and gets the most from his ability. Fires off the snap into blocks, quickly gets out to the second level, and nicely redirects to linebackers, displaying the ability to hit a moving target. Stays square, adjusts to oncoming opponents and seals defenders from the action.

Keeps his head on a swivel, plays with great awareness, and works well with teammates. Very effective with his hands, correctly places them into opponents, and rides defenders from their angles of attack. Knows what’s happening on the field and does a great job quarterbacking the offensive line.

Negatives: Possesses average size and strength, and is often tossed aside by bigger opponents. Not the greatest athlete.

Analysis: Jackson is a smart, hard-working center who lacks great upside, but has a terrific feel for what’s happening on the field. He’s a fringe late-round pick, but his approach to the game should help him catch on as a backup center.

It would be a remarkable accomplishment if Jackson were to emulate his fellow Kentucky center in the NFL Draft. Dawson was a seven-time Pro Bowler who was enshrined into the Hall of Fame in 2012. Although Jackson is a long way from those achievements, he has been no stranger to success since playing football in his hometown of Versailles, Kentucky.

In fact, he was an incredibly talented high school prospect out of Woodford County High School. A two-time first-team All-State honoree, Jackson’s performance earned him an invitation to the US Army All-American Game. He was named a captain of the game-winning West Team in a further demonstration of his ability and leadership skills.

A four-star prospect who was heavily recruited, he received offers from the likes of Alabama, Ohio State, and Florida. However, the hometown kid wanted to represent the Kentucky Wildcats and he committed early in the process. Described as a hard worker with the mental capacity above most high school kids, Jackson graduated early and enrolled at Kentucky in January 2016.

Despite arriving at the program early, Jackson still redshirted his freshman season. However, he earned game time early as a redshirt freshman in 2017, emerging as the starter for the season’s final seven games. During his first two seasons as the starting Kentucky center, Jackson helped pave the way for Benny Snell as the running back rushed through the program record books.

Although Snell departed for the NFL Draft in 2019, Jackson remained the anchor of an offensive line that helped Kentucky be dominant on the ground. The Wildcats set school records for rushing yards, rushing touchdowns, and averaged an impressive 6.4 yards per carry. The Kentucky center earned first-team All-SEC honors for his contributions, which included only allowing one sack in the whole of the 2019 season.

Amidst the disruption of the 2020 college football season, Jackson earned second-team All-SEC honors. He also had the distinction of being named a captain. Starting every game, he left the program to declare for the 2021 NFL Draft, having started 44 consecutive games as the Kentucky center.

Jackson’s play throughout his Kentucky career earned him an invitation to the 2021 Senior Bowl. Although on the losing side, he impressed during the week of practices. He had some particularly impressive reps against FSU defensive tackle Marvin Wilson.

As a result of the Wildcats’ offensive style, the Kentucky center’s best fits will be in predominantly run-focused offenses. Although Jackson has displayed solid pass-protection ability, he excels as a run blocker. The amount of experience he has from his college career could mean that he gets the opportunity to contribute early in an NFL offense. That, of course, depends on his landing spot and ability to transition smoothly to the next level.

Multiple NFL teams have a need at the position in the 2021 NFL Draft. Therefore, the Kentucky center shouldn’t be short of suitors. Some teams that fit his skill set include the San Francisco 49ers, New York Giants, and Pittsburgh Steelers. Incidentally, Pittsburgh is where the last Kentucky center to be drafted to the NFL started his career. It would also reunite him with former Wildcats teammate Benny Snell.