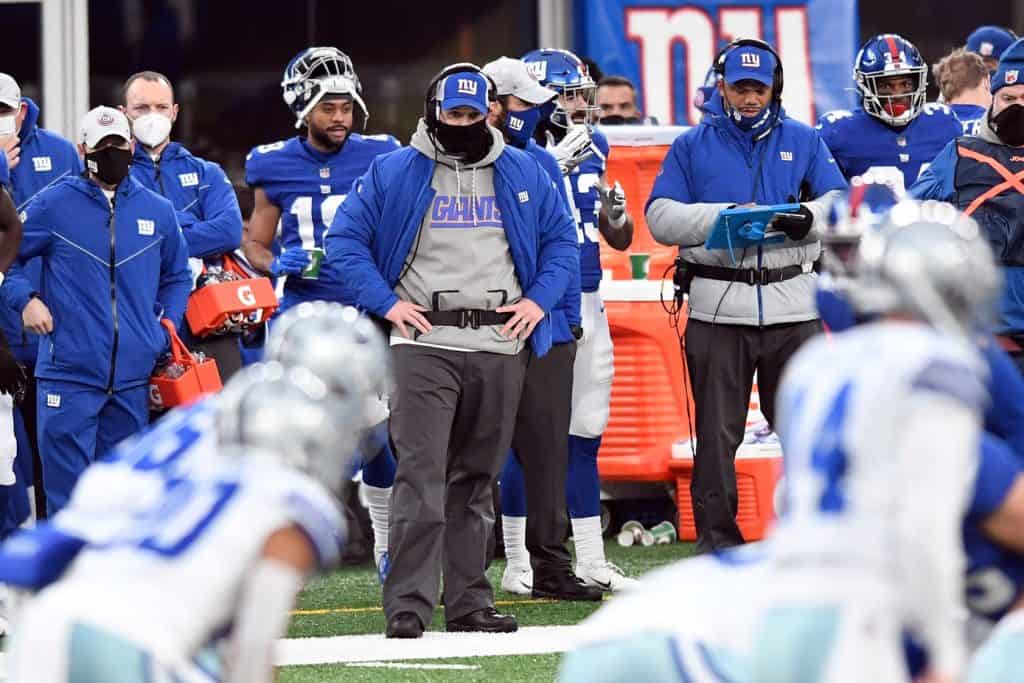 There are no more excuses for Daniel Jones as he hits his third season. By bringing several big-name offensive players, Daniel Jones has a full complement of weapons at his disposal. Jones threw just 11 touchdowns in 2020 to go with 11 interceptions and 6 fumbles, and the Giants finished with the 31st-ranked scoring offense. He took a sizable statistical step back after throwing for 24 touchdowns in 12 starts as a rookie in 2019. It is now or never.

The Giants signed veteran QB Mike Glennon to backup Jones in the offseason. Glennon, 31, has played in 34 regular season games with 27 starts in eight seasons with five previous teams.

Running backs don’t matter. Yeah, sure, tell that to the Giants and playing without Saquon Barkley. The 2018 NFL Offensive Rookie of the Year missed the majority of the 2020 season after tearing his right ACL in Week 2. Barkley ran for 1,307 yards and caught 91 passes for 721 yards with 15 combined touchdowns as a rookie. He followed his phenomenal performance with 1,441 yards from scrimmage in 2019 but missed three games because of a high ankle sprain.

With Wayne Gallman a free agent, the New York Giants needed to add to their depth chart as an insurance policy to Barkley’s recovery. They turned to Devontae Booker.

Booker spent his first four seasons with the Denver Broncos, and in 2020, spent the year backing up Josh Jacobs in Las Vegas. Booker has carried the ball 382 times for 1,526 yards and 9 touchdowns in his five seasons, adding 122 receptions for 956 yards and a touchdown. Buried on the depth chart, Taquan Mizzell has not seen a touch since 2018.

It took a while due to the slow market, but eventually, we saw a wide receiver land a significant contract. The New York Giants went all out and added one of the best WRs available to their depth chart with former Detroit Lion Kenny Golladay.

Golladay played 16 games once in his four seasons with the Lions but did have back-to-back 1,000-yard seasons and a league-best 11 touchdowns in 2019. Golladay’s 13.92 air yards per target over the past four seasons is seventh among all wide receivers. He played in only five games last season while dealing with a hip injury.

Darius Slayton was electric in his rookie season but fell off in 2020 as the offense struggled. Slayton finished his rookie season as the team’s receiving leader with 740 yards while hauling in 8 touchdowns. At first, it appeared he would have a repeat season in 2020 after a two-touchdown opening game. However, Slayton would only catch one more TD (Week 5) along with his only other 100-yard receiving game.

Somewhat a forgotten player, Sterling Shepard is a high-volume player who can be highly effective when peppered with targets. Over his five years, Shepard has never seen less than 83 targets. When in the slot, he is one of the better receivers in the league.

The Giants added another WR in free agency with Bengals WR John Ross III. Known for his incendiary speed (4.22), Ross will attempt to revive his career with Daniel Jones and the Giants.

Evan Engram (26) made his first Pro Bowl in 2020 after making 63 catches for 654 yards and a touchdown. Drops were a massive issue for Engram last season (11) though he did play his first 16-game season.

Where Engram can be inconsistent, few TEs are more of a sure thing than Kyle Rudolph. Added in free agency, Rudolph will be a favorite target of Jones inside the red zone and serve as an inline blocker, allowing Engram to move outside to take advantage of his athleticism.

After opting out of the 2020 season, Nate Solder and the Giants agreed to a new contract. Solder has started 127 of the 130 regular season games and all 16 postseason games in which he’s played.

Andrew Thomas, the Giants’ first-round draft choice in 2020, played left tackle, where he appeared in every game with 15 starts while filling in for Solder.

Another rookie in 2020, Matt Peart appeared in 11 games while making one start. Peart played well last season and will be in the conversation for the starting right tackle position.

Will Hernandez came into the 2020 season as the New York Giants’ starting left guard and has started all 32 games since his second-round selection in 2018. He started the first seven games last season before testing positive.

During his absence, 2020 fifth-round pick Shane Lemieux played well enough to take the starting job, relegating Hernandez to the bench. The competition between the two will be a hot topic during the offseason, given the draft capital disparity.

Kenny Wiggins (32) started the 2020 season with the Lions but was released in October after two previous seasons with the team. The Giants signed him in November before sending him to the practice squad. He signed a reserve/futures contract in January.

Nick Gates won the starting job out of camp in 2020 after beating out Spencer Pulley. He started all 16 games for the Giants and has experience at guard and tackle, making him one of the most versatile linemen on the New York Giants’ depth chart.

The Giants and defensive tackle Austin Johnson agreed to a one-year deal that will keep the productive DT back for another season. Johnson, who turns 27 in May, played in all 16 games and tallied 18 tackles (8 solo), 1 sack, 2 tackles for loss, 1 pass defensed, and 1 forced fumble.

B.J. Hill had an excellent rookie season, recording 5.5 sacks in 2018. However, he’s fallen down the depth chart a bit since then, starting just five games over the last two seasons.

After initially placing the franchise tag on him, the New York Giants and Leonard Williams agreed on a three-year deal worth $63 million with $45 million guaranteed to keep the highly productive rusher on their depth chart. Williams was the best player on the Giants in 2020 and enjoyed a breakout campaign, recording 11.5 sacks and earning 14 tackles for loss and 30 QB hits.

Another significant move made by Dave Gettleman was the signing of Ifeadi Odenigbo. Odenigbo played in 32 games with 15 starts with the Minnesota Vikings, recording 59 tackles (34 solo), 10.5 sacks, 28 quarterback hits, 10 tackles for loss, a forced fumble, and 2 fumble recoveries. Last season, Odenigbo started 15 games and had a career-high 35 tackles (16 solo) and 3.5 sacks.

Oshane Ximines played in just four games in 2020 as a shoulder injury placed him on the injured reserve. His season ended after undergoing shoulder surgery in November.

A UDFA out of Dartmouth, Niko Lalos saw his first action in Week 12 last season. He will have to compete for a roster spot this season.

Former Miami Hurricane R.J. McIntosh has appeared in 18 games in three seasons with the Giants. However, he did not play in 2020. In 179 defensive snaps, McIntosh has 18 tackles, 2 sacks, 3 quarterback hits, and two tackles for a loss.

Once a second-round pick by the Chiefs in 2018, Breeland Speaks has yet to live up to expectations. He played all 16 of his career games as a rookie (four starts). Speaks recorded 8 quarterback hits, 1.5 sacks, 3 tackles for loss, 1 forced fumble, and 2 fumble recoveries. He missed all of 2019 due to a knee injury and was released before the 2020 season. Last year, he spent time on the Las Vegas and Dallas practice squads before signing a reserve/futures contract with the Giants.

Since 2017, no one has more tackles than Giants LB Blake Martinez with 594 in his 64 starts. Martinez started all 16 games in 2020 while playing on 97% of the defensive snaps as one of the most critical players on the New York Giants’ depth chart. The fifth-year pro finished the season with 151 tackles (third in the NFL) with 3 sacks, 9 tackles for losses, 6 quarterback hits, 2 forced fumbles, 1 fumble recovery, 1 interception, and 5 passes defensed.

Another new addition to the Giants’ depth chart is LB Reggie Ragland. A second-round pick in 2016 by Buffalo, he suffered a torn ACL and was subsequently traded to the Chiefs the following year. He spent the 2020 season with the Lions.

A third-year pro out of Georgia, Lorenzo Carter has 88 tackles, 8.5 sacks, and 23 QB hits in his first two years while only making 17 starts. In Week 5 last season against the Dallas Cowboys, Lorenzo Carter ruptured his Achilles, ending his season. Carter finished his third NFL season with 15 tackles (11 solo) and 1 sack.

Another move during a busy free-agency period was the addition of former Washington LB Ryan Anderson. He has played in 52 games (four starts) while recording 78 tackles (49 solo), 7 tackles for loss, 6 sacks, 15 quarterback hits, 5 forced fumbles, and 4 fumble recoveries. In 2020, Anderson played nine games, making 7 tackles (4 solo), including one for a loss.

Did I mention yet the New York Giants were busy in the offseason reloading their depth chart? Cornerback James Bradberry signed with the New York Giants on a three-year, $45 million contract with $32 million guaranteed. In fact, Gettleman drafted Bradberry while a member of the Carolina Panthers in 2016. Over the past four years, Bradberry has totaled 279 tackles, 8 interceptions, and 2 forced fumbles.

DJ Khaled voice: “Another one.”

Coming off an injury-shortened 2020 campaign with the Tennessee Titans, the New York Giants showed no reservations when they signed Adoree’ Jackson to a lucrative deal. New York and Jackson agreed to a three-year, $39 million contract with $26.5 million guaranteed and potential first-year earnings up to $16 million with incentives.

Seeing a guy get waived and then get a raise the following offseason is — surprising. If he can return to his 2019 form, the contract will suddenly become much less jarring.

Lining up in the slot, Darnay Holmes played above expectations during his rookie season. A fourth-round pick out of UCLA, Holmes appeared in 12 games, making five starts, and recorded 30 tackles, 5 passes defensed, and an interception.

CB Sam Beal opted out of the 2020 season due to health concerns surrounding the pandemic. During his 2019 rookie season, Beal played in six games, making 26 tackles.

The Odell Beckham Jr. trade centerpiece, Jabrill Peppers is one of the more dynamic players on the New York Giants roster. He set career-highs in tackles last season with 91, along with 8 tackles for a loss, an interception, and a fumble recovery.

If not for Logan Ryan, the Giants might not have Adoree’ Jackson. A former teammate, Ryan was a pivotal recruiter during discussions. Ryan played in all 16 games in 2020, making 15 starts, and recorded 94 tackles and an interception.

If you wonder who on the New York Giants’ depth chart will be the breakout player, look no further than Xavier McKinney. The second-year safety out of Alabama spent the first 10 games of his NFL career on injured reserve due to a foot fracture. Once on the field, McKinney saw his snap usage shoot up to an 89% share in Week 17. In four games, he recorded 25 tackles (one for a loss) and an interception.

Julian Love will see time all over the field in 2021, just as he did the last season. Love played in all 16 games, starting six, and finished fourth on the team with 61 tackles (45 solo).