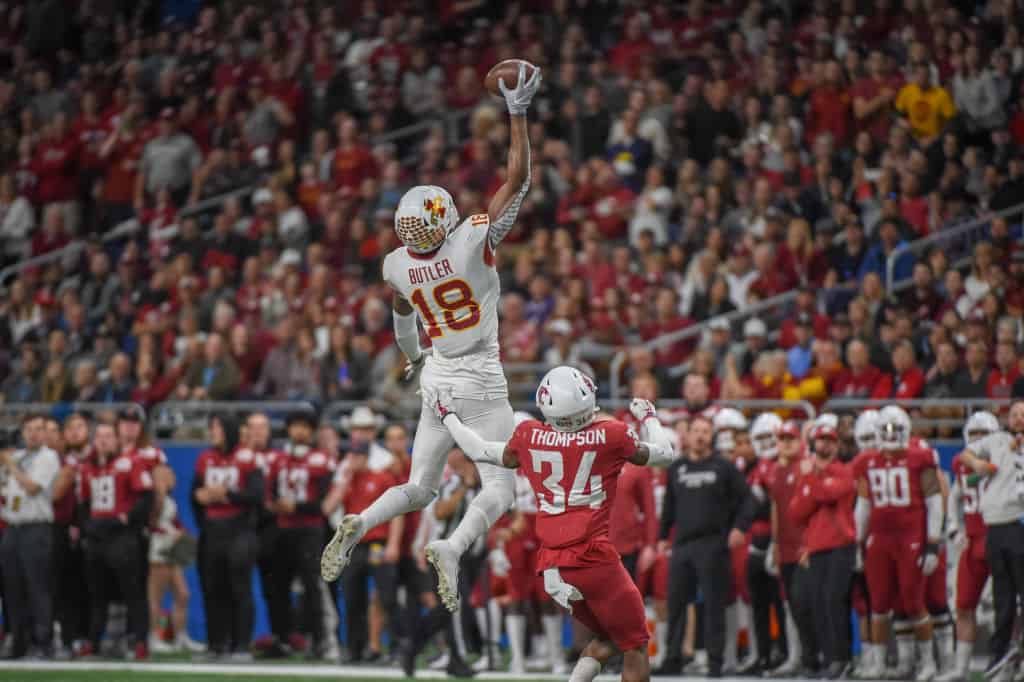 The Philadelphia Eagles have made one of the more surprising moves of the season by signing Hakeem Butler to their team. However, that is not the intriguing part. Butler’s signing was prompted due to the loss of Dallas Goedert, and the team has designated Butler as a tight end, not a wide receiver. After failing to stick with any organization, does the new opportunity with the Eagles and new position equal fantasy football value for Hakeem Butler moving forward?

After dealing with an already depleted WR group, the loss of Dallas Goedert looms large over the 0-2-1 Eagles

From the awful start for Carson Wentz to the plethora of injuries on the offensive line, and especially at skill positions, the Eagles offense has been a mess so far this season. They entered Week 3 with both Jalen Reagor and Alshon Jeffery on the IR and could not afford more injuries.

Unfortunately, that is what happened. First, DeSean Jackson exited the game against the Cincinnati Bengals early with a hamstring injury and is considered day-to-day. The most impactful loss is that of TE Goedert, who has been Wentz’s safety blanket. Goedert limped off the field in the first quarter of Sunday’s 23-23 tie with the Bengals following a short completion and did not return. He entered Week 3 as the team leader in targets, catches, receiving yards, and yards after the catch.

ESPN’s Adam Schefter reported that Goedert has a small fracture in his ankle and will be out indefinitely. The Eagles placed Goedert on injured reserve Tuesday, meaning he will have to miss at least the next three weeks. While the three-week timeframe is the minimum a player can be out under this designation, he will miss more than the next three games during his recovery.

Head coach Doug Pederson knows how large of a loss that Goedert is to their team.

“Losing a guy like Dallas that has a huge role in protections [and the] run game, but he’s a playmaker with the ball in his hands and down the field. He’s a big part of our game plan every week, and so losing him, we obviously had to make some adjustments on the fly, [which] makes it tough,” coach Doug Pederson said.

Goedert was TE12 in PPR fantasy leagues and is a massive loss to fantasy managers who now have to search the waivers in what is already a position depleted of stable production.

Chalk this up to moves we did not see coming. In response to Goedert’s loss, the Eagles signed receiver Hakeem Butler off the Carolina Panthers’ practice squad and have already designated him as a TE moving forward.

The 2019 4th-round selection is a very intriguing prospect that has not found a way to make his name yet in the NFL. Butler brings elite size to the Eagles while providing Wentz a massing target window.

Butler is 6’5, 227lbs, and brings his 4.48 speed and massive 83″ wingspan to the Eagles. Yes, he is lighter than you want in a tight end, but if they use him as they did Goedert as a move off-line TE, this move could make complete sense for the team.

Butler was a prolific pass-catcher for the Cyclones. During his final year at Iowa State, he caught 60 passes for 1,318 yards and nine touchdowns.

The No. 103 overall pick of last year’s draft, Butler spent Arizona’s entire 2019 season on injured reserve with a finger injury. He then failed to make the Cardinals’ practice squad after being waived this summer, which led to the Panther’s signing him to their practice squad.

There were some rumors that Butler was receiving a first-round grade by some scouts, which made his fall to the fourth-round surprising.

Butler was someone who dynasty fantasy managers were stashing all of 2019 due to his tape and measurables, knowing that he could capitalize on it if he got a shot. Heading into 2020 rookie drafts, rosters have to be trimmed down, and it wouldn’t surprise me if Butler were one of those players who got the ax. If he is on waivers, I would be rushing to pick him up onto my team. But does he have fantasy value right away?

I absolutely believe that Hakeem Butler now is at his highest fantasy value since he was selected in rookie drafts in 2019. He went to a Cardinals team that loaded up on receivers, and Butler, due to injury, was lost in the shuffle. Now on the Eagles, he has a path to playing time and to make an immediate impact.

I don’t think we will see this take effect in Week 4 however. It is going to take some time to learn the new system that the Eagles use. Not only that, Butler has to learn an entirely new position as well. If he can grasp this quickly and learn on the run, is it out of the question to wonder if Bulter can show us shades of Darren Waller?

Give it time to allow Butler to develop and get through the learning curve; once that happens, look out NFC East and fantasy opponents. The paring of Zach Ertz and Butler could be a dangerous matchup for any opposing defense.