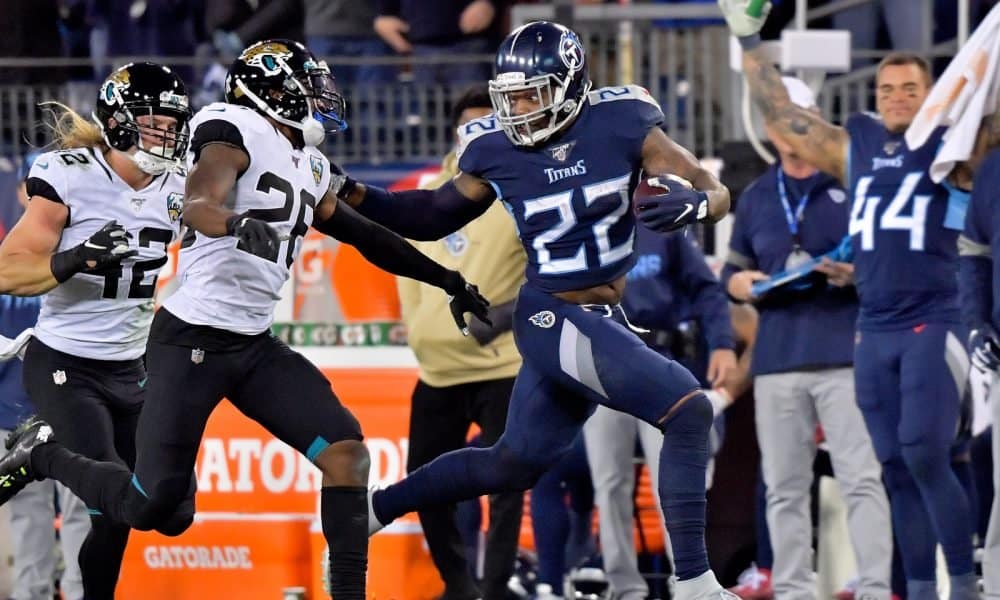 Pro Football Network’s Senior NFL Analyst Matt Williamson recently released his top 25 running backs in the NFL. In his positional rankings, Titans RB Derrick Henry was listed as the sixth-best back heading into the 2020 season. In this reaction piece, I argue that Henry should have been ranked a lot higher in Williamson’s list after leading the NFL in rushing yards last season. I also touch on which backs were listed higher than Henry as well.

Who’s ahead of Derrick Henry in Williamson’s 2020 RB rankings?

Christian McCaffrey, unquestionably, is widely considered as the NFL’s top rusher. In 2019, McCaffery put together a remarkable season for the Panthers. He became the third player in NFL history to have both 1,000 yards rushing and receiving in a single season.

In 2020, McCaffrey could be in line for yet another impactful season. New Panthers head coach Matt Rhule and offensive coordinator Joe Brady are known for their exotic high-scoring offenses, and McCaffrey is the perfect weapon for the Panthers to rely on this season.

Related | Christian McCaffrey is a great running back, but he can still improve

After McCaffrey, Williamson’s rankings are interesting and leave plenty of room for debate. Giants RB Saquon Barkley comes in at number two followed by Ezekiel Elliott, Alvin Kamara, and Dalvin Cook. All of the RBs listed ahead of Henry are much more involved in the passing-game than Henry is, which likely serves as a key factor in Williamson’s placement of him.

Why should Derrick Henry be a top-five RB in 2020 rankings?

Coming off of a four-year $50-million dollar contract extension, Henry is ready to carry the workload for the Titans offense once again. Henry had his best season in the NFL in 2019, rushing for 1540 yards and 16 touchdowns on 303 carries. He averaged 20.2 rushing attempts per game and averaged an incredible 5.1 yards per attempt.

Throughout Henry’s four-year career in the NFL, he has improved upon his rushing yards every season. He’s also been called upon to carry a larger load in the offense year after year. Henry has demonstrated that he’s more than capable of doing so for the Titans, as durability has never been an issue for him. He uses his combination of size and speed to wear defenses down over the course of the game. He’s also been outstanding as a pass blocker, making him the perfect asset for quarterback Ryan Tannehill.

What really makes Henry amazing with the football is the ability to shed off tacklers and run through contact. Henry measured out as the number one running back in the NFL according to Pro Football Network’s Offensive Share Metric in 2019. To put Henry’s season into perspective, OSM is used to “gauge an individual player’s actual effectiveness in a game, separate from the performances of their teammates.”

The Titans lost starting right tackle Jack Conklin who departed for the Browns this offseason but drafted Isaiah Wilson in the first round as his replacement. Wilson entered the NFL Draft as a redshirt sophomore, starting both of his two seasons for the University of Georgia. He showed incredible potential in those two seasons, but the real area where he shined was in run blocking.

If Wilson needs a little time to develop before he is thrust into the starting lineup, Dennis Kelly has proven that he is more than capable of starting at RT. The Titans brought Kelly back this offseason on a three-year $21-million dollar deal. 2019 was Kelly’s fourth season with the Titans, and his latest contract demonstrates just how important he is viewed to be by this team and for Henry’s success as a rusher.

For the Titans, having a majority of the offensive line back will be huge for Henry and the rushing offense. Henry should also benefit from rookie Darrynton Evans and his presence in the backfield. Evans is a great pass-catching back, and with both he and Henry in the game, defenses won’t be able to focus solely on stopping the run. This will create more opportunities for Henry to continue his dominance as a rusher.

Who should Henry surpass in Williamson’s 2020 RB rankings?

Williamson’s ranking of the top three RBs being McCaffrey, Barkley, and Elliott is spot on, but Henry isn’t too far behind them. All three of the top backs are the most important players for their teams and will command a majority of the reps in their respective offensive schemes. Henry is likely to command the same type of target share as all three of the other backs, but won’t be nearly as involved in the passing game.

Kamara is highly involved in the Saints high scoring offense, but the all-time single-season reception leader Michael Thomas commands a majority of the targets from Drew Brees. Kamara is extremely skilled in both the run and passing game, but durability has been an issue throughout his career, as he hasn’t played a full 16 game season since his rookie year.

Related | Why Alvin Kamara deserves his contract extension in 2021

Additionally, injuries have been a major concern for Dalvin Cook over the course of his career, as he has yet to play a full NFL season. 2019 was the first season that Cook had stayed relatively healthy playing in 14 games for the Vikings. It’s unlikely that Cook will outperform Henry in 2020.

Henry could lead the NFL in rushing yards in 2020

Kamara and Cook are both incredible RBs and their involvement in the passing game is a real difference-maker, but Henry’s effectiveness in between the tackles and the quantity of carries that he commands on a per-game basis is undervalued. The Titans offense is built around getting Henry as many carries in-game as possible in hopes of wearing down opposing defenses. If Henry can continue to be as efficient with those carries, he could lead the NFL in rushing yards once again in 2020.

Henry has been one of the more durable running backs in the NFL throughout his career. The Titans’ ability to rely on Henry to carry such a large load of the offense is huge for his production. Cook and Kamara are both deserve to be ranked among the top RBs in the NFL, but the 2019 rushing leader deserves to be ranked ahead of them heading into the 2020 season.