Christian McCaffrey is a great running back, but he can still improve

Christian McCaffrey is an elite running back, but that doesn't mean he's perfect. PFN's Offensive Share Metric shows exactly where he could improve.

By Lucas Ellinas
June 16, 2020
Jump around this article Click to show
McCaffrey is a great running back, but his abilities as a runner don’t quite match that standard
What caused McCaffrey’s (relatively) low grade?
McCaffrey’s overall statistics are slightly misleading
Despite his flaws, McCaffrey is still an incredible running back

Christian McCaffrey is arguably the NFL’s best running back. His 2019 season was beautiful to watch – not only did he rush for 1,387 yards, the third-highest total in the NFL, but he also caught 116 passes for 1,005 yards, making him the only running back to break the thousand-yard receiving mark in 2019. Combining those numbers made him the NFL’s leader in yards from scrimmage by more than 600 yards, and his 19 total touchdowns were tied for the league lead.

As a reward for that incredible season, the Carolina Panthers gave McCaffrey a four-year, $64-million dollar contract, making him the NFL’s highest-paid running back. However, despite all of his accomplishments, McCaffrey’s season wasn’t perfect.

McCaffrey is a great running back, but his abilities as a runner don’t quite match that standard

This article is not about McCaffrey, the complete football player. Instead, I want to look solely at how he performed as a runner. Admittedly, this decision is in part the result of the limitations of the data available. PFN’s Offensive Share Metric (OSM) relies on the NFL’s Next Gen Stats to calculate its grades. Unfortunately, the NFL does not record advanced statistics for running backs as receivers. As such, we can’t create grades for them in that capacity.

That said, there is a great deal of value in discussing how well McCaffrey performed when we take his receiving abilities out of the equation. I mentioned earlier that he is arguably the best running back in the NFL, but he is clearly the best receiving running back. However, how good he is as a runner is a very different question. His counting statistics were undeniably excellent, but they don’t quite tell the full story.

By looking at the OSM, which measures how much impact a player had on the statistics they produced, we can evaluate how much influence a running back had on their offense. In McCaffrey’s case, his OSM grade of 17.10 ranked 14th out of 48 qualifying running backs.

That certainly isn’t awful, but it is lower than you would expect from a player of McCaffrey’s caliber. That number implies that, at least relative to some of the NFL’s other elite running backs, McCaffrey is a surprisingly inefficient runner. Even though he produced good numbers on the ground, he wasn’t fully responsible for creating them.

There are multiple factors involved in creating McCaffrey’s OSM grade. Among the most important was the fact that he faced less resistance than many other running backs. Opposing defenses placed eight or more defenders in the box against him 23.34% of the time, the 16th highest percentage in the NFL. As such, McCaffrey had an easier time gaining yards than many other running backs.

In fairness to McCaffrey, this problem is partly one of his own making. Under normal circumstances, defenses would consistently stack the box against a running back of McCaffrey’s caliber, especially given Carolina’s struggles at quarterback last season. However, McCaffrey’s receiving abilities demand his opponent’s respect, so they can’t fully commit to stopping the run.

And, to McCaffrey’s credit, he took advantage of the space his opponents gave him. He was one of the most efficient running backs in the NFL. In this case, the term “efficiency” is defined by the NFL as the number of yards of physical distance the player ran on the field for each statistical yard they gained. McCaffrey’s efficiency rating was 3.46. In other words, he ran 3.46 yards for each yard gained, the fourth-lowest number in the NFL. That is an impressive statistic in a vacuum, but McCaffrey had a much easier time achieving it than many of his counterparts at the position.

Related | OSM Back to the Future: Martellus Bennett’s top-ranked performance from 2016

Examining McCaffrey’s overall OSM grade is interesting, but it doesn’t tell the full story. The chart below shows how his OSM grade fluctuated from game to game. The black dots represent his OSM grades from each week during the regular season (measured in terms of OSM points earned per minute of play), and the yellow line marks the league average for running backs. 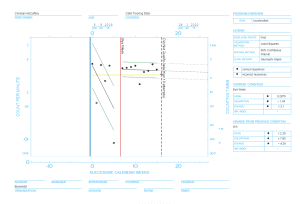 As you can see, McCaffrey was often above the league average, but was also wildly inconsistent, especially during the first half of the season, with grades ranging from a 24.06 in Week 1 to a 0.45 in Week 6. However, after the Panthers’ bye week, he became far more consistent. To see why his impact as a rusher varied so dramatically, and why he improved as the season went on, we need to look at how McCaffrey’s advanced statistics changed throughout the season.

Below, you can see McCaffrey’s week to week efficiency ratings compared to how often he faced eight or more defenders around the line of scrimmage.

While examining those numbers, a rather strange pattern emerges. McCaffrey’s three least efficient performances, Weeks 6, 2, and 12, all came in games in which the defenses he faced put eight men around the line of scrimmage less than 20% of the time. In fact, with a few exceptions, he seems to have been more efficient when facing stiffer resistance.

I can’t say for certain what is causing this pattern without talking to McCaffrey directly. It’s possible that even he doesn’t know, and that his changes in efficiency are based on in the moment, subconscious decisions. If I were to hazard a guess, I would suggest that McCaffrey adjusts his playstyle, consciously or otherwise, to fit the amount of space he is given.

When he has more space to work with, he uses it, but when his options are limited, he is forced to commit to a more direct path. However, regardless of its cause, this pattern helps to explain why McCaffrey improved during the back half of the season. Teams began to stack the box against him more and more as the season went on, and he responded by becoming more efficient.

Despite his flaws, McCaffrey is still an incredible running back

I have been somewhat critical of McCaffrey in this article, but my aim is not to suggest that the flaws in his game make him a bad running back. Rather, my intent is to show that he still has room to improve. He is already the best receiving back in the NFL, but he can still do better as a rusher. And he has already shown progress in that area during his short career.

His 2019 OSM grade was significantly higher than his grade of 15.85 in 2018, which itself was significantly higher than a grade of 12.45 in 2017. If McCaffrey can continue that trend, clearing up his inconsistencies from last season, he could become an even better running back than he is already. And given how dominant he is currently, that possibility should make the rest of the NFL very afraid.