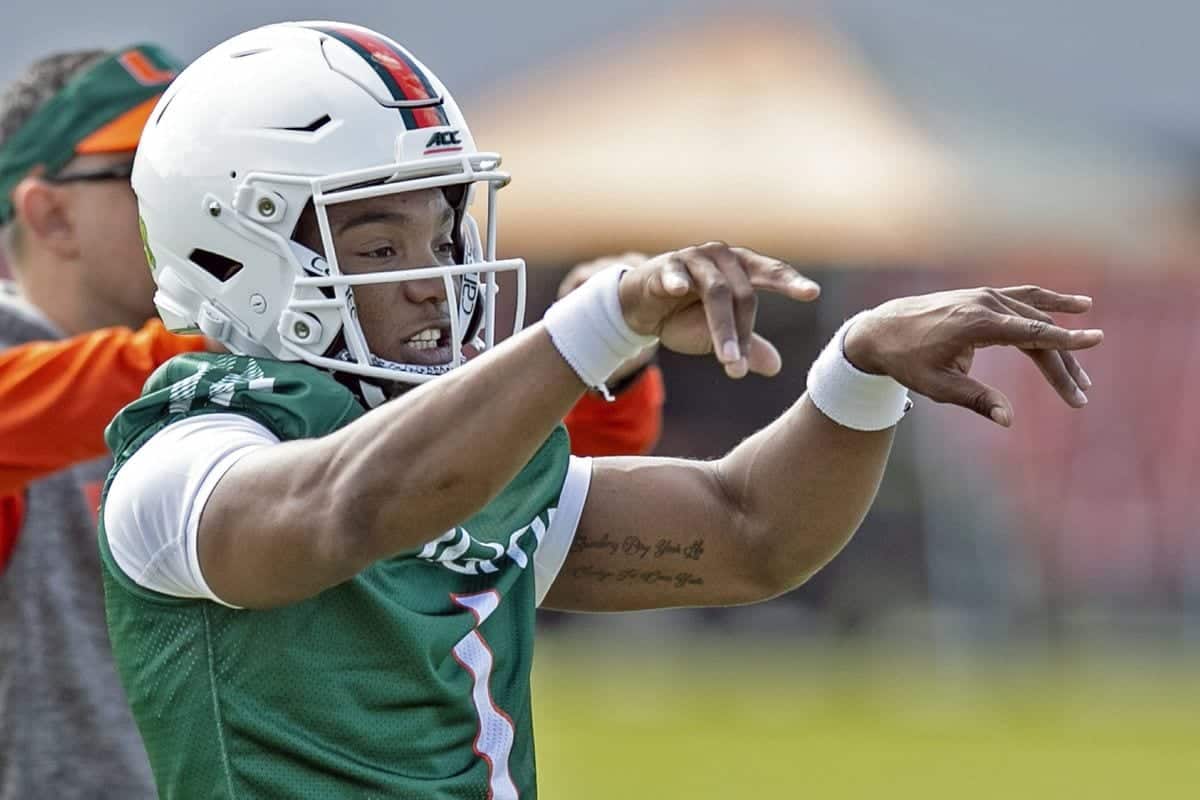 The Miami Hurricanes have experienced their fair share of offensive failures recently, causing tremendous turnover within the coaching staff. One of the main reasons for their struggles is inconsistency at quarterback and the lack of a top prospect. That will change in 2020 with the arrival of Houston transfer and dynamic dual-threat D’Eriq King.

Miami hopes that King is the answer to all of their offensive woes and could spark a revival of the downtrodden Hurricanes in the ACC Coastal division. At the same time, the Hurricanes offer some tremendous speed and ability at the skill positions that could help enhance King’s draft stock.

Below, I will analyze three reasons why King’s arrival could boost the Hurricanes program in 2020 while making him a legitimate quarterback prospect heading into the 2021 NFL Draft.

The last time the Hurricanes had a legitimate NFL Draft prospect at QB was when Brad Kaaya was setting an all-time career passing record with 9,968 yards for Miami as a three-year starter. However, Kaaya surprisingly turned pro after his junior year and was met with underwhelming draft success. After a long and painful wait, he was ultimately selected by the Detroit Lions in the sixth round of the 2017 NFL Draft.

Kaaya saw time with the Lions, Colts, and Bengals before spending most of the 2019 season out of the league. While he may fit the mold more as an NFL prototype, King offers a far better skill set and versatility as a passer and runner and could be selected much earlier than his predecessor.

King’s exceptionally underrated as a thrower and should get a chance to showcase that in 2020 under new offensive coordinator Rhett Lashlee. PFN’s A.J. Schulte recently expanded on King’s arrival and fit in Lashlee’s offense.

Kaaya offered little to no ability as a runner, while King has racked up 1,421 rushing yards in four years as a Cougar. He is a great improviser with a lively arm that could be likened to someone like Russell Wilson at the next level.

King is also a dynamic, home run hitter on the ground and can take it the distance at any time, as shown in the video below.

No other player has an active streak longer than 3 games. pic.twitter.com/gDhbXaPmjj

Miami’s duo of N’Kosi Perry and Jarren Williams has not gotten it done at the QB position in the previous two seasons. The team was rich in defensive and skill position talent, but that consistency and playmaking ability from the quarterback spot held them to disappointing finishes as a team.

All that changes in 2020, as the Hurricanes finally have a bonafide threat behind center and one that could win them the ACC Coastal division. When you go down the list of top-end quarterback prospects in the ACC, it all starts with Clemson’s Trevor Lawrence. However, the Hurricanes will not have to play the Tigers during the regular season and do not belong to the Atlantic division.

The Coastal division features a few talented passers in North Carolina’s Sam Howell and Pitt’s Kenny Pickett, but neither is as accomplished, experienced, or as dynamic as King. Health permitting, King should have Miami playing in the ACC Championship game in December, and that momentum should carry him favorably into the 2021 NFL Draft.

King enhances the ability of all offensive players

The Hurricanes ranked 120th overall in rushing yards per game in 2019, which is extremely uncharacteristic of this proud Miami team. Miami has produced solid draft talent at the running back position in recent years with guys like Lamar Miller, Duke Johnson, Travis Homer, and DeeJay Dallas. But that individual success has not translated to a consistently great running game for the Hurricanes.

King’s arrival as a transfer should help jump-start this running game in 2020 in a big way, and could even have a Lamar Jackson-type effect on this offense. Since entering the lineup in 2018, Jackson has helped the Ravens finish in the top two in rushing yards per game in the last two seasons. The former Houston transfer, King, will have a similar impact with Miami in 2020.

Through play-fakes, RPOs, and designed quarterback runs, the running game should flourish under King and new RB starter Cam’Ron Harris. This Miami football team will return to the type of rushing success they experienced in their glory days under great runners like Edgerrin James, Frank Gore, and Willis McGahee. In turn, that success should garner King the type of attention that lands him in the 2021 NFL Draft, as early as the third or fourth round.