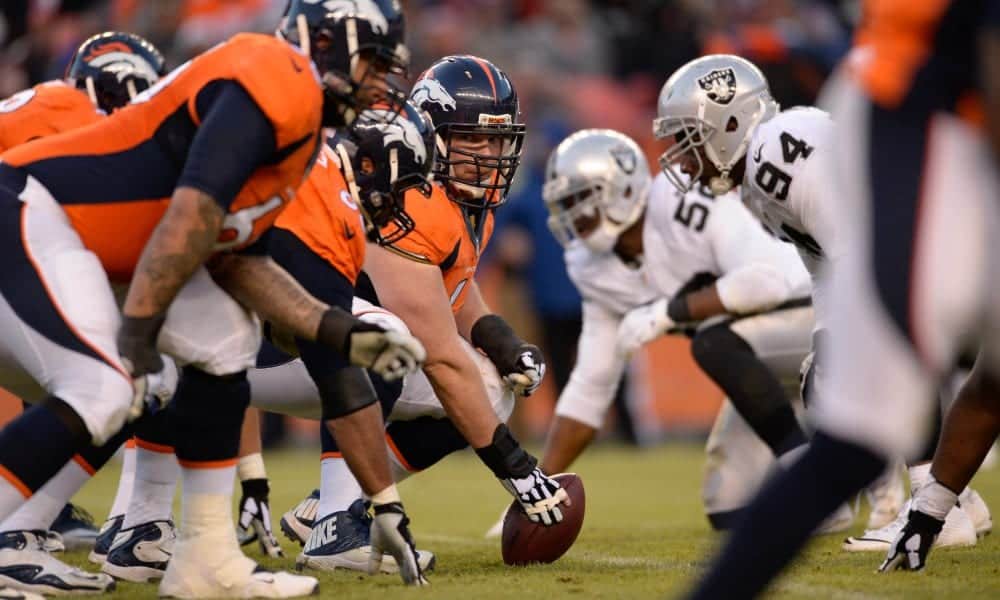 The Denver Broncos and Las Vegas Raiders rivalry is one of the more storied ones across the National Football League and one that isn’t short of mutual disdain for one another.

Las Vegas holds the advantage in the Broncos-Raiders rivalry with a record of 65-54-2, but over the last two decades, the Broncos hold a sizable 25-15 advantage. Now, with both teams primed to be in the playoff conversation in 2020, the rivalry has more on the line now than it’s had in a long time.

As both teams enter the next stage of their rebuild in 2020, the two matchups between the teams have the potential to set the tone for what will happen over the next decade of this rivalry.

How the off-season additions improved the AFC West

Across the NFL, fewer teams improved the overall composition of their roster more than Las Vegas and Denver did, which is sure to add some more fire to the Broncos-Raiders rivalry.

The Raiders kicked off free agency by adding a pair of linebackers, Cory Littleton and Nick Kwiatkoski, which should upgrade what was widely considered as one of the Raiders’ greatest defensive weaknesses a season ago.

Kwiatkoski is a hard-nosed, downhill run defender, that, when paired with Raiders’ defensive line, should make it more difficult for opposing offenses to gain yards on the ground. Littleton was one of the better, underrated coverage linebackers in the NFL over the last two seasons, making the Raiders’ revamped linebacking duo a strong pairing.

Agholor’s struggles in Philadelphia have been well-documented, but he could turn things around in Las Vegas, as he did succeed when asked to be a cog in the machine of the offense, rather than the centerpiece. Ruggs will add an element of rare top-end speed to the Raiders offense and has the ability to turn any play into a quick touchdown if he finds an open seam. Lastly, Edwards was one of the draft’s most underrated receivers, and while injuries are a concern, he consistently dominated SEC defenses with his size and physicality and will look to do the same at the next level.

Much like the Raiders did, the Broncos also added several weapons for their quarterback to work with, in the NFL Draft. Following Vegas’ selection of Ruggs, the Broncos drafted his Alabama teammate, Jerry Jeudy 15th overall. Then, in the second round, to counter Ruggs’ speed, Denver added speed of their own with K.J. Hamler.

Like Ruggs will do for the Raiders, Hamler will provide the Broncos with an element of rare speed that is incredibly hard to find in the NFL, and the offense will benefit as a result, even if his playing time is limited. Meanwhile, Jeudy is primed to be a day one starter opposite of Courtland Sutton. Despite the truncated off-season, because of his polished route running and advanced football IQ, Jeudy is as pro-ready as any player from this year’s draft.

On defense, the Broncos added their own highly-touted duo, though they acquired theirs via trade. First, they landed A.J. Bouye for a fourth-round pick to help replace the loss of veteran Chris Harris Jr. after he signed with the division rival Chargers. Bouye should return to being one of the league’s top-20 cornerbacks in Fangio’s scheme, which fits his physical style of play perfectly.

Next, the Broncos upgraded their defensive line and interior pass rush by trading a seventh-round pick to the Titans in return for perennial Pro-Bowler Jurrell Casey. The addition of Casey means the Broncos enter the season having one of the league’s deepest defensive lines and an unparalleled stable of pass rushers with Von Miller, Bradley Chubb, Shelby Harris, Dre’Mont Jones, McTelvin Agim, Jeremiah Attaochu, and Malik Reed also pressuring the quarterback.

How the Broncos can beat the Raiders

In order to get two key wins against the Raiders in the race for a wildcard spot, and potentially a division title, the Broncos will need an airtight gameplan on both offense and defense.

The best way to attack the Raiders’ defense is through the passing game, and the Broncos have the weapons to do so.

The rookie quartet of Jeudy, Hamler, Albert Okwuegbunam, and Tyrie Cleveland will join the lineup that already features pass-catchers like Sutton, DaeSean Hamilton, and Noah Fant. All three of which finished with an Offensive Share Metric grade north of 30, putting them in the range defined as “very good”.

Having young, proven weapons as well as the promising, yet untested rookies in one receiving core is sure to put immense pressure on any secondary, especially one as poor as the Raiders’, which allowed the eighth-most yards through the air in 2019.

While the Raiders improved their secondary during the off-season, Lamarcus Joyner can cover in the slot, but late free-agent signing Prince Amukamara doesn’t have the athleticism at this stage in his career to slow down the size and explosiveness of a receiver like Sutton. Trayvon Mullen doesn’t quite have the top-end speed, quick feet, or experience to hang with a route runner as polished as Jeudy throughout the course of the game.

On the inside, Jonathan Abram didn’t display the type of coverage ability in college that can hang with athletic tight ends like Fant, and Damarious Randall has a size disadvantage when it comes to matching up with Broncos star tight end.

If Broncos offensive coordinator Pat Shurmur spreads out the Las Vegas secondary and puts extra pressure on them, it might just be enough to give Denver the edge in the Broncos-Raiders rivalry.

Last year’s Raiders offense was built on two foundational pillars, those being Josh Jacobs’ rushing ability and the matchup nightmare with Darren Waller. Even though the Raiders rejuvenated their offense with a bunch of high-profile off-season additions, those pillars remain the same, and if the Broncos want to stop the Raiders offense, that’s where their focus needs to be.

Denver was unable to slow down either of the Raiders’ primary weapons last season, which is a key factor as to why the Broncos barely scraped by going 1-1 in the season series. In their first matchup, Jacobs gained 113 yards from scrimmage and scored twice, while Waller hauled in a team-leading seven receptions for 70 yards. Jacobs was injured for the Week 17 rematch, but the Raiders run game still found a way to pick up 97 yards on the ground, and Waller improved on his Week 1 performance, tallying six receptions for 107 yards.

As evidenced by those numbers, stopping Waller and Jacobs is a task that is easier said than done, but at the bare minimum, the Broncos will have to slow them down in order to beat the Raiders as they continue their rivalry.

If Waller and Jacobs start churning, it will force the Broncos to send more defenders into the box to try and slow them down, leaving their cornerbacks in one on one situations against two of the more dangerous deep-ball receivers in the league, in Tyrell Williams and Ruggs. That is not a situation the Broncos will want to put their secondary in.

Matchups where the Broncos have the advantage

Denver will have to take advantage of their edge rush during both matchups in order to have a chance to take control of the Broncos-Raiders rivalry in 2020.

Miller has consistently gotten the best of Kolton Miller in their past matchups, and that trend should continue but be more apparent, with Casey next to him pressuring against veteran Richie Incognito at guard. With Casey and Miller attacking the weaker half of the Raiders offensive line, Carr will find it more difficult to trust his blindside.

Noah Fant has a matchup advantage against the Raiders’ safeties

The rare combination of size and speed make Fant a matchup problem for any defense, but that’s especially true for the Raiders, who will have to rely on Abram and Randall to slow him down. Randall’s 5’11, 196-pound frame means that he’ll face a disadvantage covering 6’4, 249-pound Fant. Abram is more of a downhill, hard-hitting box safety than an elite cover safety. Either way, Fant should be able to gain separation consistently.

Courtland Sutton is too much for Las Vegas’ cornerbacks to handle

As the depth chart currently sits, the Raiders could task Amukamara with the job of covering Sutton, which should favor the Broncos number one receiver. Amukamara had a hard time keeping pace with vertical receivers last season and relied on his ability to play physical with WR’s. For the Raiders, getting hands-on with Sutton will be difficult, considering how physical he became last season. Plus with his ability to make catches that are heavily contested, Amukamara lacks the overall advantage in this matchup.

Matchups where the Raiders have the advantage

When the Broncos square off with the Raiders, they’ll need to prepare for the following matchups where the Las Vegas will have the edge.

In last year’s matchups, the Broncos were able to find some success against the Raiders on the ground combining for 165 yards over two games, but that task will be tough in 2020. Kwiatkoski and Littleton are two enforcers that each finished among the top four tacklers on their respective teams a season ago, and Kwiatkoski did it while only starting eight games for the Chicago Bears. Given the Raiders’ strong defensive line, don’t be surprised if they become one of the league’s fiercest run defenses in 2020.

Denver has struggled against Darren Waller

The Broncos had no answers for slowing down Waller last season. The Broncos’ lone hope is that Kareem Jackson, now in a solidified role at safety, can be the difference-maker, considering that his position was still in flux during 2019’s first installment of the Broncos-Raiders rivalry, and he was suspended for the second bout.

The Raiders’ arsenal of pass-catchers on paper, doesn’t compare to that of Denver’s, but what the Raiders do have is one of the league’s better deep threats with Williams and Ruggs. While Bouye should be able to hold his own against one of those two options on the field side, the boundary corner will be responsible for slowing down the other options. The Broncos will rely on the back-end of their secondary to avoid big plays down the field.

The Broncos will meet the Raiders in Week 10 and Week 17 of the 2020 regular season.