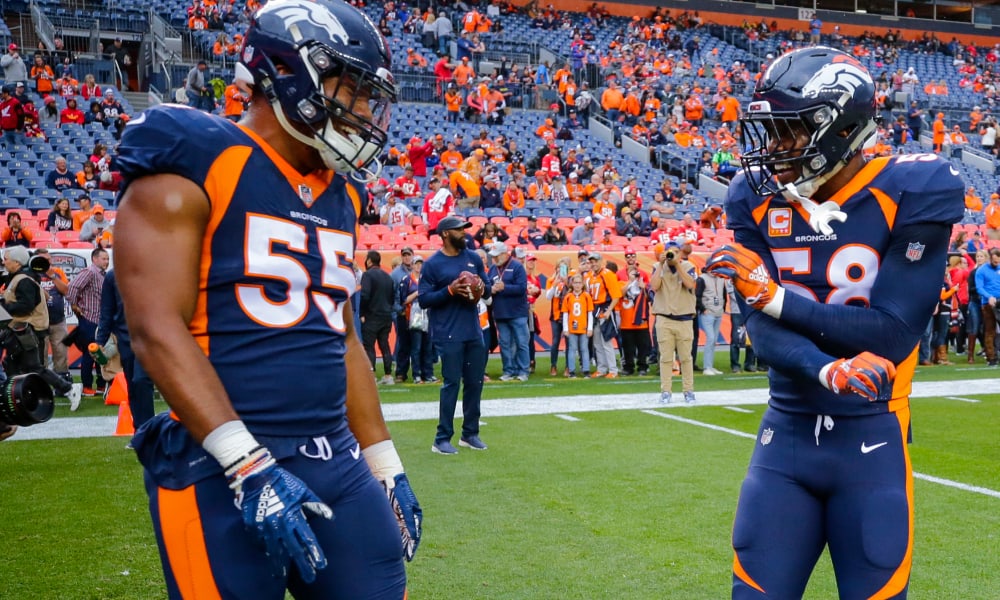 (AP Photo/Jack Dempsey, File)
What's in this article? Click to show
How has the edge rusher position changed over time?
Bradley Chubb represents the Broncos on the back-end of Williamson’s top edge rusher rankings for 2020
Von Miller eager to take the next step as a leader in 2020

With the NFL season kicking off in just four weeks, Pro Football Network Senior NFL Analyst Matt Williamson is identifying the top 25 players at each position. In Williamson’s latest article, he highlighted his top 25 edge rushers for 2020, and two members of the Denver Broncos made the list. Despite the amount of talent at the position across the NFL, Williamson featured both defensive ends and outside linebackers within the criteria of his rankings. Where did the two Broncos representatives sit in Williamson’s rankings?

How has the edge rusher position changed over time?

The role that edge rushers play for their respective teams has become a spotlight within the NFL. As the game evolves rule-wise to favor opposing offenses, edge rushers have faced a more difficult time getting to quarterbacks. Common in today’s NFL, offensive coordinators now implement quick-passing schemes to counteract talented pass rushers. This has been something that the Broncos have experienced throughout the last three seasons, following Von Miller’s dominant 2015 season that culminated in him being named the MVP of Super Bowl 50.

In 2015, Miller and the Broncos edge rushers were able to generate consistent pressure against opposing offenses. Still, Denver also had a versatile secondary on the back-end that possessed the traits to cover opposing wide receivers man-to-man. Over the last three seasons, the Broncos have lost some of those members within the secondary, and have had to rely on youth to fill in the gaps. Despite Miller and Bradley Chubb’s efforts in both 2018 and 2019, opposing team’s found success neutralizing the Broncos pass rush by getting the ball out of the QB’s hands quickly against Denver’s young secondary.

In Williamson’s rankings, Chubb comes in at number 24, just ahead of San Francisco 49ers’ defensive end Dee Ford. When comparing Chubb and Ford’s roles for their teams, the scheme is a strong factor. The 49ers run a 4-3 scheme where the DE plays in a wide-nine technique to the offense’s strong side. In contrast, the Broncos run a 3-4 scheme where edge rushers typically play in a 5-technique if there isn’t a tight end to their side and a 7-technique with a TE.

Chubb’s ranking on this list is understandable, considering that he missed a majority of 2019 after tearing his ACL against the Jacksonville Jaguars in Week 4. His off-season rehab has gone according to plan, and he is on schedule for Week 1 against the Tennessee Titans.

Prior to tearing his ACL last season, Chubb played with an evident motor within head coach Vic Fangio’s defense. Even though Chubb and the Broncos registered their first sack of the season against the Jaguars in Week 4, his on-field presence was notable, despite playing against team’s that schemed to get the ball out of the QB’s hands quickly.

What did Williamson say about Chubb?

Williamson noted that Chubb’s injury was one of the factors that impacted his placement within his position ranking. “As early draft picks go at this position, Chubb doesn’t leap out as a premier athlete. And he is coming off an injury, which doesn’t help his stock in these edge rusher ranks that are incredibly competitive. Still, Chubb has already proven to be a high impact player, and he should get back to that right away. Remember, he did have 12 sacks as a rookie.”

When you look at Chubb’s play and Relative Athletic Score (RAS), then it seems unfair to label him as less than a premier athlete. He has a strong first step off the line of scrimmage and registered an “Elite” RAS when entering the league. Fangio clearly has plenty of faith in Chubb, as he utilizes him as a strength rusher, similar to the role Chicago Bears OLB Khalil Mack played for Fangio in 2018.

Miller is coming off of an eight sack season in 2019, his second season in his ten-year career where he did not post a double-digit sack total. However, when it comes to Mack’s ranking, Williamson documented the lack of help around Mack last season.

“Somewhat like Von Miller, Mack had a “down year” by his insane standards with just 8.5 sacks. But his tape is as dominant as ever. In reality, Mack got very little help last year. His all-around game is really special, with a fantastic array of pass-rush moves. He should go down as one of the premier defensive players of this generation. Don’t expect anything less than an elite season from Mack in 2020, which is why he is the top edge rusher in the NFL.”

The same argument could be made for Miller, who didn’t have as much help opposite of him once Chubb was lost for the season. On film, Miller still played at an elite level against the pass and the run but saw consistent double teams and chips from TEs and running backs. Miller recently reflected on where he is at, entering the 10th season of his career in the NFL.

“Really, all I can focus on is the process. Coming in and making sure my hands are clean, going to work, and working as hard as I possibly can. Getting off work, washing my hands again, and showering as fast as possible. Getting back into my playbook, leading the guys, and whenever the opportunity presents itself, I have to take advantage of it, and I can’t shy away from anything.”

“This is Year 10 for me, and if there is any other time for me to do it, it has to be now in spite of all the obstacles that we have around us. We have to find a way to adapt, overcome, and achieve the goal of bringing the Broncos back to where we need to be and being the leader that I need to be.”

In this article:Bradley Chubb, Von Miller