NFL training camps are now underway around the league as teams begin ramping up to the 2020 season. With the college football season starting to take more of a defined shape after several big conferences canceled their fall seasons, PFN draft expert Matt Valdovinos took a look at what the 2021 NFL Draft may look like. We break down his picks in this Denver Broncos early 2021 three-round mock review. While this season will be vastly different from any other season in league history, the NFL Draft is something that even the current global situation could not stop. In Valdovinos’ mock draft, he gives the Broncos two key defensive players and a possible replacement for Garett Bolles at the left tackle position.

As Valdovinos’ points out in his mock draft, the Broncos are set with their offensive weapons after selecting Penn State wide receiver K.J. Hamler and Alabama’s Jerry Jeudy with their first two picks of the 2020 NFL Draft. The Broncos acquired cornerback A.J. Bouye from Jacksonville, but still lack a true starting corner to play opposite Bouye. Bryce Callahan is one of the league’s best slot defenders, but with the need for another outside corner, Valdovinos has the Broncos selecting Alabama CB Patrick Surtain II with their first selection in 2021.

As one of the top CBs in this draft class and the son of a former NFL player, Surtain II could fill that need for Denver. He carries ideal size and weight for the position and can stay hip-to-hip with receivers downfield. His physical attributes are all there, but it’s the mental attributes that make Surtain II an ideal draft selection in 2021. He utilizes his mental processing skills with precision and translates it well into his game.

How does Surtain II fit into the Broncos defense?

As previously stated, Surtain’s mental skills are just as good of an attribute as his physical tools. He remains extremely patient and isn’t in a rush to get physical with receivers through their routes. Surtain II routinely uses the sideline as his best friend and can force receivers to the boundary, forcing the quarterback to make a more difficult throw. These are traits that can fit well into head coach Vic Fangio’s defensive scheme, where he won’t necessarily be tasked with having to be physical with receivers.

His physical tools are not to be slept on, however. With his height, length, and speed, Surtain can keep up well with receivers if tasked with playing in man schemes. He plays the ball exceptionally well in the air and remains aggressive, trying to attack the ball when the ball carrier is in his vicinity. If he can show a willingness to get more physical and disciplined in his tackling, he will make for a perfect fit in the Broncos defense and a long-term solution to their current lack of star power at the position.

In the 2020 NFL Draft, the Broncos attempted to trade back into the first round of the draft to select LSU linebacker Patrick Queen to boost their linebacker corps, but couldn’t get a deal done. Instead, the team waited until the fourth round to pick Wake Forest’s Justin Strnad, who will compete for a role on the Broncos defense as a rookie. In his 2021 NFL mock draft, Valdovinos makes sure the Broncos get a linebacker early in North Carolina’s Chazz Surratt. Let’s review how the Broncos second-round pick in this early 2021 three-round mock improves this team.

The former quarterback is still new to the position, but he can become one of the best linebackers from this class that features some top-end talent like Penn State’s Micah Parsons and Alabama’s Dylan Moses. With great athleticism and a lot of room to grow, Surratt would be a great candidate to continue Fangio’s excellence with the linebacker position.

Will Surratt be ready to start for the Broncos?

If the Broncos were to select Surratt in the second round, they would likely do so to replace Todd Davis, who will hit unrestricted free agency in 2021. The biggest question for Surratt coming into the 2021 season would be his readiness to assume the starting role for the Broncos. While he has the physical tools and the football IQ to be the starting linebacker opposite Alexander Johnson, his lack of experience playing the position could hold him back.

However, given Fangio’s success with molding linebackers, Surratt would have a smooth transition into the league. He already possesses the physical traits, and his experience at quarterback gives him an advantage when dropping into the passing lanes. If he can put it all together and get paired with Fangio and defensive coordinator Ed Donatell, Surratt could perhaps turn into an early starter and could even be the best player from this position group in the 2021 class.

With Ja’Wuan James opting out for the 2020 NFL season, the offensive tackle position for the Broncos became a bit more problematic. Elijah Wilkinson was supposed to be battling the former first-round pick Bolles for the starting left tackle spot, but will instead be taking over duties as the starting right tackle with James out. Bolles, whose fifth-year option was not picked up by the Broncos, is fighting to earn his second contract with the team, but after several poor-performance seasons, he has an uphill fight ahead of him. Whether or not Bolles does secure that second deal with the team, it would not be a surprise if the Broncos invested an early draft pick into a tackle.

Related | Reviewing the Denver Broncos offensive line for the 2020 season

Valdovinos did just that when he had the Broncos selecting OT Landon Young out of Kentucky. While Young may not be seen as a Day 1 replacement for Bolles at left tackle, he can make for an interesting developmental tackle for offensive line coach Mike Munchak. Young has a massive frame at 6’7″ that could still use some more weight to it, and he has shown effectiveness in the run game, where Kentucky’s offense has thrived in recent years with players like Benny Snell and Lynn Bowden.

What could Young’s role look like if the Broncos re-sign Bolles?

With Young being more of a developmental tackle still needing quite a bit of work in his pass protection technique, it wouldn’t be a surprise if the team held onto Bolles or Wilkinson at the left tackle spot for an extra year. Bolles’ struggles have been widely noticed and criticized by fans, and the team made a statement by declining his option and forcing him to compete for the spot that he’s had for the last three seasons.

However, while he has struggled, Munchak’s impact on Bolles showed late in the season when he played some of the best football of his short career. If Bolles shows decent improvement this season, it may be enough for the team to at least bring him back on a short-term contract while they develop his replacement.

As mentioned, Young’s pass protection technique is what needs the most work right now, and we will likely see his progress this season if the SEC plays football. He works more efficiently in the quick passing game, but he’s got to be able to work better on longer developing plays. Munchak will have his work cut out for him, but that’s the reason Denver made it a point to bring him aboard and why, upon review, this pick makes sense for the Broncos in this early 2021 three-round mock. 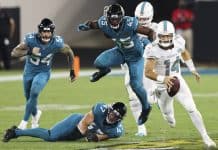 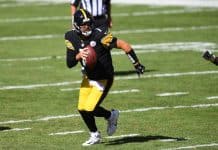 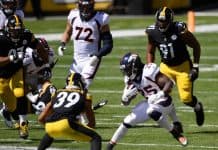