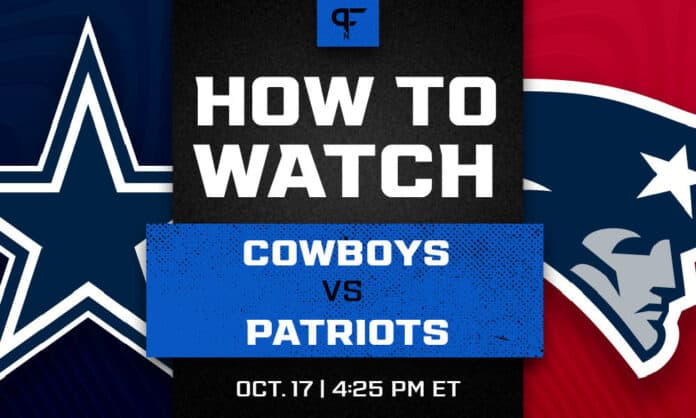 Cowboys vs. Patriots prediction, pick, odds, and how to watch the Week 6 game

Heading into Week 6, what are our predictions for Cowboys vs. Patriots, what are the latest odds, and what channel can you watch the game on?

The Cowboys vs. Patriots game is an interesting NFC vs. AFC clash. These two teams seem to be heading in different directions, with the Cowboys leading the NFC East and the Patriots hovering around the bottom of the AFC East. Let’s take a look at the current NFL odds, some picks, predictions, what channel you can watch, and where you can listen to the Cowboys vs. Patriots matchup.

The Dallas Cowboys look like they have returned to their pre-Dak Prescott injury form from 2020. They are averaging nearly 40 points per game, and Dak has been nothing less than spectacular. However, what has been most impressive is the team’s ability to perform both on the ground and in the air. RB Ezekiel Elliott has 452 rushing yards and 5 scores, while Tony Pollard has 325 rushing yards.

With a solid rushing attack, the Cowboys have been able to capitalize downfield. Prescott has thrown for 1,368 yards and 13 touchdowns. Meanwhile, WRs CeeDee Lamb and Amari Cooper each have 300+ receiving yards on the season. Dallas’ versatility on offense has made them one of the most dynamic teams to watch this year.

The new-look Patriots have had an up-and-down season so far. They have had moments where they seem to have everything figured out — but they struggled against the Texans in Week 5. Mac Jones has been serviceable, with 1,243 yards, 5 touchdowns, and 5 interceptions. But the defense has taken a step back compared to 2020.

Does Dallas have too much firepower for New England?

I like Dallas to get the road win in this one. They have spent the last three games at home and should be well-rested heading into New England. Jones will likely make one or two mistakes, and the way this Cowboys defense is playing, that could spell the end for the Patriots.

How to watch and listen to Cowboys vs. Patriots this week