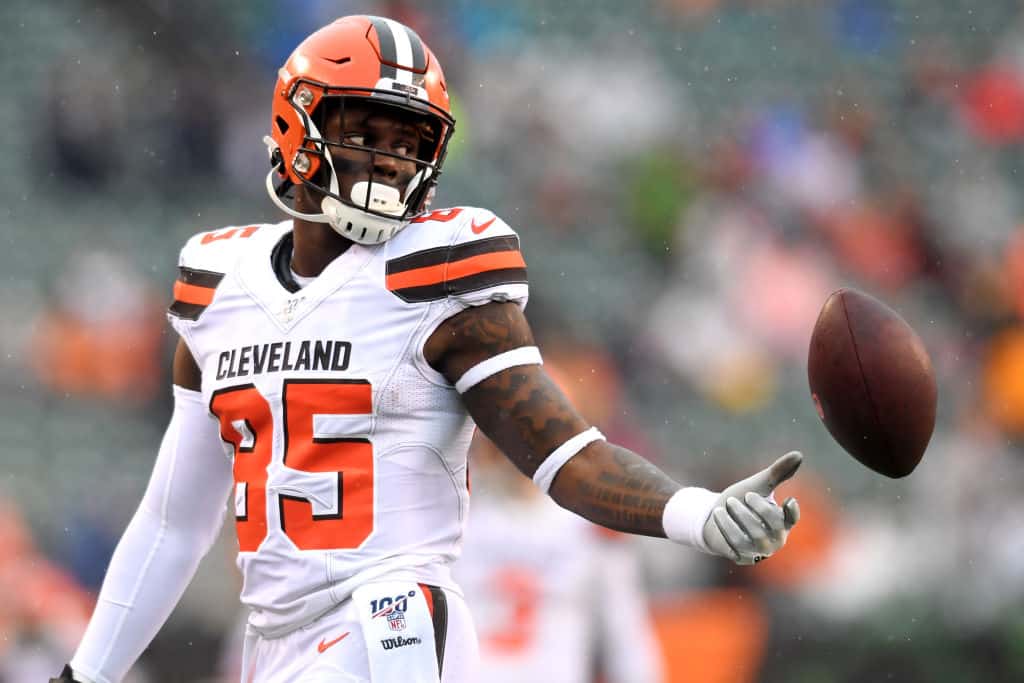 CINCINNATI, OH - DECEMBER 29, 2019: Tight end David Njoku #85 of the Cleveland Browns warms up prior to a game against the Cincinnati Bengals on December 29, 2019 at Paul Brown Stadium in Cincinnati, Ohio. Cincinnati won 33-23. (Photo by: 2019 Nick Cammett/Diamond Images via Getty Images)
What's in this article? Click to show
David Njoku rejoins the Cleveland Browns after being activated off Injured Reserve
How does David Njoku fit into a crowded Browns tight end room?
Can David Njoku become a fantasy relevant tight end?
Want more fantasy football analysis and news?

On Wednesday, the Cleveland Browns announced they are activating tight end David Njoku off injured reserve and back to the 53-man roster. The news of added help to the Browns’ offense couldn’t come at a better time after just losing running back Nick Chubb for six weeks. While the team will need to get Njoku up to speed, fantasy football managers will need to decide if acquiring the talented tight end is smart. After requesting a trade earlier in the season once the team acquired Austin Hooper, how often will the Browns use Njoku going forward? And what is David Njoku’s fantasy outlook for the remainder of the 2020 season?

David Njoku has missed the team’s three most recent games with a knee injury. Cleveland placed him on Injured Reserve (IR) following a Week 1 loss to the Baltimore Ravens. He had three catches for 50 yards and a touchdown before leaving the game.

The move opens up a 21-day window during which the Browns can evaluate Njoku in practice, but he isn’t expected to require the full period before Cleveland adds him back to the 53-man roster.

Related | Is D’Ernest Johnson worth a fantasy pickup after Chubb’s Injury?

Since Njoku has already missed Cleveland’s last three games, he’ll be eligible to play Sunday against the Indianapolis Colts, assuming his sprained knee responds well to practice. Given the new rules for the IR that were put in place this year, this was the minimum that Njoku could have sat out after being initially placed on the IR.

The problem for Njoku and the Browns tight ends as a group is this is a brutal matchup. The Colts are the best team in the NFL against the tight ends in fantasy, only allowing 0.82 PPR points per target. The Colts have allowed just 11 receptions for 71 yards to tight ends. Even at full strength, Njoku could be someone who disappoints eager fantasy managers in his first week back in the lineup.

How does David Njoku fit into a crowded Browns tight end room?

Even at full strength, Njoku faces an uphill battle for targets as the Cleveland tight end group might be one of the team’s deepest positions in the NFL.

First, the team added former Atlanta Falcon Austin Hooper to the team during free agency. Hooper is coming off his best game of the season, a five-catch, 34-yard, one-touchdown outing against the Dallas Cowboys. However, his run blocking has been one of the best assets he has brought to the team, and one of the reasons he sees an 84% snap share.

Related | Start/Sit, Week 5: Is Brady still an every week starter for fantasy football?

The more surprising player has been Harrison Bryant, the Browns fourth-round pick out of Florida Atlantic. Even before Njoku suffered a Week 1 injury, Bryant played himself into a sizable amount of first-team reps with a strong training camp. Bryant caught seven passes for 59 yards and a touchdown in Cleveland’s first four games.

The rookie did most of that damage with four catches and 37 yards in Cleveland’s 49-38 victory over the Cowboys in Week 4.

The Browns have yet to find a stable WR3 on their team, and 12 personnel usage opens up more volume for the tight ends. Now they have to attempt to find a way to work Njoku into this rotation as well. A first-round pick in 2017, Njoku has recorded 96 receptions for 1,116 yards with 10 touchdowns in 37 career games.

I think David Njoku’s fantasy relevance can return, but it might only be in deeper leagues. Cleveland, even without Chubb, is going to be a run focused team. It has gotten them off to a 3-1 start, and there is no reason to switch from that now. Especially in his first game back, against a brutal matchup, we need to temper expectations on Njoku for at least Week 5. Using this first week to see how and when they choose to use him on the field might be the best course of action.

Related | What do we do with Kenyan Drake in fantasy football moving forward?

Njoku is one of the most athletically gifted tight ends in the NFL, and I could see the team choosing to use him in more of a big slot role. The team won’t be able to spread Kareem Hunt all around the field anymore with Chubb gone and will have to use other players on the team, and Njoku makes perfect sense to fill that role. I expect to see Hooper lining up inline, where he has on 71% of his snaps, and the team use Bryant and Njoku in the slot, giving them an opportunity for fantasy points down the road.