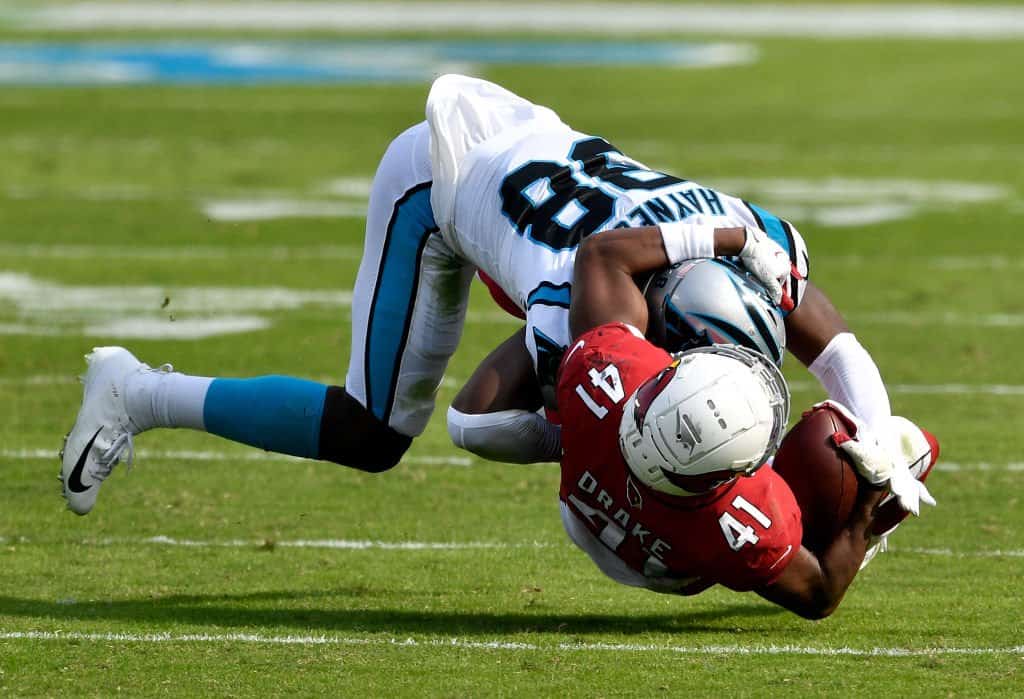 CHARLOTTE, NORTH CAROLINA - OCTOBER 04: Myles Hartsfield #38 of the Carolina Panthers tackles Kenyan Drake #41 of the Arizona Cardinals during the second half of their game at Bank of America Stadium on October 04, 2020 in Charlotte, North Carolina. The Panthers won 31-21. (Photo by Grant Halverson/Getty Images)
What's in this article? Click to show
If Kenyan Drake was ever going to get it going, it should have been against the Panthers
Chase Edmonds is more than just a backup running back
What should fantasy managers do with Kenyan Drake moving forward?
Want more fantasy football analysis and news?

After on offseason of hope and hype based on the end of the 2019 season, few players have disappointed like Kenyan Drake. I will fully take the blame on this because I was upfront leading this charge. Drake was my RB7 in fantasy football, and just as recently as last Friday on PFN’s Moneyline & Wine show, I called Drake a top play for the week.

You can make a strong argument that through four weeks, Drake is the biggest disappointment in all of fantasy. I certainly would not argue against that side. What has gone wrong, and what do we do with Kenyan Drake in fantasy moving forward?

If Kenyan Drake was ever going to get it going, it should have been against the Panthers

I’m sorry. I don’t even know what else to say at this point. If there was a mountain top in range, I was on it shouting about Drake that he would be the man this week. This was the week that patience would be rewarded for all of those who have stuck by his side as I have. I am not someone who recommends one thing and does something else. What I am pushing out is what I am doing on my own teams as well. How did that serve us this week? How about 13 carries for 35 yards.

Oh, sorry, were you expecting more? No, that honestly is all.

He didn’t even see a single target in the passing game. It just doesn’t make sense as this should have been when he should have taken off, just like every other running back who plays the Panthers.

Related | Is D’Ernest Johnson worth a fantasy football pickup after Chubb’s Injury?

Entering Week 4, the Panthers, through their last 19 games, had allowed 34 rushing touchdowns, including seven of them in their first three games this year. They had allowed 1.23 PPR points per opportunity, and Drake hasn’t had fewer than 18 opportunities in a game yet. They had given up the third-most fantasy points per game to opposing running backs as well. Literally, every single stat screamed to play Drake, who was averaging 4.1 yards per carry.

One thing that is worth mentioning is that during the game, Drake exited with what was called a chest injury. ESPN’s Adam Schefter reported that Drake got the wind knocked out of him and was back to practice on Monday.

One of the most significant issues we see in limiting Drake’s fantasy upside is his complete alienation from the passing game. He has only seen five targets all season. It makes it even stranger when you see that Drake was on a 16-game pace of 70 targets through the eight games he played after joining the Cardinals via trade last season.

Chase Edmonds is more than just a backup running back

Here is where we find one of the major limiting factors for Drake in fantasy this year. Yes, he has been getting the rushes, but the ceiling is capped without any passing work. All of that has been going to Chase Edmonds.

Kenyan Drake: 67 rushes for 254 yards and one touchdown. Five receptions on five targets for 20 yards.

Edmonds has absolutely dominated the passing game between the two. In fantasy, especially PPR, not all touches are created equal with a larger expected point per touch total going towards receptions and targets rather than a carry.

Waiver wire claims are being submitted today, and Edmonds needs to be at the top of the list. The fact that he’s on pace for 68 targets on the season and already has two receiving touchdowns tells us that he has weekly playability. He is currently avaliable in 76.4% of fantasy leagues.

What should fantasy managers do with Kenyan Drake moving forward?

You have to play him right now but know his current value is that of a mid-RB2. His value is so low right now that selling for pennies on the dollar wouldn’t be worth it, and the upside that he has (yes, there still is some) makes it difficult to leave him on your bench.

I am giving Drake one more shot to gain my trust this week as the Cardinals travel to play the New York Jets. If he has a game like he just did against another team in the bottom five against the run, I can’t put any trust in him until we see something change.

If you are a contender and can ship off a piece and grab Drake as a bench stash, I am sure his current manager could use the production while you wait for a potential late-season resurgence just in time for bye weeks of the playoffs. Until that point, let’s just hope he gets out of MetLife Stadium in one piece.