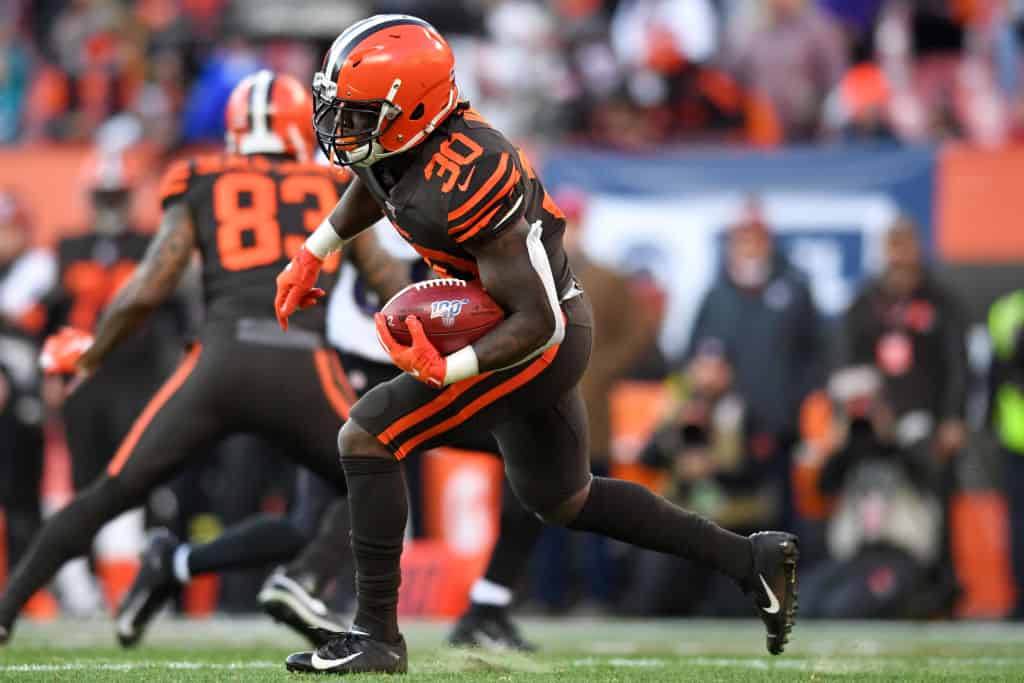 CLEVELAND, OH - DECEMBER 22, 2019: Running back D'Ernest Johnson #30 of the Cleveland Browns returns a kickoff in the fourth quarter of a game against the Baltimore Ravens on December 22, 2019 at FirstEnergy Stadium in Cleveland, Ohio. Baltimore won 31-15. (Photo by: 2019 Nick Cammett/Diamond Images via Getty Images)
What's in this article? Click to show
Nick Chubb has an MCL sprain and will miss at least six weeks
D’Ernest Johnson and Kareem Hunt will have to step up for the Browns to have success
How much faith should you put in D’Ernest Johnson’s fantasy outlook moving forward?
Want more fantasy football analysis and news?

Another week, another massive injury. This time it’s the Cleveland Browns and star running back Nick Chubb. After coming less than 50 yards away from the rushing title in 2019, early indications are that Chubb will be out several weeks, possibly until late November. With fantasy football managers now scrambling for a backup plan, eyes are shifting to D’Ernest Johnson, who filled in admirably during the Browns’ victory against the Dallas Cowboys. Is Johnson worth a fantasy pickup after Chubb’s injury?

Browns Head Coach Kevin Stefanski announced that Nick Chubb suffered an MCL injury in Sunday’s win over the Cowboys, and he will go on injured reserve. The team does expect Chubb back at some point in the 2020 season and luckily avoided needing surgery.

NFL Network Insider Ian Rapoport reported that Chubb is expected to miss roughly six weeks, including Cleveland’s bye week, putting him on a path to return in November.

“What that ends up being, I don’t know,” Stefanski said when asked if the six-week timetable was accurate. “I know Nick Chubb, and I wouldn’t put a time frame on it yet.”

Chubb suffered the injury in the first half of Cleveland’s Week 4 victory when he was rolled up on from behind by Cowboys defensive tackle Trysten Hill, who was taken down to the ground by Browns guard Wyatt Teller. As Hill hit the ground, he collided with the outside of Chubb’s right knee, which bent in awkwardly. Chubb walked off the field and did not return to the action.

The loss of Chubb is a massive one. He was the NFL’s second-leading rusher in 2019, trailing Derrick Henry by only 46 yards. His 335 rushing yards in 2020 was second-best in the NFL after four weeks. He will be a massive loss to not only the team but fantasy managers alike.

Amazingly, with Chubb only getting six carries in Week 4, Cleveland finished with 307 rushing yards, its highest game total in 11 years. D’Ernest Johnson led the Browns with 95 rushing yards, and Kareem Hunt ran for 71 yards and scored two touchdowns. Even wide receiver Odell Beckham Jr. got in the mix by rushing for 73 rushing yards yesterday. Coming into the game, Beckham had 84 career rushing yards.

We know that Kareem Hunt will be the primary back for the Browns. Earlier this season, we noted that not only does Hunt have standalone value, but he would be a top-seven play if Chubb was forced to miss time.

However, the player we need to pay attention to in fantasy moving forward is Johnson. The 2018 UDFA had the best day of his career, and it is not even close. Before Week 4, Ernest has just five carries for 26 yards for his career.

Now, not every opponent is going to give up yardage like the Cowboys did on Sunday. Looking ahead, the Browns face the Indianapolis Colts and Pittsburgh Steelers in the next two weeks, which are brutal matchups. However, it’s now Week 5, and the injury bug has hit 99% of fantasy players at some point, so finding a running back with legitimate value right now is a few are far between opportunity.

Johnson is rostered in, checks notes, ah yes, 0.0% of fantasy leagues. That means not even his mother, who I am sure is a lovely lady, bothered to draft her baby boy. Now is his time to shine and gain newfound relevance in fantasy. He will be one of the hottest waiver claims this week on a team that wants to run the ball.

How much faith should you put in D’Ernest Johnson’s fantasy outlook moving forward?

The answer to this question is a bit tricky. From a pure volume aspect, Johnson is likely to see double-digit carries every week until Chubb returns to the field. In games with even average matchups, he will be an RB2 in those weeks. The downside is when they have a difficult matchup, as we discussed in the coming weeks.

The window for D’Ernest Johnson’s fantasy impact will be short, and matchups against the Colts, Steelers, and Las Vegas Raiders will make Johnson very hard to trust in half of the weeks he will be featured. In those games, he will be a shaky RB3. However, he is absolutely worth taking the shot and getting on your roster.