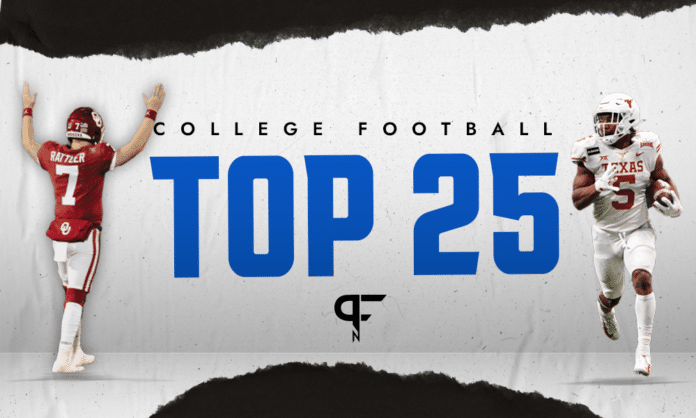 Only 25 teams can be recognized as the best in the league each fall. These are our preseason Top 25 College Football Rankings in 2021.

There are 130 teams at the Division 1-A level in college football. 130 teams, all vying for success and glory. But at the beginning of each season, and at the end, only 25 earn the distinction of being the best in the league. Every team covets a spot on the Top 25 College Football Rankings. But by definition, only 25 can earn that honor. These are our preseason Top 25 College Football Rankings.

Which teams make the cut in our preseason Top 25 College Football Rankings?

2020 was the Nittany Lions’ first losing season under head coach James Franklin. The unique circumstances may have played a hand in that. However, one could’ve argued that the 2020 Penn State team was too talented to fall below .500. There’ll be more pressure on Franklin in 2021, but the veteran coach has another talented squad on deck.

Sean Clifford is back at quarterback, and the hope is that he can rebound from a down year and reach his 2019 form again. He’ll benefit from having Jahan Dotson back as the leader in the receiver room. It also helps that he returns two stalwart offensive linemen — Mike Miranda and potential first-round pick Rasheed Walker.

On defense, the back two levels are loaded with talent. Brandon Smith and Ellis Brooks make up a promising linebacker unit even in the wake of Micah Parsons’ departure, while Tariq Castro-Fields, Joey Porter Jr., and Jaquan Brisker headline an imposing secondary.

The Horned Frogs have always been a respectable team under Gary Patterson’s watch, and that’s not going to change in 2021. Quarterback Max Duggan will be returning for his third season as starter, and he’ll have a dynamic RB duo of Zach Evans and Kendre Miller at his side. Quentin Johnston and Taye Barber return to the receiving corps as formidable weapons. Still, all eyes will be on former top recruit Marcel Brooks as he makes an anticipated positional switch.

Defensively, TCU demands respect as well. Their defensive line is loaded with past production and experience, with Khari Coleman, Terrell Cooper, Corey Bethley, and one of the 2020 sack leaders in Ochaun Mathis. As strong as that unit appears, the secondary may be even better. Tre’Vius Hodges-Tomlinson is one of college football’s top defensive playmakers, and he’ll be joined by Noah Daniels, La’Kendrick Van Zandt, Kee’yon Stewart, and T.J. Carter.

After lingering in the middling ranks for the entirety of the Steve Addazio era, the Boston College Eagles have moved on to Jeff Hafley — with exciting early results. Hafley helped lead the Eagles to a 6-5 record in 2020, with a 5-5 record in conference play. Boston College is trending up, and with Notre Dame now gone from the conference, there’s a window for this talented team to take another leap.

The returning talent is what makes Boston College so enticing — especially on the offensive side of the ball. Former Fighting Irish commit Phil Jurkovec will be the starting QB for a second year, with the hyper-explosive Zay Flowers and Jacksonville State transfer Trae Barry as his top weapons.

The Eagles also return four starters on their offensive line — including draft prospects Tyler Vrabel, Zion Johnson, and Alec Lindstrom. The defense isn’t as stacked, but the CB duo of Josh DeBerry and Brandon Sebastian should continue to impress.

If there’s one thing you can bet on come football season, it’s that Kyle Whittingham’s teams will be competitive. Since 2014, Whittingham’s Utah squad has finished inside the Top 25 College Football Rankings four times. In 2019, the most recent season not impacted by COVID-19, Whittingham’s team went 11-3 and ranked 16th in the nation. In 2021, they’re primed to potentially get back to that level.

One of the biggest upgrades in 2021 occurs at quarterback, where former Baylor starter Charlie Brewer will take the reigns from outgoing transfer Jake Bentley. He’ll have weapons like Brant Kuithe and TJ Pledger, and a strong offensive line with standouts like Simi Moala and Sataoa Laumea. Meanwhile, standout linebacker Devin Lloyd leads the defense, a unit that should be able to match the offense’s contributions.

Florida won’t be at the same level it found itself at in 2020. Replacing Kyle Trask, Kyle Pitts, and Kadarius Toney will be a tall task on offense and may prove impossible. Luckily, Florida has enough talent to stay relevant, and especially on the defensive side of the ball, they’ll likely see drastic improvement.

The offense has upside even without Pitts, but the defense is where the majority of the talent lies. Zachary Carter, Gervon Dexter, and Brenton Cox Jr. make up a scary pass-rushing unit, while Ventrell Miller anchors the middle of the unit. In the secondary, elite coverage defender Kaiir Elam will be joined by Trey Dean, Rashad Torrence, and 2020 four-star recruit Jason Marshall.

The SEC might not be ready for another year of Lane Kiffin and Matt Corral. The lows were low in 2020, but the highs broke through the ozone layer. In fact, rumor has it that Kiffin’s clipboard is still flying, collecting vapor droplets in the troposphere. Ole Miss’ offense has that high-flying potential, but it’ll be up to Corral to take the next step and lead it forward.

Corral doesn’t need an introduction; he might be the most talented QB in college football if he can reduce his turnovers. He’ll have quite a few weapons to work with, too. Losing Elijah Moore will hurt, but the Rebels still have Jerrion Ealy, Braylon Sanders, and Dontario Drummond. They also bring back several starters on the line, including Nick Broeker and Ben Brown.

The offense is where Ole Miss will find success. Defensively, they’re still a work in progress, and that likely won’t change in 2021. Nevertheless, they do have some talent to take note of. Sam Williams is a tools-rich edge rusher with a great deal of upside, while DB AJ Finley can also provide some momentum-shifting plays on the back end.

The loss of Ian Book might not resonate fully for Notre Dame until we see Jack Coan play. Book had his limitations, but time may show that he was an upgrade over the Wisconsin transfer. Nevertheless, Coan is coming to South Bend with a chip on his shoulder and something to prove. And he has the talent around him to at least make a run at proving it.

As usual, the Fighting Irish offensive line is one of the best in the nation, anchored by versatile starter Jarrett Patterson and Marshall transfer Cain Madden. Running behind this line will be dynamic ball carrier Kyren Williams. Meanwhile, superstar TE Michael Mayer will be a valuable safety blanket for Coan in the passing game.

On defense, Notre Dame’s strong recruiting performance has yielded positive results. Myron Tagovailoa-Amosa and Isaiah Foskey headline a stout front four, while Shayne Simon returns as a steady contributor on the second level. All this and the team’s best player still hasn’t been mentioned. Kyle Hamilton may very well be the best player in the nation. However, since the big question is at QB for Notre Dame, they fall down the Top 25 College Football Rankings

Is Texas finally back? We’ve been through this cycle before. So much so that no one can say for certain what the answer is. At the very least, we can say this: Steve Sarkisian seems to be a good hire on the surface, and the Longhorns have the necessary talent. If Sarkisian proves to be the right coach, this team could exceed its current billing.

Regardless of who the team starts at quarterback — Hudson Card or Casey Thompson — there’s a lot to like on both sides of the ball. Bijan Robinson might be the best RB in the country, and the receiving corps has high-level talent with Joshua Moore and Jordan Whittington. Plus, if Troy Omeire gets healthy, he can be the best of all of them.

On defense, there’s more to be excited about. The losses of Ta’Quon Graham and Joseph Ossai on the front line will hurt, but Keondre Coburn has some utility, and LSU transfer Ray Thornton should provide a pass-rush boost opposite Jacoby Jones. The secondary is stocked with playmakers like D’Shawn Jamison and Chris Adimora, but the team’s best player is linebacker DeMarvion Overshown — a restless playmaker with Round 1 upside.

That’s right. The mullets are back. Coastal Carolina was the darling of the 2020 college football season, but there’s reason to believe they weren’t just a flash in the pan. They may ultimately be back this year, led by star QB Grayson McCall.

McCall has visible talent and toughness, and he’s one of the better signal-callers in college football. He has a lot of talent to work with as well, with an offense that enlists WR Jaivon Heiligh and TE Isaiah Likely as its top targets.

Defensively, the Chanticleers are just as well-stocked. Jeffrey Gunter is a star on the edge, while C.J. Brewer provides nice three-down potential. Teddy Gallagher returns as one of the unit’s leaders, and all of the front seven will have ballhawk D’Jordan Strong behind them, providing assurances in the secondary.

The quarterback situation in Washington was one of the offseason’s biggest storylines. Nevertheless, even as Dylan Morris takes the job from five-star freshman Sam Huard, the team still has enough talent to compete, regardless of who’s under center.

On offense, Morris will have a strong offensive line to keep himself clean, led by mauling offensive tackle Jaxson Kirkland. He’ll also have a high-quality safety blanket at tight end in Cade Otton. Otton was productive last season and could be due for a career year ahead of his leap to the NFL Draft.

As solid as the Huskies’ offense can be, however, the defense is Jimmy Lake’s bread and butter. Former walk-on linebacker Edefuan Ulofoshio has grown into a steady playmaker, while Jackson Sirmon provides value beside him. The team also has an excellent cornerback duo in Trent McDuffie and Kyler Gordon. If defensive lineman Zion Tupuola-Fetui can return from his Achilles tear as expected, the unit can take yet another step up.

Next Page: Which teams are in the Top 10?