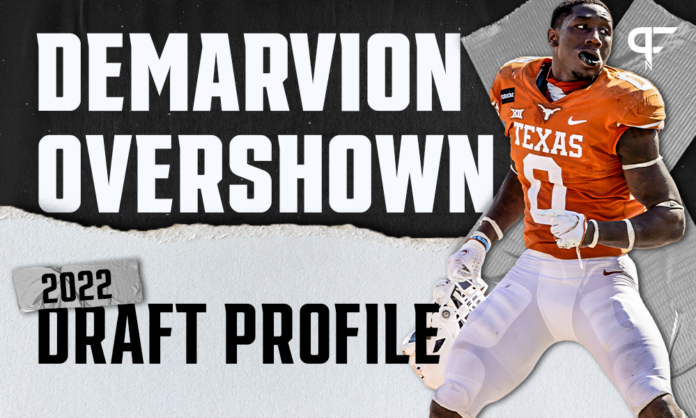 All Texas ILB DeMarvion Overshown knows how to do is produce, and that's something that makes his NFL Draft scouting report very exciting.

After making the switch to linebacker in 2020, Texas ILB DeMarvion Overshown has quickly become one of the most exciting NFL Draft prospects in the 2022 cycle. He owns a scouting report that has few parallels across the nation — how high is Overshown’s ceiling, and does he have LB1 upside in an unsettled linebacker class?

The 2022 NFL Draft already has a lot of established talent, but one position that remains relatively unsettled is linebacker. Alabama’s Christian Harris is widely regarded as the top linebacker to open the season. However, even his outlook is not a matter of consensus — the top spot is far from locked up. Thus, players with high upside demand attention in the conversation.

When talking about upside, few linebackers have more than Overshown. A former safety, Overshown looms at 6’4″, 223 pounds. Last year was his first at the linebacker position, and while he showed an expected lack of development, he also flashed astronomical upside. Can Overshown challenge for the LB1 mantle? Let’s take a look.

Right away, Overshown stands out amongst his counterparts. He has a long, rangy frame at 6’4″, and that range shows up in multiple phases. His length gives him immense disruption potential when stalking the backfield. He can lurk in the second level, rise up to snatch intermediate passes, and has the ball skills to make plays at the catch point.

Overshown is long, but his athleticism is what truly completes his profile. His explosiveness and stride lengths combine to form dangerous closing speed and range. He has definite twitch in his movement, and that twitch — paired with his size — allows him to cover ground quickly and suddenly. He closes in with incredible quickness when triggering on plays or blitzing down the middle, and he has excellent closing burst at the tackle point.

Going further, the Texas ILB has searing lateral explosiveness as well. He can adjust his tackling angles quickly, and with his speed and length, he can penetrate the backfield and wrangle ball carriers in pursuit. Just as Overshown’s athletic gifts help him in the box, they also provide value in open space. The Texas ILB can cover plays from sideline to sideline.

Among other things, Overshown has the lateral agility to slip past blocks and stay clean. He also moves with great hip sink in and out of direction changes, and he has some fluidity in his movement.

2020 was Overshown’s first season at linebacker. Thus, while his play is exciting, it feels right to temper one’s expectations when seeking refinement. Nevertheless, Overshown displayed promising flashes of mental acuity — the arrow is indeed pointing up in 2021.

First off, Overshown is an energetic, high-motor player who can dish out big hits. On the ground, when he’s confident in what he sees, he plays at a torrid pace. And in the air, he attacks the football and actively seeks to disrupt.

Beyond his disposition, Overshown gives off glimpses of processing speed. He demonstrates the ability to read the quarterback’s eyes and close in on targets. Additionally, he already has the awareness to pick up running backs slipping into open space. Closer to the line, Overshown has displayed the ability to instinctively swim through congestion and enter the contact window. He even flashes the capacity to rip smaller blockers away and leap back into tackles.

Overshown’s versatility also bears noting. The converted safety has the versatility and range to patrol the intermediate and deep ranges of the field. Moreover, he has some measured torso flexibility as a pass rusher, and his burst makes him a deadly blitzing threat.

Alright, we’ve gushed about Overshown’s potential. Let’s cool down a bit. As exciting as his upside is, he has some work to do in 2021. Most notably, Overshown is clearly still learning the linebacker position.

Overshown’s instincts, at this point in time, are questionable. He can be late to pick up receivers coming across the field and when reacting to receivers breaking inside. His feet can be faster and more sudden at times, and he can improve his efficiency of motion when changing directions.

Overshown sometimes bites on play-action fakes and occupies blockers, leaving the middle of the field open. He sometimes loses track of the ball in congestion, and his angles can be more consistent. Furthermore, He can be overly aggressive at times and sell out on option plays. But on the flip side, he can be indecisive when patrolling gaps and reading plays.

Additionally, Overshown will need to improve his play strength. Even with his length, he can’t always complete tackles in pursuit. Offensive linemen can easily handle his frame. He can better use his length to target and deconstruct blocks. Lastly, Overshown often fails to disengage in a timely manner and misses chances to stop big plays.

The hype around Overshown is not overblown by any means. As is the case with any new position convert, he does have room for growth. His processing speed and key recognition will need to improve in 2021. Honing those skills will be imperative in maximizing his range and versatility. But already, Overshown’s upside is evident and exciting.

With a discombobulating mix of explosiveness, twitch, length, range, and agility, Overshown has an athletic foundation that few players can match. He has the high motor to maximize those traits, and on top of that, he possesses inherent coverage experience from his days as a safety. He’ll have to keep getting stronger and more confident, but he has the makeup of a game-changing catalyst on the defensive side of the ball. The LB1 mantle is very much in play.

In an era of constant modernization, defensive chess pieces are in constant demand. Every team is looking for the next Derwin James, Isaiah Simmons, or Kyle Hamilton. And Overshown was targeted as such by countless programs in the 2018 recruiting cycle.

As a senior, Overshown was already a lanky 6’3″, 195-pound spectacle, with an overflowing stat sheet. In his final year at Arp High School, Overshown amassed 142 tackles, 14 tackles for loss, 5 sacks, 5 interceptions, 4 forced fumbles, and 13 pass deflections.

It comes as no surprise that Overshown was the 33rd-ranked prospect in the nation and a high four-star recruit. He had offers from all the blue-chip schools — Alabama, Clemson, Ohio State, Oklahoma, and LSU — but he chose to stay in-state and join the Longhorns.

It took some time for Overshown to earn a role in Texas’ defense, both due to injuries and positional ambiguity. He played in nine games as a true freshman in 2018 but only logged 1 tackle while playing mostly on special teams. In 2019, Overshown played in eight games while earning a start but missed a third of the season due to injury. Still, he managed to rack up 18 tackles, 7 tackles for loss, 2 sacks, a pick, 3 pass deflections, and a forced fumble.

In 2020, the Longhorns decided to use Overshown — who was now 6’4″, 215 pounds — in a different way. They switched him to linebacker and the returns came immediately. Overshown started all 10 games in which he appeared and produced at a massive clip. Over that span, he accumulated 60 tackles, 8 tackles for loss, a sack, 2 interceptions, 7 deflections, a fumble recovery, and 2 forced fumbles. He ended his transitional season on a high note, earning Defensive MVP honors against Colorado in the Alamo Bowl.

Overshown still needs to keep refining his role at linebacker, but it’s hard to contain one’s excitement around the Texas ILB. What makes his 2020 performance even more impressive is that Overshown dealt with back pains throughout the year. He received surgery to fix the issue this offseason, and the hope is that he’ll be more comfortable and composed as a result.

If Overshown stays healthy, he has one of the highest upsides on the draft circuit. As his history shows, he’s a habitual producer. With his skill set, he naturally fills up the stat sheet. And if Overshown can become more comfortable and confident in his role as a linebacker, he can be an electric playmaker for the Longhorns and a sure-fire Round 1 pick.

The Texas product isn’t quite there yet, and it’s not guaranteed that he ever will. But the potential is impossible to ignore.