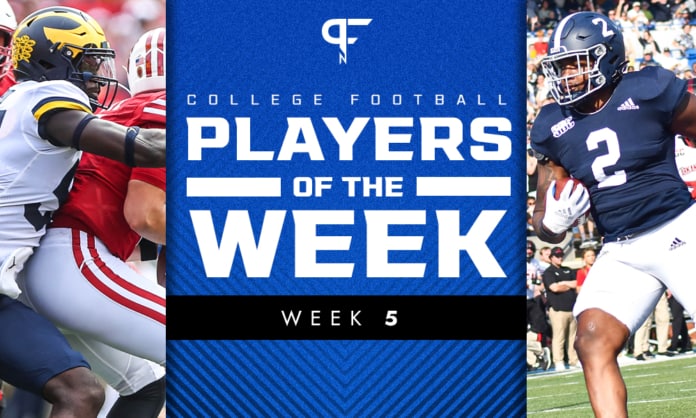 Logan Wright and David Ojabo headline Week 5 of the College Football Players of the Week thanks to their respective dominant performances.

At this rate, I’m not sure how college football tops itself. Week 5 continued the trend of thrilling games, and the players participating showed out once again. You’ll notice a theme with the College Football Players of the Week in Week 5 — if you toted the rock, you had a better chance this week than most.

Running backs stole the show, and some of these college football players were extremely efficient this week.

Alabama dominated No. 12 Ole Miss early and often, and Robinson gave them a spark on the ground. He rushed for a career-high 36 times for 171 yards and 4 touchdowns to lead the Tide’s rushing attack. The Rebels never had an answer, and they struggled taking down Robinson whenever he touched the football.

Ohio finally got in the win column against Akron, and they can thank Tuggle for carrying them there. The Bobcats only gave him the ball 17 times, but he turned that into 201 yards (11.8 yards per carry) with a touchdown. It hasn’t been pretty for Ohio since Frank Solich retired, but they have something to celebrate in Week 5.

If you’re a fan of the AAC, then you’re probably extremely confused. ECU’s looked bad through the first four games thanks largely to a wildly inconsistent offense. Mitchell ensured things would be different on Saturday, leading the Pirates to a 52-29 win over Tulane. He finished with 15 carries for 222 yards (14.8 ypc) and 2 touchdowns.

If you’ve paid attention to the Nevada Wolf Pack at all, you’d know it’s surprising to see Taua on this list. With Carson Strong and Romeo Doubs on the team, Nevada thrives on passing the football. Against Boise State, they relied on an efficient ground attack. Taua was still limited in his touches (12), but he averaged 10.3 yards per carry and scored twice to help the Wolf Pack pull out a 41-31 win on the road.

It’s safe to say that if you average over 20 yards per carry, you’re doing something right. Or should I say Wright? Logan Wright helped the Eagles’ offense explode in a 59-33 win over Arkansas State thanks to his 208-yard, 2-touchdown performance. Oh, and he did it on just 10 carries, which averages out to 20.8 yards per carry. Yep, that’s right, 20.8 yards per carry — efficiency at its finest.

Whether or not you stayed up Friday night to watch BYU beat Utah State is irrelevant because Tyler Allgeier put on a show regardless. The Cougars’ star is known for breaking off big runs, and he did that frequently this weekend. He nearly averaged a first down on his 22 carries, rushing for 218 yards with 3 touchdowns on his way to being one of the College Football Players of the Week.

College football’s top rusher for the weekend goes to Chase Brown, who rushed for 257 yards and 2 touchdowns to help the Illini avoid another bad upset against Charlotte. With the 49ers pressing Illinois early in the game, they turned to Brown, who averaged nearly 10 yards per carry. It was enough to help the Illini win 24-14.

Josh Heupel’s blazing-fast offense has produced some new stars for the Volunteers, and one of them is Tiyon Evans. We’ve been waiting for a breakout game from him, and he finally delivered. Heupel ran his starting back just 15 times, but a porous Missouri defense yielded 156 yards and 3 touchdowns to him alone. Tennessee scored 62 points as well in a statement win.

If you didn’t have Bijan Robinson on your Heisman ballot yet, he better be at least in your top five now. Texas needed a big win against TCU, and Robinson gave them that. He rushed a career-high 35 times for 216 yards and 2 touchdowns, but it was a handful of runs that had people talking.

NFL scouts already have him on their radar, and some of the plays he made proved why. From speed to power, Robinson has the perfect blend of everything you’re looking for in a running back. Saturday showcased why teams will be lining up for his services at the next level.

College Football Players of the Week | Others

Running the ball wasn’t a requirement, as some of the other positions also put on a show.

Michigan made quite the statement on the road against Wisconsin, and the defense continued making life difficult for the opposing offense. Ojabo had a coming-out party in Madison, and Michigan’s defense suffocated Wisconsin’s offense. Their new star defensive end finished with 7 tackles, 2.5 tackles for loss, 2.5 sacks, and a huge forced fumble.

College Football Players of the Week typically fill up the box score, but not always. Ahmad “Sauce” Gardner” had another game in which he dominated outside of the stat sheet. He only had 1 pass defensed, but he had a big interception to help lead the Cincinnati defense. The Bearcats relied on their defense to jump out to a 17-0 lead, and they kept Notre Dame’s offense largely in check the entire game. Now, the Bearcats are thinking about the playoffs.

One guy that Ole Miss needed to block was Will Anderson, and they didn’t do a great job. He made several big plays for the Crimson Tide defense, including 2.5 tackles for loss and 2 quarterback hurries. With Christopher Allen lost for the season, Anderson continues to step up for Alabama, and opposing teams still don’t have an answer for him.

Drake London isn’t the most physically gifted player in college football, but this kid competes harder than anyone. While he won’t create a ton of separation in his route running, London turns 50-50 balls into 70-30 in his favor. His ability to compete at the catch point and adjust to passes makes him the leading receiver in the country, and he added 130 yards and a touchdown to his résumé.

Air Force is quietly having a good season and remains a contender in the Mountain West. Sanford and the defense played great this weekend, and the Air Force linebacker filled out the box score. He finished with 8 tackles, 3.5 tackles for loss, 3.5 sacks, and 1 quarterback hurry. With everyone focused on Nevada, Boise State, San Jose State, and Fresno State, Air Force could be a surprise team in the conference this year.

The race for the title of QB1 in the 2022 NFL Draft continues to be an intense battle, so that means guys like Malik Willis must frequently strive to be one of the College Football Players of the Week. Liberty took it to UAB in their new stadium thanks to their quarterback, who completed 13 of his 19 pass attempts for 287 yards with 1 touchdown. He also wreaked havoc on UAB’s defense with 144 yards on just 15 carries and 2 more scores.